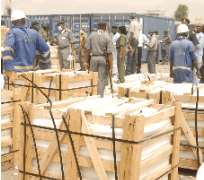 Some of the cartons of arms being offloaded by security operatives.

President Goodluck Jonathan yesterday vowed to unmask those behind the intercepted 13 containers loaded with explosives and other dangerous weapons.

Dr. Jonathan also promised to unravel the country the weapons of destruction originated from.

The president, who spoke through the National Security Adviser, Major-General Andrew Owei Azazi (retd), who was at Apapa Port, Lagos, to assess the weapons said government would unravel those behind the dastardly act.

General Azazi said the citizens should not panic as the Federal Government would do everything possible to ensure adequate security and protection of everybody in the country.

He noted that eventhough some agents of evil were trying to destabilise the country, they would not succeed as the Federal Government had put certain security measures in place to protect security of lives and property.

On whether the armaments had anything to do with the 2011 general elections, he said he could not draw such conclusion now saying that after investigations, Nigerians would know what happened

His words: 'The only thing we can say is that some armaments were discovered at the ports by the security agents. We don't want to make any conclusion with regard to where they come from or where they are going because we need a lot of verifications and at the end of the day, Nigerians would know that this is what it is all about. We have discovered them and we will do all that is required to ensure that everybody is protected. We have a very good procedure in the ports and that is why this was discovered. I don't know whether it has anything to do with the forthcoming general elections and would not want to make such conclusion because investigation is still on- going and at the end we will tell Nigerians what happened.'

Azazi, who was flanked by top military personnel, warned that there would not be hiding place for criminals to operate in the country.

However, security was beefed up around the container terminal where the evil containers were packed by heavily armed joint security operatives. Daily Sun reliably gathered that the arm-carrying containers had been in the Port since October 2, and that all the documents meant for its transfer to a bonded terminal have been processed.

The containers, according to a security source, contained rocket launchers, hand grenades and ammunition.

A dependable senior police officer who confided in Daily Sun said the inscription on the rocket launchers would assist the Anti Bomb Unit and some security experts to trace the source of the weapons.

The police source revealed that the importation of the explosives and other weapon might not be unconnected with the upoming election.

As at press time, the Commissioner of Police in-charge of Anti-Bomb Unit and his men were on the ground, moving round with Amoured Personnel Carrier (APC).

Also on ground were the Area 'B' Commander, Mr. Kenneth Ebrimson and Divisional Police Officer (DPO), Apapa, Mr. Muhammed Ali, who were patrolling the entire Apapa. They were said to have been directed by Deputy Inspector-General of Police in-charge of operations, Mr. Audu Abubakar, who was also at the scene to cordon off the area. When Daily Sun visited the scene, there was apprehension as heavily armed joint security operatives were seen parading the place. Some workers at the Apapa Wharf closed shops for fear of possible explosion.