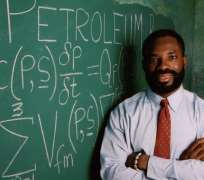 The man with wisdom is a shining torch that sheds light in our darkness and guides us out of our ignorance. I am often asked: "How do we build a stronger Nigeria through technological innovation?"

I came across the answer in 1963 sitting on the verandah of our house along Gbenoba Road, Agbor, Midwest Region. I was silently reciting a quotation on the masthead of the newspaper called the West African Pilot. It read: “Show the light and the people will find the way.”

Because I was nine years old, I did not understand the deep meaning of those wise words. I now understand “the light” as a metaphor for knowledge, and “showing the light” to mean increasing the intellectual capital, the sum of human knowledge possessed by 6.6 billion men, women, and children. We find "the way" when we've brought to fruition our dream of eradicating poverty, discovering the cure for AIDS, and inventing the internet for email communication.

A long time ago, a man asked his children, “If you had a choice between the clay of wisdom or a bag of gold, which would you choose?” “The bag of gold, the bag of gold,” the naïve children cried, not realizing that wisdom had the potential to earn them many more bags of gold in the future.

The wealth of the future will be derived from developing the intellectual capital—the clay of wisdom—and the innovations of the younger generation to make Nigeria stronger.

Should Nigeria migrate from oil to soil, as is often suggested. I think not. It should leapfrog into the Information Age. Nigeria cannot return to an agricultural age because the West is being urbanized, the East is being eroded, and the North is being desertified. A Nigeria without oil must make the transition to a knowledge-based economy. Nollywood can redefine 21st century Africa as the continent of arts and innovation.

If Nigerians have an average of three children per couple, it will become the world's third most populous nation in 50 years. It will lag behind China and India, but will have a greater population density.

Where will we find farmland? My grandfather's farmland was located where Onitsha market now lies. For countless centuries, my Igbo ancestors were farmers. Sons walked in their father's footsteps, ploughing the same land. Their life expectancy was about 37 years.

Daughters married early, had as many children as they could, and became young widows. My mother married days after her 14th birthday and gave birth to me six days after her 15th birthday. She was born in colonial Africa, where she counted her age on her fingers and toes and by her age-grade affiliation.

Yet she had a son who could count the ages of humanity on his supercomputer, which occupies the space of four tennis courts. Her son's supercomputer computes and communicates as an internet and sends and receives answers via e-mails to and from 65,000 subcomputers.

My father and I, followed by my son, broke the tradition of walking in our ancestors' footsteps. My father was a nurse, and my son and I are computer scientists. All three of us abandoned the soil to work in knowledge-based industries.