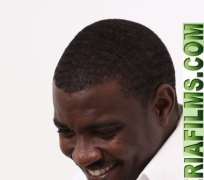 The squabble between the Ghanaian movie industry and that of Nigeria is getting nastier by the day. The latest casualty to fall victim to the rift between Ghallywood and Nollywood is Ghanaian Actor John Dumelo who was allegedly arrested in Nigeria a few days ago.

Information available to us indicates that John was apprehended on set in Nigeria whiles shooting a new movie for a female Nigerian producer. The sources disclosed that the actor was arrested for refusing to pay an amount Ghanaian actors and producer are supposed to pay before they are permitted to act in any movie. John Dumelo confirmed the incident in and exclusive interview with peacefmonline and explained that there was an attempt to arrest him but he was not really arrested.

“Yes they nearly arrested me, it wasn't an arrest as a matter of fact but I was nearly arrested.” Asked what the reason for his attempted arrest was, John said “It is because of this Ghana-Nigeria thing that we are supposed to pay something before we are allowed to shoot in Ghana or in Nigeria”. He further explained that he went to Nigeria to shoot a movie a few days ago and while he was on set, some members of the producers association in Nigeria came with the police to arrest him for shooting in Nigeria illegally.

According to John, they claim that the producer who brought him to Nigeria did not pay some association for bringing a Ghanaian there. “It was one of the associations which brought in the police. The police didn't come there on their own, but eventually I wasn't arrested. I was nearly taken to the police station for whatever reason I don't know”.

“For me I don't have to pay anybody any money, because it was the producer who brought me there. So if there is any problem it is the producer they should talk to”. On how he was able to leave the country without been harmed or manhandled John said “Oh! I managed to finish filming the next day and then I left”. However the president of the Actor Guild of Nigeria Segun Arinze has also confirmed the incident saying John was not arrested but he was stopped from working in Nigeria without permit. Speaking on Peace FM's “Entertainment Review” program he said even though he was not in town when the incident occurred he was told on his return that John was not arrested. “Nobody arrested John Dumelo to the best of my knowledge I know he was stopped from working but he wasn't arrested. That will be a bit of an exaggeration”.

Segun said there is no problem at all and that everything is under control. He also added that three days after the incident, The Actor Guild of Nigeria and producers had a meeting with the Ghana Actors Guild and the Ghanaian producers to solve the problem. “We are brothers and we will forever remain brothers. I don't see anybody been arrested. It is a free enterprise; we just need to sort a few things out”. According to Mr. Arinze plans are far advanced for both parties to have a final decisive meeting either in Lagos or in Accra.

Segun used the opportunity to apologize to Ghallywood actor John Dumelo. “To John Dumelo I will say we are deeply sorry for what happened. He was embarrassed we are sorry about it, and believe me, we will work it out there is nothing to worry about”.

When “Entertainment Review” host Kwasi Aboagye asked Segun why Ghanaians and Nigerians are demanding some payment before they are allowed to act or shoot in their respective countries, he answered “Nobody has asked anybody to pay anything. I think there has been confusion in the system, some people are doing this to profit and be mischievous about it, and we will defiantly get them and flush them out. We are all one; I go to Ghana to do movies and Ghanaians come to Nigeria to work. I don't see why we should be losing sleep over this I think it is something we can definitely sort out”.

This whole Ghana-Nigeria rift started when Ghanaians reportedly demanded $1,000 from Nigerians and Nigerians also threatened to demand $2,000 from Ghanaians. This has resulted in some gruesome exchanges between Ghana and their Nigerian counterparts. Earlier on in the year, actors Van Vicker, Majid Michel and others also faced similar situation in Nigeria and they had to return to Ghana for their own safety.

John Dumelo's incident seems to be a retaliation to the Film Producers Association of Ghana (FIPAG) who seized the camera of a Nigerian crew who were allegedly shooting in Ghana with the express permission few months ago. The crew, who were shooting on the Spintex Road in Accra, refused to identify who the producer was, when the FIPAG members confronted them with the police. They then decided to confiscate their camera until the producer owned up.