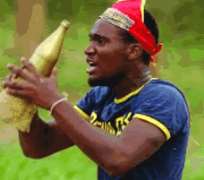 After a long drawn battle in the jungle of Omo Forest in Ogun State, a winner has finally emerged in the Gulder Ultimate Search Season 7. He is Ekiti State-born Oluwaremi Oyekunle, 23. In a tension soaked challenge that left viewers gasping for breath yesterday, Kunle was declared winner of the reality TV show, beating two other contestants, Adeleke and Atiku, in their tracks.

The journey to the finale began on Thursday when 21 year-old Chukwuma Anyanwu lost out in the day's second challenge that was nerve-racking. They had to be called out for the second task because all the four succeeded in the first challenge, where human endurance was put to test.

Yesterday, however, the three contestants marched to the task zone around 4pm, ready to do battle with each other. The taskmaster, Bob-Manuel Udokwu, welcomed and praised them for being able to surmount all the obstacles, threats and pains, to get to the finals. He explained the tasks, which, according to him, were going to be in phases. The final challenge took a combination of mental and physical strengths. Time was also a crucial factor in determining who the ultimate hero would be.

After the countdown, Atiku was the first to shoot forward. He was able to hook his bundled plates, climbed over the wooden wall, landed safely and ran straight into the bush to sort out his prototype box. He began to set the two boxes that were needed to complete the scale with which he would climb up to cut down the suspended bridge that leads straight to the champion zone. Whoever gets to the champion's spot would lift up the hero's flag that was kept on the floor there, to signify his triumph.

However, after about 30 minutes on the box, the ever-smiling Oyekunle shocked the anchorman, Udokwu, when he suddenly announced that he had completed all his boxes. At this time, Adeleke and Atiku couldn't just figure the way out. The first box that Adeleke earlier constructed collapsed in his face and he became aghast.

The anxiety that had accompanied the final showdown melted away at exact 4 30pm, when the slimmest of the three warriors, Kunle, ran wildly to the beam, took his machete, set his three boxes, climbed over them, cut the rope that tied the bridge to the beam, ran across it like a wild cat, and picked the pole, as he jumped inside the champion' spot and hoisted the pole with the champion's flag.

Kunle's countenance changed, his face contoured, as he started shouting and running madly across the field, asking rhetorically if he was the Ultimate Hero.

In the heat of the euphoria, Udokwu held Kunle's hands and declared: 'By the power bestowed on me by the Council of Elders in Omo Forest, I declare you, Oyekunle Oluremi, as the Ultimate Hero we have been searching for this past 21 days. Therefore, you are pronounced the winner of the 2010 Gulder Ultimate Search. Take the king's goblet, go and celebrate'.

Tonight, at the New Expo Hall of Eko Hotel and Suites, Victoria Island, Lagos, all the 12 warriors, including the Last Man Standing, Oyekunle, will be honoured and presented with their prizes.