OUR FEARS OVER JONATHAN, BY BISHOP ORKWAR 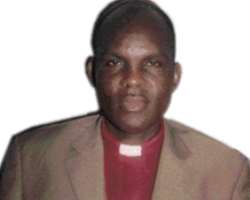 In this interview, Benue State Chairman of Christain Association of Nigeria (CAN), Arch bishop Yiman Orkwar x-rays the nation and submits that the country still has a long way to go in terms of development except God intervenes.He spoke to ROSE EJEMBI in Makurdi. Excerpts

Nigeria has not come of age
No, we have not come of age in everything. In terms of development. You can see that we are still lagging behind , in education, you know we are still lagging behind. In terms of health and other areas, you know that we are far behind. And in the electoral process, we are still behind, because we still have rigging and all kinds of things. So, if one were to look at Nigeria critically and holistically, you'll know that we have not yet arrived.

We are not where we started, and it is true we have not yet arrived, where we are supposed to be. But on the scale of implementation, one would say that we are a bit of a disappointment because we should have been farther in the area of development than where we are now, based on the fact that God has blessed us with both human and material resources to make us a great nation..But we are hoping that may be in another 50 year things will change.

Going astray
When you don't have a consistent system, a lot of things can go wrong, particularly when you have a situation where the military will rule, at a point they give to civilians, democracy would be established, after a while it would be interrupted by the military and so on. The system has not been steady. From parliamentary we went over to presidential system and so on. And, since the system was not steady and consistent, something else crept in, and that is corruption which is the bane of our society. That is what has actually dealt a lot of blow to the development of this nation. It has affected every area of our life. Corruption. It is in every sphere and it has actually stunted our development. So, you see where we missed it is because of inconsistency and allowing corruption to sneak in quietly. From the military to the politicians, they are all corrupt. That is the problem with this nation.

The military leaders were corrupt and they are still corrupt. But then, with what the politicians are now doing, you will find that their own corruption is more monumental than the military. If the military were not corrupt and were doing things correctly, at least they have ruled this nation with more number of years than the civilians and therefore things would have improved for the better, if only politicians were corrupt. But for us to be where we are now with all the blessings that God has given to this nation, clearly shows that our main problem is leadership. Leadership has been our problem in this country. It is true as many people argue that even we the followers have our own problems, because most of the time, we allow things to go that we shouldn't have allowed as people. And the more you allow corruption to continue and you tolerate everything, the more the system gets worse.

Hope for a better Nigeria
There is a ray of hope. As we celebrated the country's golden jubilee on October 1, 2010, this is the time of release and we are expecting that it would be a time of restoration, of getting back what we have lost, a time that God will intervene for this nation. And as a people, God is saying 'let my people go'. All the corrupt politicians, all the corrupt leaders whether military or wherever they are in every sphere of life; in the academics, business, everywhere, in the banking system or even in the church or mosque because there is also corruption in religious circles; Time has come and the hope is that God will intervene and the people should rise up and stand on the truth.

Free and fair elections in 2011
As a religious leader in Benue State I am following national events, because I am also a member of the CAN NEC, and also the Vice Chairman of the northern CAN. So, I am aware of whatever is happening in the nation. We still have our fears even with all the assurances. Fears, because when the President was talking about giving us a credible, free and fair election, one was hoping he would not participate so that he can be fair to everybody. But when you are participating in a process yourself how fair can you be because nobody wants to go into an election to lose out.

When you are going into an election as an incumbent, and you say you want to win, so many times, even when you say you don't want to compromise, as a human being you have your weaknesses and there is a tendency that you might compromise to your own advantage. So, that is the fears of some of us, because if the president was not participating, definitely we will have a lot of hope that he will stand his ground to make sure that the right things are done. He has appointed a credible person as INEC Chairman but every one of us know that the thing was beyond Iwu as a person; and the thing is also still beyond Prof. Jega because the participants matter, the electorate matter, the judiciary, the politicians and all of us matter.

We all have a stake and we have our roles to play for the election to be a success. But when government is determined that it should be a success, there are certain things it can do to make it a success. That is when government is unbiased. But the moment you are contesting election, you are already biased, because you are participating under a political party platform, and you have your own interest. So, we are only hoping that he will be able to live up to his own consistent promises of a free, fair and credible elections. But we have our fears now, with what is happening.

Because when he was doing that, people were watching and from what we were hearing from the grape vine, people started adjusting thinking that things might be very tough for riggers this time. But the moment he declared, what we are now hearing is that now that the President also wants the thing, it is going to be more or less as usual. Therefore, for us to avoid all of these; rigging, snatching of ballot boxes, violence, massive thumb-printing and all of that, let's go for the electronic voting. At least, that will eliminate the issue of snatching ballot boxes and massive thumb-printing. At least it would be one man one vote if it is electronic voting. Even if there are other areas of technical rigging and whatever, but at least, it would be minimised. That is how some of us look at it. If it is going to be the same system of voting, then forget it. There will be nothing like free and fair election in 2011.

Presidenital aspirants
The throne belongs unto God and God knows who is going to be there. Perhaps it might be none of the names you have mentioned. You remember when God sent Samuel to the House of Jesse to go and anoint a king when Samuel arrived, Shama and the other brothers of David were there, and by human standards, they were fit and Samuel would have anointed any of them king but God rejected all of them because God does not judge by outward appearance but the inward beauty (the heart). And then Samuel asked Jesse if these are all his children and he said, 'no, it's remaining one young boy who is looking after the sheep in the bush.'

And Samuel said, 'I will not sit down until they bring him'. When they brought David, a little boy of just about 17 years, he said this is him, anoint him king, and David was anointed king in the midst of his brethren. Who were older than him and who were already warriors. So, it is true when you are talking about the polities of this nation the names you have mentioned, but God might be looking at it from a different dimension all together. All the people you have mentioned have their strengths and they have their own weaknesses. If I are to analyse them one by one, you'll discover that as far as I am concerned, they have their own weakness more than they have their strengths. We are still praying for this nation that in the end, God will give us a leader that from this 50 years will take us to the path of honour, path of righteousness, path of development. That is our prayer and we know that God has the throne. The Bible says, He giveth to whom so ever we wills.