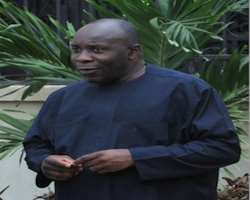 San Francisco, Oct 19, (THEWILL) – Action Congress of Nigeria (ACN) governorship candidate in the 2011 election, Senator John James Akpanudoedehe has obtained a court injunction restraining the Nigerian Police Force including the Inspector General of Police (IGP) and the Commissioner of Police (CP) in Akwa Ibom State from arresting or detaining him following its investigations into the murder of Mr. Paul Inyang, pending the determination of the application before it.

The Court Order made available to THEWILL was granted by Hon Justice S. E. Aladetoyinbo and states in part that:

"a) The Inspector General of Police the Respondent or any member of the Nigerian Police Force who are servants and agents of the Respondent are hereby restrained from ARRESTING AND DETAINING the Applicant (Senator John James Akpanudoedehe) in respect of investigation or further investigating of the death of late Mr. Paul Inyang pending the determination of this application coming up on the 1st day of November 2010, in other words, the status quo should be maintained pending the determination of the motion on notice.

“b) The proceedings of this Court should equally be served on the Commissioner of Ploice, Akwa Ibom State."