I WILL PROBE ONI â€“ FAYEMI 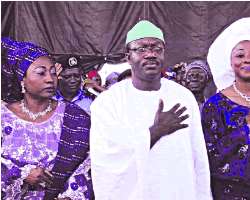 A new era dawned in Ekiti State yesterday as Dr. John Kayode Fayemi was sworn in as the third elected governor of the 14-year-old state with a promise said there would be a comprehensive review of what has transpired in the last 42 months of the ousted Governor Oni's administration.

This followed the eclipse of the 42-month-old administration of Engr. Segun Oni pronounced illegal by the Appeal Court, sitting in Ilorin  which declared Fayemi as the rightful winner of the 2007 governorship election and April 25, 2009 and May 5, 2009 re-run polls he contested with Oni Friday.

Although the new governor promised that there would be no recrimination or retaliation against the 'usurper' regime, he explained,'this is with a view to strengthening the fabric of democratic governance and correcting the ills of the past, not an exercise in witch-hunt.' And to show that the refrain of a new dawn is here, which dominated his inaugural speech, was no mere political symbolism, the new governor pronounced far reaching policies and welfare package for the people of the state.

Among these are: free education for primary and secondary schools pupils and a review of recently jacked up fees of the state-owned tertiary institution; free health programme for children below age of five, pregnant women, physically challenged and the aged. Also among his 8-point agenda, which he promised to implement with vigour are massive job creation, modernization of agriculture, improvement of infrastructure, provision of adequate security, tourism and industrial development, promotion of gender equality and women's empowerment.

In line with this, he ordered that all Permanent Secretaries in the state civil service should revert to their positions as at May 28, 2009 immediately, while suspending all irregular civil service appointments.

At a colourful ceremony held at Palm Spring Housing Estate along Iworoko Road, Ado-Ekiti, the state capital, the new governor, who was dressed in immaculate white lace material with a matching green colour Awo cap, took the oath of office at exactly 3.10pm with his wife, Bisi, standing by his side.

His deputy, Mrs Olufumilayo Olayinka, was the first to have the oath administered on her by the state Acting Chief Judge, Justice Silas Oyewole at about 2:48pm.

Addressing the people of the state, Governors Adam Oshiomhole, Segun Mimiko and Raji Fashola implored the people of the state to support the new governor for the economic and infrastructural development of the state to succeed. Delivering his inaugural speech, Dr. Fayemi said, 'From the dismal tunnel into which electoral robbery has drawn our beloved state, made worse by the impunity of the violators of our collective rights to political choice, their Lord Justices of the Appeal Court have rescued our state and delivered your voice and choice back to you, the people of Ekiti State. It is not Kayode Fayemi and Funmi Olayinka who have got victory here today. This struggle has never been about us. It's been about you and the corporate sovereignty of Ekiti people.'

Speaking further, Fayemi said: 'Today, we enter into sacred social contract with you, our people. Let this message be heralded in every corner of the our beloved state, let it be echoed in the four corners of this great country and beyond the shores of Nigeria.' He, however, paid tributes to lovers of the struggle, especially those who lost their lives in the course of fighting for the restoration and the revalidation of his mandate.