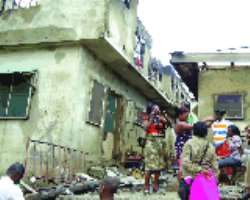 Shop owners and occupants of Litigo Shopping Plaza and two adjoining buildings had an unusual caller that brought them sorrow and pains a month ago. They got the surprise of their lives as fire broke out on the buildings and razed everything. As traders lost shops and goods, occupants lost homes and appliances and means to peace.

The incident was at Oluti on the Old Ojo Road, Oriade Local Government Area of Lagos State.

The fire, according to people in the neighbourhood and victims, started in the early hours of the night at 8.15pm. The time of the incident made it very hard for rescue to come the way of the victims. That fateful day was September 16 when fire engulfed the plaza, and later extended to some buildings around.

The inferno that lasted for about four hours triggered a season of woes for the victims most of whom were still on their way home from the day's business. The occupants hopes of arriving home to rest after their toil were dashes and shattered as they got home to see tongues of flame on their homes.

While some of the shop owners had already locked up their shops and gone home after the day's business transaction believing to come back the next day to continue, their peace was interrupted by frantic distress calls by people nearby that fire was all over the place. Like a nightmare, the watched as the tongues of fire licked all they had laboured for over the years.

Eyewitnesses said the fire started from one of the shops at the ground floor of the plaza. They suspect the fire caused an explosion and got heightened by inflammable chemicals alleged in manufacturing hair cream in the shop. It did not take long before the fire uncontrollably spread through the entire shopping mall and nearby buildings.

Properties lost to the fire were estimated in hundreds of millions with so many families rendered homeless.

Machines, computers, printers, books and other valuables, sewing machines, fridges, televisions, deep freezers, gas cookers, and many more were lost in the inferno, including musical equipment of a church located there.

Every item in the 27 shops in the plaza according to sources was destroyed by fire. The prominent Litigo Plaza that has over the years remained shoppers place of delight in the area to the extent the bus stop there is named after it was gone in a flash.

The plaza had restaurants, saloons, fashion shops, printing shops. About six churches there were not spared.

The fire engulfed the entire plaza immediately it gained possession of the building beside it and totally reduced the upper floor to ashes. Nothing also was rescued from the homes.

At the time Saturday Sun visited the scene victims were still swimming in their thoughts and tears. They were simply bemused and could not explain much on what befell them.

Tears couldn't answer all the questions they asked while crying to God for help.

But among the victims, there is a feud over who is responsible for the disaster. Some of them accuse the shop where hair creams were allegedly manufactured that stored volatile chemicals for bringing the disaster on others. One of the pastors that operated a church at the shopping plaza was involved in war of words with the owners of the suspect shop.

As some victims stake stock of their losses, Mr. Franklin Chijindu who told Saturday Sun that he was not around when the incident occurred explained that: 'I left my shop at about 1.30pm to Balogun for marketing. I came back about 3pm and went out again to Oluti bus stop where he was until he got the call that disaster had struck.

Chairman of the plaza, Mr. Odumkpa Cletus who was also in a very sad mood over his lost properties said 'there was no electricity supply at the time of the fire. In fact I can't say the cause of the inferno because I was not present, I was at home. But after investigation we will unravel the true cause of the fire.'

One of the victims, Mr. Sunday Augustine Chukwu an indigene of Isuochi Local Government Area of Abia State was devastated as he narrated that his international passport with a valid China visa with which he ewas preparing to travel were burnt in the fire. my visa which I was supposed to use to travel to China this week for business. Where do I start now? I have lost valuable properties even the money I kept in the shop.

Even my younger brother also lost his visa. He won a visa lottery and he was preparing to travel to America soon.

'Why now? In fact I'm short of words I don't know what to say now. Imagine I was coming back from my shop at Mandalas Lagos Island after a long day's job to go home. Unfortunately my neighbours starting calling me on the phone to inform me about the sad news indeed it's a sad moment.

Another victim, Emeka Chukwu, 21, described the incident as 'the saddest moment of my life. My elder brother lost everything in the fire. Our greatest regret is our visas. We are homeless but I pray that the Lord would come to our aid regarding our lost visas.'

The 73-year-old landlady fondly called Mama couldn't help crying. 'What will I do everything is gone. The first floor has been reduced to ashes. Where will I get money to build another house, she asked nobody in particular.