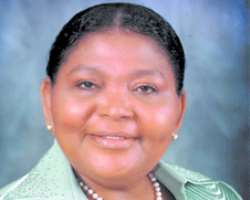 When Justice Dan Abutu sentenced former Oceanic Bank Plc managing director, Mrs. Cecilia Ibru to 18 months imprisonment last Friday, after the accused pleaded guilty to three of the 25 charges brought against her, he made a pronouncement: The convict should be taken to prison and after two hours she should be taken to hospital.

Saturday Sun gathered that as the judged order, Mrs. Ibru was taken to Kirikiri Prison, Lagos from the court premises, after the judgment and thereafter moved to what would serve as her prison cell for now, after she was book as a prison inmate. The former bank chief executive was moved to an elite medical centre, Reddington Hospital, Victoria Island, Lagos, where he is receiving treatment for an undisclosed ailment. She would remain in the hospital until doctors certify her fit to be discharged.

The Reddington Multi-special Hospital, located at 12, Idowu Martins Street, Victoria Island, Lagos, is a newly built nine-floor medical centre. It is on the site of the previous renowned Cardiac Centre and provides fully comprehensive tertiary hospital solution in all medical fields.

Investigation revealed that a standard ward in the hospital goes for between N30, 000 and N90, 000 per night. One of these rooms, which the accounts officer referred to as Josephine Ward, goes for as low as N30, 000, for Nigerians, while the prestigious Royal Suite goes for N90, 000 per night.

When Saturday Sun sought to know why Mrs. Ibru is still in hospital, one week after her sentence, the Lagos Prison Command Public Relations Officer, Ope Fatinikun, said that the law permits that. According to him, the prisons activities are guided by the law, adding that the prison was only obeying the instruction of the judge that the convict should be taken to hospital.

He, however, said that the Lagos Prison has good medical facility to take care of prison inmates. 'We have medical professionals, whose duty is to ensure that all medical issues are promptly attended to. We are under the law and answerable to the law. The judgment said that she should be kept in that hospital. We had no choice but to obey. When she was convicted, the prison officials did their job while she was moved to the hospital immediately,' he said.

The prison PRO also said that now that Mrs. Ibru is on admission, the hospital has become an extension of the prison.

He said: 'The truth is that prison is an extension of the prison; over there our wardens are there to ensure that she is restricted within the confinement of the prison. There are also security men to ensure compliance and no one can have access to her except through us. The person is expected to apply and if she gives her consent, the visitor would be granted access. We hope that as soon as she recovers, she would be transferred female prison.'

Since the hospital is an extension of the prison, does it mean that the prison authorities would pick the bills?

Fatinikun explained that the Nigerian prison would not pay a dime since Mrs. Ibru was not admitted in the prison hospital.

How would the prison know when Mrs. Ibru is fit to leave the hospital? Fatinikun said that wardens and doctors are monitoring he progress.

'We have our prison warden in the room with her and our team of doctors do visit her to certify when she can be transferred to the female prison,' he said.

A prison warden, who pleaded anonymous, told Saturday Sun that the former bank chief's stay in hospital is bad news for the prison, as her presence within the confine of the prison could cause the improvement of the facilities.

She said: 'It would have been a good one at least for the female prisons. The male prison has received a lot of changes because of the category of inmates that were convicted. The female inmates were rejoicing when they heard that Ibru was convicted but all got sad when the news came that she might not see the four walls of the prison. It is really unfortunate.'

Ibru had pleaded guilty to three of 25 count charges of fraud and mismanagement. She was sentenced to six months imprisonment on each of the charge, which would run concurrently.

In sentencing her, Justice Abutu ordered that the former bank chief should forfeit property and assets valued at N199 billion.