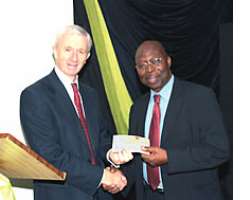 THE Nigerian Export Promotion Council (NEPC) has disclosed that Nigeria could generate about $200 million annually from the film industry, if properly harnessed.David Adulugba, Executive Director, NEPC, stated this at a press conference on the council proposed road show in Namibia, which is expected to export the Nigerian services in the movies and music industry.

He said the Nigerian movies industry was the second largest employer of labour in the country.

Quoting UNESCO report, he said the movies industry employed over 200,000 directly and over one million people indirectly, while the music industry, in recent times, had recorded unprecedented growth in terms of quality of production, acceptance within and outside the country.

Adulugba said the council, in its efforts to boost the export of Nigeria films and music in Africa, had concluded arrangement to showcase Nigerian actors and musician in Windoek, Namibia.

The executive director said the objective of the road show was to create an export path for Nigerian movies and music with a view to increasing the basket of exportable products from Nigeria.

Apart from this, the NEPC boss said the road show would also serve as a medium to open new markets for the export of Nollywood products - Nigerian music, arts, craft and fashion, as well as create an avenue for business contracts for the actors/actress.

He said, “the road show is primarily intended to promote our fast growing movies and entertainment industry. The programme will also promote and sensitise the industry by exposing the potentials of Nigerian artists whose services would generate foreign exchange earning.”

Over the years, Adulugba said that Nigerian movies had become very popular among the people of Africa, as well as Africans in the Diaspora.

He noted that the road show, with the theme: “Create Mission to Africa,” was being spearheaded by the council in its quest to develop and promote the entertainment industry as part of the five priority sectors for promotion under the trade in services sub-sector.

The road show, which will commence from October 17-19 this year, will be hosted by the Nigerian High Commission in Namibia, while the Chairman, Governing Board NEPC, Ali Jatau, will lead the delegation. Artistes who have confirmed their participation at the event are, Tuface, Patience Uzorukwu, Francis Duru, Uche Jumbo, Aki and PawPaw, Monalisa Chinda, among others.

One of the artiste billed to perform at the road show,Francis Duru, said the film and music industry had the potentials to grow the country's GDP rapidily if proper attention was focused on it.