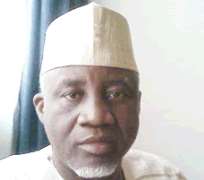 Dingyadi
The hue and cry over the Sokoto governorship litigation would be put to rest on November 26, 2010 when the Supreme Court is expected to pass its verdict on the four-year legal dispute.

But hearing in the matter took a new twist on Thursday when the appellants, the Democratic Peoples Party (DPP) and its governorship candidate, Maigari Dingyadi, had through their counsel, Lateef Fagbemi (SAN), moved a notice for the withdrawal of the appeal.

The respondents, who considered the move by the DPP governorship candidate as a booby trap to the interest of their clients, rather asked the apex court for a consequential order dismissing the appeal pending before the Sokoto division of the Court of Appeal, should the withdrawal be granted by the court. Fagbemi had while moving the notice seeking the withdrawal of the appeal informed the court that 'the appellants have unilaterally said they are no longer pursuing this matter and hereby withdraw the appeal against all the respondents. I therefore, urged the court to dismiss the appeal.'

He said the notice was brought under Order 8 Rules 6 [1] [4] of the Rules of the Supreme Court.

But in opposing the notice, counsel to the respondents argued that under Order 8 Rules 6 [4] Rules of the court under which the application was rooted, the appellants cannot unilaterally withdraw the appeal without their consent. Yahaya Mahmud, who was the first to oppose the withdrawal, said that there were still outstanding matters between the parties therefore, the appellants should not be allowed to go and re-litigate the issue based on the principles that ' there must be an end to litigation.'

He urged the court presided by Justice Christopher Chukwuma-Eneh to refuse the application as an abuse of court process.

Olanikpekun, who is counsel to Wamakko, in opposing the application, described it as vexatious, and abusive in nature joined Mahmud in asking the apex court to refuse the application and proceed with the appeal. The ex-president of the Nigerian Bar Association [NBA] told the seven-man panel that the application was brought to circumvent the cause of justice and to bring the judiciary into disrepute. According to him, 'the court has a duty to protect itself by making a consequential order dismissing the appeal before the Sokoto Court of Appeal otherwise, there will be anarchy in the judiciary.'

Izinyon re-echoed the submissions of his colleagues and urged the court to refuse the application as abusive and provocative. Responding to the submissions made by counsel to the respondents, Fagbemi, who argued on the nitty gritty of the case, insisted that his application was properly brought under Order 8 Rule 6 [1] of the Rules of the court, which allow his clients to unilaterally withdraw the appeal without recourse to the consent of the respondents.

While citing cases to support his submissions including Ndigwe V Nwude and Edozien V Edozien, Fagbemi maintained that his application was proper before the court.esides, he urged the court to discountenance the submissions of the respondents to the effect that dismissing the appeal before the Court of Appeal, Sokoto 'would amount to assuming jurisdiction on the matter that originally belongs to the appellate court.

It was after the submissions that Justice Chukwuma-Eneh adjourned the matter to November 26, for judgment. The appellant had approached the Supreme Court following a dispute that arose over whether or not he could withdraw the interlocutory appeal which resulted from the refusal of the Appeal Court to allow him amend his prayers in the substantive appeal.

On March 10 this year, a panel of the Supreme Court Justices headed by Justice Niki Tobi upheld the appellant's application to withdraw the said interlocutory only for the court to change its mind and requested parties to come and argue the validity or otherwise of the withdrawal.

The legal battle commenced after the PDP and its governorship candidate were declared as winners of the April 2007 election. It was shortly after this that the DPP candidate in the said elections, Dingyadi and his party went to court challenging the qualification of Governor Wamakko and his Deputy on grounds of double nomination and lack of a valid running mate.

His appeal was, however, dismissed at the election tribunal presided over by Justice Mudashiru Oniyangi for lacking in merit. On appeal at the Election Appeal Tribunal in Kaduna, which ruled that Wammakko and his Deputy were not qualified to have contested the election on the grounds of lacking the valid nomination. Justice Zainab Bulkachuwa further reaffirmed this decision that Wammakko and his Deputy, Shagari, did not meet the requirements of the Electoral Act and the 1999 Constitution.

It was the ruling of the tribunal that the issue of double nomination touches on the qualification of a candidate to contest election and that Wammakko's nomination violated section 187 [1] of the constitution. The Appeal Tribunal after nullifying the election, ordered for a re-run among the parties and candidates that participated in the April elections, but failed to disqualify both PDP and Wamakko from participating in the re-run.