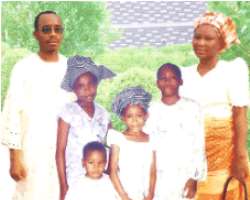 Uche and family
Any person who is conversant with goings on in Aba does not have to stretch his imagination far to have an idea of what life could be like in Thomas Hobbes' State of Nature. In Aba, life is very nasty, very brutish and short and of little value.

The story of kidnapping, rape, robbery and killing comes out of Aba everyday. But that of Dr. Stanley Uche, some three weeks back was one case of kidnapping and murder too many, defying everything previously known about the operations of the outlaws that have since become the de facto lords of Aba, shameful reality that the police in Abia state have sadly come to terms with.

Uche, a renowned gynaecology and proprietor of Victory Christian Hospital at Obohia Road, Aba was abducted along with his wife in the presence of their children on September 16. His body was later dumped at Aru-Ngwa in the Osisioma Local Government Area of Abia state after his captors had given assurances that they would not put him in harm's way provided their conditions were met.

Now the bereaved family thinks there is more to Uche's kidnap and subsequent murder than meets the eyes, and his distressed wife, Miriam, is yet to understand what could have motivated the action of kidnappers.

Mrs. Uche who has since fled Aba, is still at a loss as to why the bandits killed her husband within 24 hours of taking them captive, despite that the ransom they demanded was promptly paid within hours. 'It's not as if I did not give them (the ransom). We agreed on an amount which I gave them. They said I should bring it and I did; that was it. I did not know what really came over them, I really don't know,' she told Daily Sun last week.

Like the pastor of the slain doctor, Pastor Theo Maduafor, she is befuddled the more by the decision of the police at Osisioma not to inform the family that Uche's corpse had been found until 24 hours later despite that the police were very familiar with the case which was duly reported to them.

The story of the late Dr. Stanley Uche is a pathetic one. Ironically, it was death that had necessitated the travel being made by the Uches when they were accosted by the kidnappers. A member of the family, in fact a cousin of the doctor, was due for burial that weekend in their village in Mbano, Imo state, and the deceased had set out for the burial with his wife, their two children and his younger sister.

The wife recalls that they were already on the expressway that runs from Enugu through Aba to Port Harcourt when she noticed a Mercedes 190 vehicle behind the Toyota Camry car in which her family was traveling. Whether it was by sheer instinct or premonition, she knew the movement of the vehicle was not a friendly one, and had promptly told her husband who was driving to be wary of the car. According to her, Uche had taken notice of her warning while the journey continued.

However, their determination to lose the vehicle on their trail came to a naught pretty too soon, thanks to the potholes that made nonsense of the portion on the road as they were approaching a place called Aru-Ngwa. It was then that they were overtaken and blocked by the Mercedes Benz car. About four-gun totting men were said to have jumped out immediately and bundled the man and his wife into the boot of their car and sped away as other people watched, leaving the shocked children and the other girl, a university undergraduate, in utter confusion.

The couple was carried to an unknown destination where they remained in the boot till the following day. According to Mrs. Uche, her husband was chained with a key right inside the boot, for reasons best known to their captors. There was little or no air coming inside the boot where they were dumped, except while the car was in motion.

The doctor himself was not in the best state of health. In fact he had been sick the previous day, but had to opt for the journey because of the issue involved. Meanwhile, at the spot where the kidnapping took place, a man who witnessed the drama had alerted the police which came to the scene and drove the stranded children and the sister of the deceased to their home.

Before then, Uche's sister had phoned the doctor's elder brother who had travelled ahead of them to the village for the burial and told him his brother and sister-in-law had been abducted. The case was reported to the police at Osisioma.

The police were said to have demanded for N5,000 so that they could radio the Abia Police Command at Umuahia and also open a file for the case. The family was said to have objected to the idea of opening a file since it could aggravate matters for the victims, but the police had insisted, and the N5,000 was paid.

Meanwhile, the kidnapped persons were still with their captors until early morning of the following day when the wife was released.

They had promptly demanded for N10 million as their price before Dr. Uche could be freed. According to Mrs. Uche, they said they were releasing her so that she could go and rally money to secure her husband's freedom. Mrs. Uche, who says she escaped being molested by some divine intervention, explains that as early as 6.00am that Friday morning, they had brought her out of the boot and told her to go home with assurances that her husband would be let go as soon as she returned with the agreed ransom.

As soon as she returned, she went about sourcing for the money, and thanks to her boss, she was able to raise the amount agreed between them and the kidnapper and set out to drop the money in the place designated by the hoodlums. Before 12 noon that Friday, the task of dropping the money was done, and the family was looking forward for the return of the kidnapped doctor.

'We agreed on an amount and they said I should get the money, and I did. They said nobody should follow me; I obeyed the instruction because I did not want them to harm my husband,' she says. Having received the agreed sum, the kidnappers told Mrs. Uche to go home, promising that the man would return before the day ran out. The promise not only raised the hope in the family, but also frustration as Friday passed, and the man was no where to be seen. On Saturday, the painful waiting continued and by Sunday, hope was beginning to turn to despair.

It was that Sunday afternoon that some policemen from the Osisioma Police Station came to the family and said Uche's corpse had been found in Aru-Ngwa the previous day and had been taken to the mortuary.

'The police could not alert the family or take the picture of the place where they found him. I don't want to go into many questions, but it was on a Saturday that they found him.

It was the same station that rescued the children and the vehicle. They found the phone number and everything on him, but did not contact the family until Sunday afternoon,' Mrs. Uche says. It was not the first time the Uche family was having a brush with kidnappers. Last year his father was kidnapped in their country home at Mbano. He was later released. On January 1, this year, he lost his mother, and the father who was yet to fully come to terms with the death of the wife was recuperating in his son's house in Aba when the incident occurred. He is yet to be informed that Uche is dead.

In Aba where he had a thriving medical practice, the 47 year old graduate of the University of Ibadan was known as the people's doctor. It was not surprising that a pregnant woman who was attending antenatal in the hospital collapsed and died on the spot when she had of the death.

Pastor Maduafor believes that some envious people who were not comfortable with the popularity enjoyed by his hospital may have had a hidden under the guise of kidnappers to get him out of the way.

Describing the deceased as a very humble, quiet person, he says: 'He was taking little money from people and God was helping him. They had been planning against him. They went through Bakassi sometime, that time it was a woman who claimed to have been delivered of her baby in the hospital and the baby was killed. They were ready to kill him until they found out it was all a lie. He was ready to help people, humble, very quiet.'

Insisting that kidnapping was only a smokescreen used to perpetrate the evil intention of those who felt threatened by Uche's thriving practice, the pastor says: 'I feel it was envious people who came in the guise of kidnapping him. His antenatal that used to be twice a week is now four times. He recently moved to a four storey building, and the whole place is filled. It was not money the people were looking for. How can they say they are looking for money, and just a question of one day, the man had been killed?'

Lamenting that Aba had suddenly become a jungle in firm grips of the vicious black-hearted men, he says another doctor also died the previous day, another victim of kidnappers. The doctor fell down from his house while trying to escape kidnappers who were closing in on him and later died.

'For now what is happening in Aba is painful. They are destroying everything and everybody in Aba. They rape people, kill people for whatever reason…The banks are closed, churches are closed, markets are closed, and schools are closed. People are hiding up and down,' the pastor lamented.