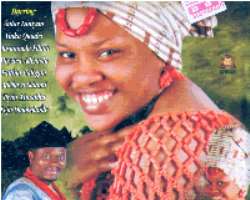 Iku Ewa
What would you do for beauty? Or what wouldn't you do for outstanding beauty? Those are the questions that should cross your mind after seeing Iku Ewa.

Iku Ewa is the story of Ogundele (Yinka Quadry) and his family. The opening scene shows his sister disgraced in a beauty competition . The made her commit suicide and left Ogundele, a teenager , on his own.

Subsequent scenes show Ogundele as a married man, with an extremely beautiful daughter, Ewatomi, (Mosun Filani, the producer of the movie). Ewa as Ewatomi is fondly called is the cynosure of all eyes. All men in the community wanted her hand in marriage , but she had her eyes firmly set on a particular prince, Adeyanju (Muyiwa Ademola) , who also had his eyes fixed on Adedoyin (Faithia Balogun). The intrigues and power play that followed led to the death of the three. Ewatomi's father was stoned to death.

It ranks as one of the most engaging and deep Yoruba movies in recent time. The language is laced with heavy proverbs and makes it distinctive. The dialogues and screenplay are superb.

The characterisation in Iku Ewa is apt except for Fathia Balogun who looked a bit off and that is so unlike her. She seemed to be in a rush to deliver her lines and move to the next scene. Her dance steps are so artificial to the extent that one would think she's a 7up cartoon character fido-dido. Oga Bello, Antar Laniyan, Yinka Quadry and the chiefs all fit their roles.

The storyline is above average and strong enough to sustain attention till the end. The only issue with the storyline is the wacky twist that tended to depict that Ewa had an identical twin . Though producers of the movie wanted to create suspense, it seemed they were looking for a way to make the story stick together.

One uninteresting aspect of the movie is its poor sound effects. Iku Ewa goes a long way to show that most Yoruba movies still have problems with technical aspects of film making. The sound is lopsided and not crisp .

The picture quality is above average but not sharp enough to put the movie in the class of Toluwa nile, Oleku and the likes.

The setting is apt but cinematography is poor.
With Iku Ewa , Mosun has proved again that one can only get better with time. She is fast becoming one of the most important producers to look-out for.