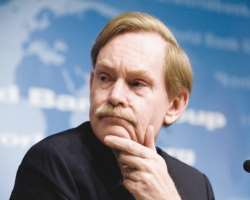 
It is Déjà vu or here we go again. International Monetary Fund and World Bank, the big brothers advice to African countries is always on the best way to financial Independence which is like a wild cats watching out in the interest of the whole animal kingdom. Their interest, they claim, is to make African countries prosper, so that we can buy more from the members of Paris Club. But Ghana is sourcing loans from China and Japan, not them.

One would think that since Africans have been stung so many times, we would have learnt our lessons by now. These warnings have been made by warriors forced into war before slave trade, by Nkrumah they labeled a dictator before political independence, by Awolowo we called doomsayer before structural adjustment and we continue to fall for our worst hedonistic tendencies. Africa’s development will never come from outside but from within according to our intellects, brows, culture, fair trade and our inventions. If we do not want to reinvent sliced bread, we can steal their inventions as others did.

Ghana is the beautiful bride of Africa these days because of large commercial discovery of oil and some loan sharks cannot wait to lend money at rates that are too favorable to ignore irrespective of our ability to pay back. After all countries do not disappear, it will only take longer to pay back. That is, from one generation to another while interest and penalties increases. It is like the farm workers that never own the farm or ever make enough wages from working on that farm to gain freedom. Just ask Nigerians about oil.

They are so concerned about Ghana asking or taking loan from China that they have to let us know that taking loans may be disastrous except if it is coming from approved source recommended by well educated and suave economists like the World Bank. After the IMF alarm, China loan of $9 billion guaranteed with mineral resources of Democratic Republic of Congo had to be trimmed to $6 billion. A World Bank family that admitted they gave third world countries devastating advice on trade and structural adjustment.

None of their African senior directors exposed any detrimental effect of their advice to African countries until their bosses were ready to apologize for their "mistakes". They have never offered any advice on how to rectify or reverse the effect of their mistakes. Those African economists that have always been suspicious of their intentions asking the rich western countries for fair trade into their markets, not aids, were ignored.

The role of the African members is to make sure the international body they work for does not lose its capital and all the funds are recovered with enough interest, penalties and service fees to pay and maintain the organizations. It is only sensible that they do not operate at a loss. But the way these loans are sold to us is as if they are charitable bodies taking from the rich to give the poor. Once we understand the fundamentals, we may start seeing or understanding why world bodies like World Bank would discourage Ghana from taking loans from China, a competitor.

Foreign loans to Africa have been nothing short of disaster so far. They take more than they put in to cover their expenses, interest and penalties while Africans are left holding empty bags. But nobody gives out a loan for free either, the other part of the blame rest on the shoulders of those African countries that spend the loans on uncreative projects. Indeed most of the loans end up buying only their goods, services and kickbacks.

The easiest examples are the credit card loans which most people are familiar with. The World Bank and other international bodies will always present initial offering that are usually generous stressing these terms and conditions. Where ever the funds is sourced from, either from so called foreign aids donors or from capital markets; requires fees for handlers, banks and insurance that guarantee payments back. None of them are usually from the third world countries except some of the employees of the international body.

If Nigeria is an experience to learn from, the giant of Africa has been wounded. The Paris Club members made of members of World Bank and International Monetary Fund have demonstrated enough odious intricacies of their lending institutions. In most cases, it starts at very favorable rate and in other cases with almost zero percent interest. That is what makes most of these loans so attractive to poor countries. It is the terms and duration of the loans that generate profit from naïve borrowers. Like any other loan in the market, if any of the terms and conditions are not satisfied, there would be penalties and higher rates including restructuring of the loans.

Asian countries like Japan and China are now flexing their economic muscles buying up American and European treasuries and corporate bonds on one hand and lending to African countries at even more favorable terms than the old lenders. So there are bound to be some competition between the old lenders and the new lenders in the African market. They all want something back for their money from a Continent full of natural resources. They want concession on cheap raw materials, not the finished products.

Their intention has always been to look out for themselves, which we cannot blame them for, but to claim that they were looking out for us is deceptive, and they know it. When they told Ghana to privatize its major industries and sung Ghana’s praises for going along, many Ghanaians economists sounded their warnings and continue to do so. Ghana, like most African countries needed to go along with the hope that the promises of economic cooperation that would lead to fair trade would be honored.

Unfortunately, only a part of the deal that could be accomplished from our end is fulfilled while the part on their end is always subjected to approval of different bodies, rules, regulations and laws that are cumbersome. In the end, if the deal were generous or of beneficial to us, individual companies could lobby against it and kill it while we hold on to the deal on our end. They call it the rule of law that may be lacking on our own end. African economists call it deceptive acts worthy of only unholy practices.