Night of Thousand Laughs made me popular, left me poor--MC Basketmouth 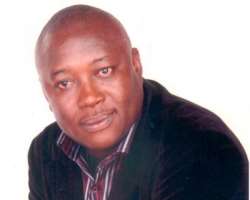 He shares a similar stage name with another popular comedian but Ernest Essien, aka MC Basketmouth, is synonymous with musical comedy due to his unique style of jokes presentation. The popularity of the mercurial comedian, who was discovered at Opa Willaims' Night of a Thousand Laughs, continues to soar in the face of serious competition. He has succeeded in building a brand with his stage name, MC Basketmouth. In this exclusive interview with Obaro Itewo , he explained the reason behind his change of name, which became necessary when a fellow comedian began using it. The Nkpat, Akwa Ibom State-born comedian is well-known for his popular song, Nigerian Girls. The ex-military man talked about his foray into comedy and the challenges associated with the profession.

I am Ernest Essien. I am from Akwa Ibom State. I was born in Port-Harcourt and I grew up in Jos. Now, I reside in Lagos. I am married to an Igbo woman. I am a professional entertainer: a musician, comedian and actor. I am also an MC. I'm into events co-ordination, planning and management as well as entertainment consultancy.

How did you come about the name MC Basketmouth?

MC Basketmouth is a recent brand. Originally, it was simply Basketmouth. When my younger brother, Bright Okpocha came into the picture, he was also using Basketmouth. So, in order to avoid confusion and conflict, I changed mine to MC Basketmouth.

Did Bright Okpocha come on the scene before you?

I started a very long time ago, 1996. Basketmouth became a brand fully around 1998. Bright came onto the scene in 2000. He approached me at Ali Baba Show and said he didn't know I was using Basketmouth. I told him to keep the name, let me modify my own to differentiate us and that was how I added the M.C and came up with M.C Basketmouth. As at then, the name was already a brand. A lot of people blamed me. Some said it was a case of Jacob and Essau, that I sold my birthright. I did this, I did that, but today, I am very, very proud that I did it.

Did Bright Okpocha take advantage of the well established brand name for easy and quick rise to popularity and fame?

He did not. He didn't even know about me and I didn't know about him. He was operating then in Benin, with the likes of I go Die and Gandoki. We were very few then: myself, Ali Baba, Okey Bakassi, Okey Julius, Sunny Baba, before Klink de Drunk came in. The pioneer of comedy is none other than Ali Baba, although we have people like John Chukwu and the late Mohammed Danjuma. We also have television comedians like Baba Sala, Papi Luwe, Jaguar and the rest of them. But for stand-up comedy, Ali Baba is the person that spearheaded it all because nobody used to see comedy as something really serious. The general belief then was that comedians are jokers, people who are never serious in life. So Ali Baba is the person that really spearheaded its success.

I went to school like every other person. I attended St. Michael Primary School in Jos. After that I went back to my village because my father wanted us to have a feel of where we come from. So I attended primary school at Nkpat Enin Local Government Area of Akwa Ibom State and later, Command Secondary School, Jos, where I had my secondary education. After that I lost my old dad before I later proceeded to the university of the streets where I had my Ph.D.

Can you recall how your exploits in comedy started?

Comedy is not just something you sit down and plan to do. Once the talent is innate in you, it's finished. I grew up in the barracks, and that in itself is a comical environment. The barracks is a house of comedy. There you meet different kinds of people from different tribes with different characters. Comedy is something that is actually in-born in me. I grew up with it. Schools usually have groups that are into “yabbing.” So we just sit down one on one and face each other yabbing and throwing jokes. I grew up in the barracks. My father was a military man.

He must have been very strict?

He was a caring and loving father. It's not all soldiers that are disciplinarians. He was a little bit strict, but he was a father that could say, I am sorry.

So how did your come into comedy?

I was a musician right from my school days. I was singing in the school band. My father was a choirmaster. My mother was into singing, so I grew up in a family were almost everybody was into music. I remember then in the late 80's and early 90's, before my father died, every Christmas, we used to sing in our church. We used to be five in my family. But I lost my immediate younger sister in 2005. I am the first-born. One of my sisters is now late. I have a sister and two brothers.

Why did you ditch music for comedy?

I still sing. My primary constituency was not comedy. That was why I was able to create music comedy like when I sang, Nigeria Girls. When Basketmouth came into the industry, I needed to create a distinction between Basketmouth and MC Backetmouth because it was really confusing. When I went to some places and said my name was Basketmouth, the reactions were like, “Ah! Which Basketmouth is this?” It became an issue.

You guys must have made a lot of money then?

As time went, we got paid N40, N50 and N100. The day I got paid N100, it was celebration time. It was big money then. And we were just playing music for the fun of it. We weren't playing for money, though the money came later. My joy was to make people happy and make them laugh. I believe whatever gift God gave you is for a purpose.

How did you come about the name 'Basketmouth'?

Around 1998, 1999 we used to play at a place called 'Frank' in Apapa. At times, I threw in jokes to make people laugh. It was a kind of musical comedy. So somebody in the crowd said, 'Ah! See this guy, your mouth dey run like Abami Eda, you be Basketmouth?' That was how the name Basketmouth came about.

Besides having comedy talent, something must have influenced you into comedy.

I met my wife in 1998. Before then, I used to do comedy for fun. She now said, 'Why are you dong it for free? People are making money from it. Okey Bakassi was more of an actor, but he was doing comedy. Why am I wasting the talent? You are just playing music and not doing anything about it?' I told her not to worry, that I will do something about it. She later introduced me to Dede Mabiaku. I also played in the Coliseum.

Were you playing in the Coliseum with your own band?

There was the Coliseum Band. I played for them. I was in the Coliseum for three years. All those times were like growing up time for me. During this period, I was also doing comedy. I used to do MC at events and all that before Opa Williams brought me to a Night of a Thousand Laughs.

And that gave you your first break?

No. My first break was in Nigerian Breweries. I went to perform at Kingsway and we used to yab ourselves in those days when we travelled with Dede. We would crack jokes. Dede is also a comedian, but most people don't know this. One day, Dede called me and said why was I hiding? Ali Baba was there, Mandy was there. From that point, I became serious. From there, I went to perform for Nigerian Breweries and Coca Cola when it brought the Magic System. I performed with them in Benin, Port-Harcourt and Lagos.

So how did you meet Opa Williams for the Night of a Thousand Laughs comedy show?

I got into the show through a friend, Yinka, who is now the Project Manager of the show. Night of a Thousand Laughs brought me out and shot me into the limelight, though I didn't make any money from it.

You were not paid?

We were just paid to come on stage. When you market a show as big as that, after making millions of naira selling CDs, we should have been compensated. Though it made us popular, he didn't compensate us and since nobody seems bothered about it, I let him go.

Why are you raising the issue now?

As at that time, the popularity was more important than the cash. But looking back now, we felt we should have been compensated. Back then, we were enjoying the ride.

What motivated you into comedy?

Ali Baba motivated me. In everything you do, there must be something that will propel you. I was more comfortable as a musician. I was making my cool money playing music until my wife encouraged me to do comedy in addition to playing music. So, after the Legend Show and subsequent shows, I took off from there and I started stand-up comedy. I write my own jokes and sometimes I listen to other people's jokes.

In other words, you were once into jokes piracy.

Look, people are saying that in comedy, they are doing copyright. Let any comedian come out and tell me that from the beginning of a show to the end, he didn't get inspiration from other people's jokes or he has never used other comedians' jokes. Let's be realistic. I can use Gandoki's jokes and present it in another way if I see another funny thing in that joke. It is not copyright. If somebody doesn't copy you, then what you are doing is not good.

Your wife must have had so much belief in you by encouraging you all the way. How did you meet her?

I met my wife around in 1998. We courted for about a year and some months before we got married. She is one of my greatest critics. Any event that I go, and she is there, she inspires me to do well.

Was she one of your numerous female fans when you were still playing around?

We met at a show. We didn't even talked until we met about three months later, and we started going out.

What did you see in her that made vowed to live the rest of your life with her?

When I saw her, I knew right away that I've seen my wife. I don't know what happened but, I think the Holy Spirit simply told me that she is my wife.

Before meeting her, you must have had some couple of girlfriends.

Yes of course. I was a young man. I was not planning to get married. I wasn't thinking of marriage. I have a few things I wanted to do with my life, so when I saw her, the whole perspective changed.