My husband edits my scripts before I accept roles – Thelma Okoduwa 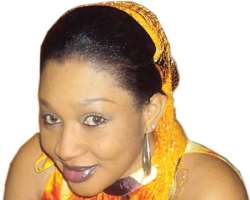 She's not a green horn in the movie industry, having featured in several movies including “Desperate Billionaire” where she played the good wife to Kanayo .O. Kanayo and “Fast Moves” which is her debut movie amongst others.

She was also in the Chico Ejiro's popular soap, “Treasures”. Thelma Okoduwa is an Edo State born actress who studied Computer Science at the University of Port Harcourt.

A notable friend of Rita Dominic, Thelma in this encounter, recounts her passion, longing and her accomplishments. She also reveals how her husband insists on vetting any script given to her to ensure she does not accept any role that has to do with kissing on set amongst other issues.

Let's talk about your growing up?

Growing up was fun for me. I'm from Uromi Ishan in Edo State. My upbringing was punctuated by a kind of strictness where you have to obey all the rules despite the fact that my parents are no more.

I didn't face so much challenges as a growing child because my movement was restricted. More so, I was a very shy person though I've out grown that now. I don't want to say that the restriction was a challenge for me because I've always been an introvert .So I was fine with the style.

I got into the acting about six years ago. My first appearance was in Chico Ejiro's movie but for sometimes now, I've been featuring in soaps. I featured in soaps like 'Beautiful Liars”, “Treasures”, “Family Ties', 'Spider”, 'Tinsel' produced by M-net, and a couple of other soaps I can't really remember now.

Did your parents welcome your decision to go into acting?

My parents while they lived were very liberal people. They were not opposed to our choice in terms of pursuing a decent career in life.

Which movies actually brought you to limelight?

How much of the goodies that come with fame have you tasted?

Acting actually comes with a lot of goodies. Apart from receiving preferential treatment at various places, we get gifts and favours from total strangers too.

Sometimes it can be very embarrassing as well it's fun. I believe that is one way people appreciate us especially when we do our jobs very well and it's awesome.

Have you featured in any Edo epic movie?

So how has it been all this while?

It's been fun because I love what I'm doing. Acting involves a lot of concentration but at the same time it's fun.

Did you have any background in Theatre Arts?

I did a certificate course in Theatre Arts (CTA) from the University of Port Harcourt. Later I switched over to acquire a degree in computer science.

Did you study the course because you wanted to act?

No, I never thought I would become an actress some day, but I just loved to demonstrate anything I watched on screen. Till I graduated from school, I didn't know I would go into acting. I guess circumstances led me into it.

Do you have the intention of going into the ICT sector?

Apart from being a mother and a wife, I also do other things. I deal in interior decoration, I actually sell them myself. So I'll either go back to ICT or continue my business.

In your recent soap, “Spider”, you're supposed to be the daughter of one family that lacked so many things, but both you and your sister appeared very flashy. Don't you consider that a flop?

No, our look doesn't have anything to do with it. After all looking good is a gift from God. The most important thing is that we're able to interpret our roles very well and I believe we're doing our best. I know what is expected of me as Ngozi just as my sister is aware of what is expected of her as Nkem.

You said you're a mother already?

Yes, I had my baby seven months ago so I'm a proud mother of one child.
How did you meet your husband?

I actually met my husband in the course of my job when I went to Abuja to do a stage performance. He didn't come to watch the show because he's not a Nollywood fan so he didn't know me at all. But somehow I ran into him through a friend.

Have you been able to turn him into a Nollywood fan?

Of course, he doesn't have a choice.

So how does he feels whenever he watches some of the romantic roles you play in movies?

He has a problem with that but at least he believes in me. Before we got married, he used to insist on going through the script before I accept any role to ensure I won't be kissing anybody.

But right now he's fine with it. It's not as if he's giving me the free hands to do all that but there's a limit to which I can go.

Is it because your husband is jealous that you hardly wear clothes that expose your body?

Most times you'll find me in my jeans because I'm most comfortable in them anytime, any day.

They're comfortable and smart. My husband does not really have a problem with what I wear though I'm not the type who goes overboard in my dressing. I wear clothes that accentuate my figure and I know the difference between looking sexy and decent.

Do you still get advances from men since some of them may not know you're married?

Of course, I still get advances from men. It's true that they may not know I'm married but it happens so often that it just cracks me up.