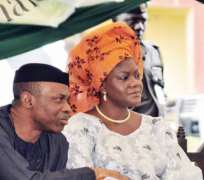 The wife of the Ondo State governor, Olukemi Mimiko, has lamented the increasing number of obscene movies by Nigerian producers.

Mrs. Mimiko spoke yesterday at the 4th Festival of Indigenous African Language Films, held at Owena International Motel, Akure. She said most of the movies were gradually eroding the rich cultural values of Nigeria, most especially the Yoruba culture, which lays much emphasis on moderate dressing.

She said though the Nigerian film industry, otherwise known as Nollywood, is competing favourably with others elsewhere, obscene scenes are gradually eroding the qualitative works of the industry. She, therefore, called on the agency saddled with the content to put in place a strict procedure that would sanction producers who shoot obscene films.

“Obscene movies distort the minds of the youth, erode the self worth of women, and increase the level of sexual crimes in our society,” Mrs. Mimiko said.

She, however, expressed optimism that Nigerian movies could compete favourably with the best movies globally, if well managed.

The coordinator of the programme, Biodun Ibitola, who is also the managing director of Remdel Arts and Film Academy, said the festival was intended to showcase Ondo State, with a view to encouraging festival visitors and producers to create a film-friendly community in the state.

She said the festival will equally explore opportunities that abound in the state for the growth of a local film industry, as a way of encouraging job creation, tourism, and promotion of the local culture.

“The theme of the festival, 'Films, Politics, and the Society', was carefully chosen to make the festival socially relevant to events taking place in the country, and to encourage film makers to shoot films that would contribute to enthroning a new political culture,” Mrs. Ibitola said.