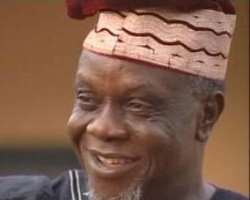 Justus Esiri nowadays does directing, but he was a vibrant and resourceful actor in those days of yore. He featured prominently in the popular sit-com of the 80s, Village Headmaster. He doesn't regret being a pioneer or the sacrifices that come with it such as poor remuneration. But Esiri is not a poor man.

He's quite comfortable with his six children who are all university graduates. Esiri who acknowledges that acting is more lucrative now than before believes that actors of today should be doing more since what they do transcend the shores of Nigeria.

He scores today's storylines low compared to what obtained in Village Headmaster and Cock Crow at Dawn for instance or better still their foreign competitors. He feels bad that Village Headmaster has been discontinued and he suggests how to revive and sustain it in this interview with Samuel Olatunji . Excerpts:

In your opinion, who are the people doing well in the movie industry that you know?
There is a difference between making money, trying to make money, and having a job, which some actors do now and they are paid for . They want to be exposed and they want to be recognized. They actually do what drama is all about.

Don't you want to assess present day actors?
No, I don't know them.

What things are they doing that they can do better?
They don't know why they are doing what they are doing. They don't do it to interpret the character.
But they say , if you can't see their mind you can't really tell, if they do it for the money. Well, you see, we directors play a major role in what comes out on Television and in most cases, the stories I have had are not detailed enough. There is so much to making sure that the acting job does not become corrupted. I know now that a lot of actors and actresses want to be role models, but it's not done yet.

What about present day stories; are they good enough?
(Chuckles) The stories are watery compared to what we did. The problems of this country are so numerous, but the directors must bring out the scriptural message for them to be solved. The director is the one who sees the problem while he's directing, realizes the problem and solves the problem. This means that, if there is a lot of problem, the director must be psychologically attuned to his environment to solve the problem for the audience to watch and for them to have their opinionss about it.

Present crop of actors say they make more money than your generation did. Is this true?
Yes, they are making more money. There's more money now than we had in our generation. You have to pay actors to work, but are you getting the value for your money? Are they delivering what you want? Village Head Master was not like that. If you saw actors trying to get into Village Head Master you will know that you have to work extremely hard to get into the soap opera.

Has the Nigerian movie industry improved or declined in the last 50 years?
Well, I want to say that it is growing. It has moved from stage play to Television drama. Now, we have to work on ourselves content-wise. We need good content.

Will you produce a soap opera?
I have a television series I want to produce.

As an actor, in the last 50 years, are you fulfilled?
I am always fulfilled. The older you get , the more you realize those things you could have done better. Yes, I am fulfilled, I have done a lot of things in my life. I've trained my children and they are all doing well. I am happy with them, I have a son who is a dentist and into music, I'm fulfilled.

Do you sometimes wish you were not just making a name but also making money?
Yes, but you see in our time as actors, we wanted to entertain people, but it wasn't as lucrative as we wanted. I'm happy that nowadays actors make more money than we did in our time. The little that we made in our time we made the best use of. Today, it is quiet different. People are going out for the money . There is more that we can do to the benefit of this country.

The good actor who understands what he is doing, knows the things that we did transcends the borders of this nation. Now we should bring better things for people to learn from , and to entertain people outside the shores of this nation . Younger people are making more money, because they are not pioneers. Above all, I am fulfilled.

Are you a millionaire?
(Laughs) I don't want to answer that, lest I will be kidnapped.

Sir, sincerely, are you concerned about the spate of kidnappings in the country and the tendency that actors are also targets?
That's the effect of poverty. Kidnappers believe actors make a lot money, so they are the people to be kidnapped , to be put in the dungeons and other people pay ransoms for their release. It's poverty and this country doesn't have to be poor. This country has enough to take care of everybody. The way I see it, if there are jobs it won't happen. That is not our style. It's alien to Nigerian .

At 50, should Nigeria celebrate or should we cry?
The billions earmarked for celebration should be used to build hospitals, educate the masses, care for the handicapped , provide potable water and other amenities .What are we celebrating? We are doing nothing for the masses. We should spend money on things that will benefit us instead of celebrating nothing. That we have survived till now is cause to thank God. We should go to the church or mosque to thank God. We shouldn't be getting drunk.

Why haven't we seen you at the AMAA awards ?
I have received an AMAA award. I was given a best actor award and I am impressed. Besides, I'm an Officer of The Federal Republic (OFR). I'm fulfilled.

Your son is a musician, does entertainment run in the family?
No, my son is first a dental surgeon. He decided he was going to sing, because many dentists are not well taken care of. He is a fantastic musician though. I am very happy that he is doing what he loves to do and that he is not doing badly at it.

How many kids do you have sir?
I have six and they are all graduates.