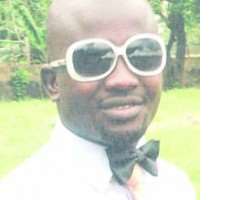 He is funny. His jokes can send you to an early grave if precautionary measures are not taken. He has defined his jokes as Christian, unlike the practice among most comedians. Virgin Boy, whose real name is Aghogho Tobore, grew up in the streets of Warri, Delta State, where he started his act. But today, he is one of the most sought-after comedians.
T
he comedian who was recently adopted by the Ondo State Governor, Olusegun Mimiko, opened up to NFC about his background, style and dreams.
Excerpts:

How did you come into comedy?
My name is Aghogho Tobore. I went to school at the Petroleum Training Institute, PTI, Effurun, Warri, Delta State. I once worked with an oil servicing firm at Forcados Terminal, but I had to abandon my job due to my love and passion for comedy. And I have always found it fulfilling, so I felt I should just follow my heart.

It's right to say besides your love for comedy, your monthly salary working at Forcado Terminal wasn't satisfactory hence your foray into comedy? How true is that?
No. We were paid N20,000 per week making it N80,000 per month. But in comedy, I can anchor a mere wedding programme and get paid nothing less than N100,000. There is a lot of money there. If I anchor five weddings in a month, that would amount to N500,000 besides other events for the month.

From your analysis, it seems the love for money principally brought you into comedy?
No, no, no, the love and the passion for comedy brought me in. I have the talent in me. I cannot hide it. I am a Warri boy. I am from Warri South Local Government Area of Delta State. There is a friend of mine, a brother to me, Onyebuchi, a Gospel comedian, who actually brought me into Gospel comedy.

In order words, Onyebuchi influenced your coming into the industry?
Yes. Before coming in, I had always looked up to comedians like I go Dye, Gandoki, and Ali Baba. But the person that really pushed me into Gospel comedy is Onyebuchi. You can do Gospel comedy at corporate events, marriage celebrations and in some other events and you will be highly appreciated.

When did you come to Lagos?
I relocated to Lagos February, 2009. That was when I won the Best Gospel Comedian in the Niger Delta Area. Since I came to Lagos, it has been fun all the way. My first performance took me to A.M Express. My elder brother in London was watching me on A.M Express live. I never knew it and he was encouraging me through calls and that very day NTA was holding its dinner party and the MD, a woman, invited me to perform. I performed before the Minister of Information and Communications, Mrs Dora Akunyili and other ministers present and it was really, really fun that day. The MD told me initially that they wouldn't pay me, but will only give me N5,000 transport fare. But after they saw my performance, they gave me N40,000. I was really excited. From there, I got another job from Starcomms when they organised a sendforth party for their secretary. The owner of Starcomms took me to his house and gave me N40,000.

But can you remember your first performance in Lagos?
Well, my first performance was in Redeemed Christian Church of God. I wasn't paid. They pointedly told me that they didn't have anything for me. I said “okay.” The person they paid was an Ibo Gospel artiste because the guy had always been with them. But for me, I was just performing for the first time to prove myself. So, after my performance, the pastor and the members were all impressed and the pastor gave me N20,000.

How will you describe your jokes?
I do Gospel jokes. I use my jokes to pass biblical messages. I always make sure my jokes have positive impact on people.

Besides comedy, what else do you do?
Comedy is a natural phenomenon. But for now, I am working on my presentation on Radio Nigeria. I am going into studio management and production next year. So that by the time I stop, I would have carved a niche for myself and left my footprints in the sands of time.

How did you get your parent's support?
My parents don't believe in my going into comedy. They believe I should continue with my job at Forcados Terminal. They have always wanted me to work in the refinery because it's situated in my local government area and as an indigene, I have every right to work there. Comedy is my life. It's in me. I don't know how to drop the idea of comedy. I don't just crack jokes. My jokes go along with a message.

Have you had any sad experience so far?
I have f**k up at many places. I went to AY Open Mic Show and I came out second. But you know, life it's all about falling down and getting up and not staying down. As a comedian, the first thing to do when you come on stage is to capture the crowd. You have to be creative and innovative. The inspiration must be there.

Any challenges so far?
I have a lot of challenges. I started badly, but today, I believe in the strength of God.

Was there any moment that altered your career?
Yes. That was last year when the Ondo State Governor, Olusegun Mimiko adopted me as a son and gave me an award with a certificate and I thank God for that favour and privilege.

How did you get to meet the governor?
Clarion Chukwurah took me there. We met a lot of actresses and actors with two comedians. Arrange Warri and Ogus Baba. it was on the occasion of the 17 years' marriage anniversary of the governor. When we got there, my performance was excellent. I just cracked jokes for him. After the ceremony, he gave me N500,000 and took me to his personal assistant who told me that in case I ever needed anything, I should meet him, they would be responsible for me.

Are you married?
No. I am still single and searching. Nowadays, when you go to church, you see a lot of girls. But you just have to be very careful with your choice.

Talking about your name, Virgin Boy, are you really a virgin or it's just a stage name?
Yes I am a virgin and I am keeping my virginity for my wife. You know, women can kill your career. I don't believe in women.

Where do you hope to see yourself in the next few years?
I hope to see myself as the best Gospel comedian in Africa and impact the Gospel message the more.

Do you see any fellow comedian as a threat to your career?
Yes. Comedians like Onyebuchi and Gordons are threats to me in Gospel comedy. But I believe I can escape from them by hard work. It's not possible to be in an environment without any challenges.

Do you intend to come up with a comedy show like your colleagues?
Oh, yes. I am expecting that by December. I am looking for a sponsor for it. But I am really looking unto the Ondo State governor to sponsor it because I know it will be fun and people will enjoy it. After my training, I am going to Ondo State to see the governor to discuss that. Money is the major problem. If corporate brands like MTN, Etisalat and others can come in, I think it will be really easier for us.