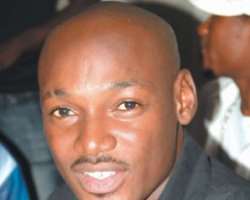 Chikelu Iloeyonsi, former Super Eagles defender, has sensationally revealed that life goes on long after his marriage hit the rocks.

It could be recalled that the former Nigeria '99 Flying Eagles' defender called it quits with his marriage with a Nollywood gal after both parties failed to reach a compromise.

Speaking to Iloeyonsi, who could not comprehend why this reporter cannot let sleeping dog lie, said matter-of-factly that he has moved on with his dear life.

"The chapter as long as I'm concerned is closed. I don't know why Journalists keep turning the hand of the clock back by asking me how far we have gone in the marriage issue," Iloeyonsi thundered.

The former Rangers International of Enugu player hinted further:"If I may tell you, the case is still in court. I have won the first round.m I am coping very well. It is not an issue. I don't talk about the past. The most important thing is that life goes on. I wish her the best of luck.''

The Enugu-State born footballer who has plied his football career in Turkey, Germany spoke passionately about the crisis bedevilling Nigerian football, submitting that the change of guard midstream in hiring coaches to tinker the senior national team, the Super Eagles is to say the least unwarranted.

Said he:“The Super Eagles would have done better but for the change of coach. I find it difficult to understand why a coach who qualified a team to the World Cup should be dropped few months to the fiesta.

"I knew they were not going to do anything. If you read my interview before the global tourney, I told everybody that by the Grace of God they would not perform. The 'egg heads' at the Glass House sacked Shaibu Amodu and brought in Lars Lagerback.

“If they were serious of developing Nigerian sport, they should have hired a coach that has good profile. You have to sign a coach who will work for at least four years. Then we see what he can do to tinker our team in a long term. How can you sign a coach and after the World Cup he goes again and you bring another person? Why can't you leave Amodu to finish his term?"

It is only in Nigeria that a player that is club less will make the national team. It is not done anywhere in the world. We need to have a standard home based Super Eagles that will be in camp before the foreign based ones come”.

Commenting on the employment saga between Samson Siasia and the NFF that is unending, Iloenusi said the football administrators were
literarily swimming in a pond of water, adding that it won't be long before they are flushed out.

''Siasia is not asking too much, if you ask me. I think he deserves it. Why are the FA reluctant to give him the amount that he is demanding? If you could give a foreigner so much why can't they give our own?

“The man deserves the job and so they are supposed to pay him well so that the players will respect him. As far as I'm concerned, Siasia is the best person now for this job because he has played at the highest level and has a good coaching credential capable of commanding the respect of the players”. Recent passing away of former Chairman Sports Writers Association of Nigeria (SWAN), Emeka Enechi, Iloeyonsi spoke glowingly about the amiable 'Biafra':

"My friends and I are pained, we are doing something to ensure his family does not suffer.We have something we are doing. We have opened an account to support his wife and kids.

Even at the burial, I slept at his place for five days."

"You know Enechi was my very good friend. I am close to the family. We are doing something to make the family very happy so that they will not miss him so much. We are also going to do something about taking care of the Children's school fees and accommodation. He was a great man. Biafra was a friend that whenever I remember him I shed tears because he had been there for me. That is why I called him my brother. May his soul rest in perfect peace'', Iloenusi said.