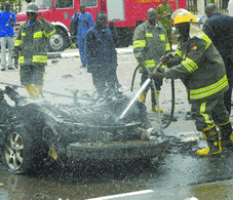 Wreekage of vehicles as a result of the explosion

Security within the Presidential Villa in Abuja has been beefed up following Friday's bomb blasts near the Eagle Square venue of celebrations marking Nigeria's 50th independence anniversary.

The explosions claimed no fewer than 15 lives, including State Security Service (SSS) and Economic and Financial Crimes Commission (EFCC) operatives. Scores were also critically injured and are receiving treatment at various hospitals in the federal capital city.

Consequently, President Goodluck Jonathan would this week be meeting with the country's security chiefs and state governors over the disturbing anniversary gift to the nation by the Movement for the Emancipation of the Niger Delta (MEND), which claimed responsibility for the blasts.

But, the group dismissed claims that it had become a willing tool in the hands of disgruntled Northern politicians trying to scuttle President Jonathan's bid to contest the 2011 presidency election.

Sunday Sun learnt yesterday that the Presidency quickly moved to tighten security in Aso Rock on Friday evening just as President Goodluck Jonathan gave marching orders to the security agencies to track down the perpetrators. A Presidency source informed that there was an 'unusual security movement' on Friday evening, which caused panic among workers in the Villa.

It was also learnt that movement within the fortress has been restricted as workers now have to obtain permit from the office of the National Security Adviser (NSA) before they can access the residential area.

Hitherto, staffers wearing the Villa's identity card were allowed access to the residential area, which has the President and Vice President's lodge.

MEND has, however, said the bombing was not politically-motivated as being insinuated in some quarters.

In an electronic mail response to Sunday Sun enquiry, the group's spokesperson, Jomo Gbomo, said the attack was not meant to embarrass Jonathan nor had political undertone.

Rather, it said it had to do with the issue of injustice in the Niger Delta that is 'being swept under the carpet.'

The South African connection
Sunday Sun investigation revealed that although the group was planning to strike, it had to fast-track it after Thursday's early morning raid on the Johannesburg home of its leader, Henry Okah, by a combined team of about 100 heavily armed South African soldiers and policemen. The security personnel had stormed Okah's home about 3am on Thursday, reportedly acting on a petition from the Nigerian government to the South African authorities that the MEND leader had a stockpile of explosives and other dangerous weapons in his home.

Although Gbomo said the attack had nothing to do with the raid on Okah's home 'because such a delicate operation requires careful planning to execute,' Sunday Sun learnt that the group was particularly angered by an alleged deception on the part of the Nigerian government.

It was gathered that on the eve of the raid on Okah's home, a presidential aide and former commissioner in Bayelsa State (name withheld) and a top official of the State Security Service (SSS) had phoned the MEND leader to assure him that the government was doing something about addressing the group's grievances.

The group was therefore shocked that a few hours later, South African soldiers and policemen led by a Colonel raided Okah's home in a Gestapo manner and held his wife and children hostage for about 10 hours.

The law enforcement officers, reportedly acting on a petition by the Nigerian government, were said to have stormed the residence with sniffer-dogs and heavy equipment used to destroy the main door leading to his living quarters and guesthouse while a helicopter hovered around the area. Okah, who confirmed the raid in a telephone interview on Friday evening, said he initially thought they were assassins because of the way they stormed his residence.

'We were sleeping when we heard a loud noise in the premises. The initial suspicion by my wife was that the attackers could be hired assassins. So I had to quickly bolt my bedroom door. 'But less than two minutes later, I heard a loud knock on the door and I bolted out of the room. Before my wife could even respond, they had broken into the room and for one hour they were searching for me in the house.

'They also broke into my children's room and held my 15-year-old and seven-year-old daughters at gunpoint. My daughter is still in a state of shock following the incident. 'My wife later informed me, because I left with a phone, that they were security personnel. I came out from where I was to meet them and wanted to know why they raided my home even without a warrant.

'The man, who led the operation, a Colonel, told me that they were acting on a petition by the Nigerian government that I had weapons in my home, which I was using to prosecute fresh violence in the Niger Delta.

'I told them that the Niger Delta crisis had to do with injustice, the type suffered by South Africans during the days of apartheid and that it had nothing to do with me. I also told them that the agitators were freedom fighters like South Africans and were risking their lives to end the injustice and economic strangulation being meted out to the region. At the end, they found nothing incriminating in my house but that was after ransacking and destroying my apartment,' Okah said.

He added that he knew nothing about the Abuja bombing as he was sleeping when he got a phone call from a correspondent of the British Broadcasting Corporation (BBC). 'I was taking a nap when a BBC reporter called to enquire about the Abuja blast. I have no knowledge of it. I do not live in Nigeria and the government should look inwards to solve its problem,' Okah said.

Gbomo also tried to defend Okah's purported role in the blast, saying: 'If Henry Okah's home was not raided on the eve of the attack, the government would have put the blame on him and even insinuated that he was spotted in Abuja like they did after the Warri attack.' The presidency is however said to be unhappy over the way the South African authorities handled the raid on his home, his purported arrest and release. A security source informed that the government would explore diplomatic channels to get the South African government to revoke Okah's residency.

In 2008, Okah was arrested in Angola by the Angolan authorities acting at the request of the Nigerian government. He was deported to Nigeria where he was held in solitary confinement for 18 months and secretly tried on a 62-count charge bordering on terrorism, illegal possession of weapons and treason among other capital crimes before a Federal High Court in Jos.

In July 2009, the government under the late President Umaru Yar'Adua filed a nolle prosequi and withdrew the charges against Okah before granting amnesty to several Niger Delta militants and groups.

Security lapses
It was further learnt that the incident could have been averted if the country's security agencies had taken the information on the bombing seriously. Sunday Sun gathered that the Nigerian government had been reportedly alerted by the British intelligence that an insurgent group was planning to strike on October 1.

According to a source close to one of the security agencies, the information was however treated with levity and that effort was concentrated on securing only the Eagle Square, where the President and other dignitaries were to be present.

Gbomo also claimed that the government was given enough warning on the bombing even as he expressed regrets that innocent lives were lost in the incident. 'The avoidable loss of (lives) is deeply regretted. The government was given ample time of five days and a further one hour before the first blast. Any responsible government would have evacuated the public and used the public address at the venue to calm people and follow the instructions to avoid milling near vehicles and trash bins,' Gbomo said.

Our national security porous - Ekiyor
In his reaction to the incident, immediate past president of the Ijaw Youth Council (IYC) and convener of the Nigeria Youth Integration Summit, Dr Chris Ekiyor, described the attack as 'barbaric, on a day Nigerians were celebrating their nationhood.' 'Those who carried out the bombing are unpatriotic and wicked. They deserve to be apprehended and summarily brought to book.

'However, what the incident showed was that our national security is very porous. In other climes, security personnel would never allow a stationary car near the venue of such an important event. Can you imagine the American security allowing an immobile object, camera or bag near where President Barack Obama is attending an event?

'It is equally unacceptable that on a day our president was hosting other world leaders, bombs could explode close to the Eagle Square venue of the celebration. 'We should begin to take the issue of security seriously in this country otherwise we will be endangering the lives our leaders. We must take steps to beef up security around President Jonathan. If this could happen in Abuja, which is the seat of government, nowhere is safe anymore in the country, and this should be a matter of concern to all Nigerians,' Ekiyor said.