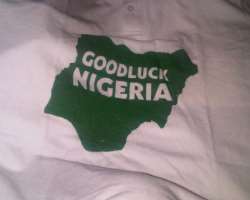 This is a transcript of an exclusive interview between CNN's Isha Sesay and Nigerian President Goodluck Jonathan at the Presidential Palace in Abuja.

Isha Sesay: President Jonathan, thank you, so much for sitting down to speak to CNN. Nigerian is celebrating 50 years of independence. I want to get your thoughts on what you think the country has achieved in that time.

President Jonathan: Within the past 50 years as a nation just like as a child that is starting developing, when you get to the age of 25 you look back and compare yourself to your peer. By the time you get to the age of 50 you also look back at what you have achieved.
One thing that I know and I feel Nigerians will celebrate is continuity and peace. Yes we experienced civil war that lasted 13 months. Some other countries experienced civil wars that lasted for years. We have our own challenges that government is confronting but still we play significant role globally.

Whenever they talk about Africa they want Nigeria's voice. So you can still see that Nigeria (can) still play a unique role globally and we are still united and confronting our challenges. That alone is enough to celebrate.

Isha Sesay: You talk about the unity and stability that Nigeria has as a feature at 50 years. Another feature is the high poverty rates and infrastructure issues that remain. These are two elements that exist in a country that over 50 years has established itself as a world leader in oil production. There is a lot of money in this country, I have been here several times and spoken to a lot of people, yet you are still dealing with these issues. Where has all the money gone?

President Jonathan: If you look at the money coming from oil vis a vis the population you see it is quite little. When you talk about the oil wealth you compare nations. There are some nations with less than five million people. Nigeria has 150 million people. I cannot say that all the money earned from oil since 1958, when the first drop of oil was exported from this country to date, that the money has been effectively used. I am not saying there are no leakages.

Isha Sesay: I want to look forward now. There are many who believe that with your decision to compete in the election you are going against the zoning agreement which states that the presidency will rotate between the north and the south every eight years. The late president Yar'Adua was a northerner. He died in his first term. There are those who feel that you are putting personal ambition ahead of the stability and peace of Nigeria. Is that what you are doing?

President Jonathan: Definitely not. The argument about zoning and the presidency of Nigeria is like the philosophical argument of the egg or the hen. Who is older through the evolutionary process, who came first? In the first place if this country had agreed the presidency rotates between north and south I would not be the president today. I couldn't have been if there is an agreement in this country that it rotates between north and south. I couldn't have been the president the day Yar'Adua died -- another northerner would have taken over and I could have continued as the vice president.

Isha Sesay: You are effectively saying if I understand you that the zoning agreement doesn't include the presidency. You are effectively saying it includes other secondary issues, because many disagree with you, even the former vice president Abubakar is not the case. They cite a 2002 meeting in December, a caucus meeting where they say there was an expressed decision to say it should include the presidency. Be that as it may, I ask you this question: should violence break out, which you can never rule out in Nigeria, unfortunately it is a reality. Should violence break out as a result of your decision, because the northerners are aggrieved, will you take responsibility for what plays out?

Isha Sesay: So categorically you say there will not be violence?

President Jonathan: We have security challenges, we have our challenges. If my interest would have instigated crisis that day the signs would have showed. If anybody thinks he will fuel crisis we will take him on.

Isha Sesay: What do you stand for? What are your policies?

President Jonathan: We want to lead a country where people will be less greedy. Where people will know that the commonwealth of Nigeria belongs to all Nigerians, where people's wealth depends on the people around you. If you become a rich person and everyone around you is poor you are very poor.

I want to live in a country where we no longer live as prisoners. Why do we have excesses of criminal activity now? Because the thinking is that the wealth is not uniformly distributed. A lot of young guys who have no jobs and they have no hope so they take to ammunition as some kind of anti-social living. We want to refocus Nigeria to make sure that basic infrastructure is provided. The environment is created for private investment, both within and direct foreign investment. So jobs will be created. That is my dream for Nigeria.

President Jonathan: I represent a group that is saying this country must be transformed. I am not saying that those in the past didn't do well. They tried, but using the capability of Nigerians. If you come to this country they are talking about brain drain. Well-trained medical doctors and engineers leave Nigeria to the developed countries. We want to reverse that.

Isha Sesay: Let's move on and talk about corruption. It is one of those issues here in Nigeria that every time there is an election, politicians stand up and say they are going to tackle it and get rid of it. That is just the ugly truth. Why should people believe you when you say that you will do something about the problem? Will you do something lasting about the problem?

President Jonathan: You can never play politics with the development of Nigeria. Yes the issue of corruption is a major challenge especially in developing societies not only in Nigeria. Even in developed societies, frankly speaking, it is just because their laws are so stringent and they (are) monitored.

Most of the people who create big corruptions here, especially the companies, they are not Nigerians. But the laws of the land and the he institutions that are set up to enforce these laws are up to the task. And what we have to... It is not me, Jonathan Goodluck, that will go and catch a corrupt person. But we will strengthen the institutions to do their work. That is what happens in developed societies.

Isha Sesay: I want to talk about the Niger Delta and what your plans are should you become president after the 2011 elections. What are your plans to permanently deal with the issues there?

President Jonathan: It is challenging especially now that resources are limited. But we must provide basic infrastructure. Second is the education. We must focus that area and make sure that the young men and woman from that area have an opportunity to be well educated. Because someone who is well educated, their orientation changes. And when you now educate the people they will now play a key role in the oil industry.

So if you provide the basic infrastructure, which can't be done overnight, you provide good education and you make them play a role in the long chain of the oil industry you will see that this restiveness will begin to get reduced gradually.

Isha Sesay: A place like Somalia for instance, if you are called on to submit troops to contribute troops?

President Jonathan: We cannot go to Somalia for peacekeeping. We must go to Somalia for peace enforcement. So if the day I (am) moving troops to Somalia I am going with all the force that will require. Now the UN must change the rules of engagement to allow us to defend ourselves. I will not allow one Nigerian soldier to be killed by anybody. But the rules of engagement create problems where you have very militant and non-cooperative militia group(s) who will see the UN troops as their enemies when they should see them as their friends.

Isha Sesay: So you would be looking to change the mandate, effectively?

President Jonathan: Yes. And we will go. We must not just send one. We must send enough and we must provide them with enough platforms for them to operate.

Isha Sesay: So the kidnapping of a school bus of children in Abia state earlier on this week. What is happening?

Isha Sesay: But is an operation underway?
President Jonathan: We are on it and definitely we will get them out.