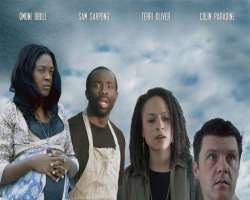 Shot in Brampton and Hamilton, Ontario Canada, 'Anchor Baby' the film that had its producer Lonzo Nzekwe chosen by the Reel World Film Festival as one of the 20 emerging film makers in Canada now bags two awards from the Harlem International Film Festival in New York City.

Harlem International Film Festival has had the honor of programming five years of diverse, quality films and gave 'Anchor Baby' its first award as the best film of the year and ace actress Omoni Oboli was pronounced the best actress for her roles in 'Anchor Baby'.

Speaking on why he chose Omoni Oboli for the lead role the producer Lonzo Nweke said 'That decision is one of the best decisions I made in the earlier stages of production. When I wrote the script, I wanted someone who could transform the script and bring it to life. I hired a professional casting director to audition all the actors I used in the movie. I sat through all the auditions and hand picked every single character in the movie. When I watched a few of Omoni's movies, I was convinced that she has the ability to transform the script. Plus, I did a brief background check on her and spoke to her extensively on the phone to know more about her, that's when I decided she was the one'

Visit www.anchorbabymovie.com for details of the film