WHY I CAN'T QUIT NOLLYWOOD 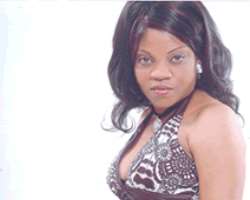 Bakare
She originally trained as an engineer, but today, pretty Adekemi Bakare seems to have abandoned her profession for the klieglights of Nollywood, where she's steadily building a career as an actress, singer and movie producer. In fact, her passion for entertainment and the need to participate actively in Nigeria's showbiz terrain contributed to her recent relocation back home from the US, after almost a decade sojourn.

Since becoming a proud member of Nollywood, Bakare also known as Skerry among her colleagues, has equally thrilled in some popular movies in the Yoruba genre. She further elevated her craft with the recent production of her first movie last year. Ever busy Bakare is currently working on two more movies, which she hopes to premiere and release before the end of the year.

Amazingly too, Pretty Ladies, the latest single from the mother of two, is gradually penetrating the airwaves, and she hopes to release the full album alongside the videos, in the next couple of months amid fanfare and razzmatazz.

Bakare's dream is to become a crossover actress that would constantly feature prominently in both Yoruba and English movies. This she hopes would assist immensely in bridging the wide gap between both platforms. In this hearty dialogue, the emerging talent unveiled her creative mind, mission, passion and power to Daily Sun .

How has it been with you in the industry?
It's been stressful, challenging, fun and memorable. I'm not complaining because I bargained for what I'm getting.

You're right; I recently produced a Yoruba movie called Eya-Arami, its out and doing very well in the market. It's about betrayal and destiny, and it's being marketed and distributed by High Waves Mart. I'm already working on my next movie project. And after that, I will embark on another project before the year ends.

How do you source for funds for your numerous movie projects?

I've a reliable person, who is my husband; he funds, supports and believes in all my projects in the entertainment industry. My husband is the one making me in Nollywood.

We would like to know more about you and your background?

As you already know, my name is Adekemi Bakare also known as Skerry among my colleagues and fans. I'm an actress, film producer, musician, mother of two and a married woman. In fact, I'm happily married to TJ Bakare. We've been married for over nine years. Talking about my music career, I've been singing from my primary school days, I started in my church's choir. Already, my single, Pretty Ladies, a hip-hop/rap song is currently on air, but the full album alongside the videos would be out hopefully before December.

So, between your acting and music careers, which one are you giving more attention?

They are both important to me, but my acting career comes first. I joined Nollywood in 2007 and have featured in close to a dozen films since my arrival. My first movie was entitled - Ajaga. I played a very challenging role in that movie. I later got another role, equally challenging in Osuka, I also have other films that are yet to-be-released.

How come you've not done any English movie in Nollywood, are you scared of crossing over?

No, how can I be scared. I've taken part in one English soap, but it's not yet out. And I hope to do more if I'm approached, because I believe and know that I'm very versatile as an actress. Why I'm more into Yoruba films is because it's easier for me to get roles from them than their English counterparts. And you do not expect me to be running after the English producers, because I'm extremely busy and engages in a lot of things.

Things like what?
First and foremost, I'm a wife and mother of two kids. I also run a one stop boutique and salon, called Beauty Supplies. I combine all these with acting, producing and singing.

Your odyssey with acting and entertainment in general, how did it begin?

I started in the U.S with Papa J Investment. Over there, I auditioned for a movie entitled My Drug Brother, but did not get to shoot with them, because of some logistic challenges. But I eventually ended in Nollywood through Ayo Adesanya, an old friend of mine. In fact, we attended the same secondary school in Ibadan before I travelled to the US. She eventually put me through and introduced me to her then husband - Gori Hassan. The rest is now history as they say.

But how comfortable is he with your public life in the industry?

My husband trusts me and is also very comfortable with my public life in the industry. He even encourages me to put in my best. He has never been skeptical or worried about my career in the industry.

But what if he tells you to quit, would you obey him?

Why not, but don't also forget that I'm a woman and there are ways I can make him change his mind and rescind the decision.

Have you ever been tempted on locations?
In what sense? (As in guys wooing you on set) No that has never happened; I usually do my beat and get out. Like I told you, I've been married for over nine years and my husband still trips me a lot.

Can you play deep romantic roles on set?
There is a way we go around such scenes on set and end up making it look real even when it's not real. But truth is that I cannot do the normal tongue -to -tongue kissing and all that. No smooching on set for me.

What if a producer demands you do the real thing, what would you do?

I think we should wait till then, but as a married woman; there are limits for me. One thing about me is that despite the fact that our work is very challenging, I equally like challenges. I'm a restless soul and likes being busy. I also write my movie scripts and lyrics myself.

Why did you decide to relocate to Nigeria from the US, was there an incident?

I relocated to do something for country and myself. Again, my passion for entertainment also brought me back. I still go for relaxations and business trips, but do not usually stay more than two to three months. I relocated fully in 2008, but I travelled last, November 2009. We were in Minnesota, Ohio and Houston Texas, while in the US.

Do you have role models in Nollywood?
Great role interpreters like: Ayo Adesanya, Joke Silva, Lanre Hassan and a few others really inspired me and I also see them as role models. Surprisingly, I've not been opportune to work with them; I look forward to doing that soon.

We've got lots of emerging actresses and producers in Nollywood, what do you think makes you unique and equally stands you out from the crowd?

The fact that I'm myself and well-exposed while living outside our shores. I'm here to make a change and that's part of the things that stand me out. My passion for entertainment is unrivalled and really stands me out.

What efforts are you making   towards crossing over to the English sector of Nollywood?

First, I want to start by producing my own English movies which I would also take part in actively. Because if you can't beat them, you just join them, I already have an English script that I'm working on and as soon as I'm through, we would go on locations and begin to shoot. A lot of people think most Yoruba stars can't be good in English movies, which is a big lie. The fact is that if you do not give them a chance   how will you know they are good and   probably better than most English stars. These are the people I want to bring into my coming movie. Because being a prominent Yoruba actor does not mean one can't do well in English movies.

What do you cherish most about being in Nollywood?

I love the films and the way we are respected too. But painfully, Nigerians hardly respect their stars; we are always relegated to the background. While I was in the US, we were always celebrating Nollywood stars and other celebrities. The reception of our movies and its stars are very high over there. We celebrate our stars a lot over there, but here, the story is usually different.

Share more about your family and academic backgrounds with us?

I attended St. John's School, Ibadan, Oyo State. I later went to Wesley College of Science, same Ibadan, I later proceeded to the Osun State College of Technology and graduated with a diploma in Electrical Electronics. I later   moved to the University of Ibadan and obtained a degree in Electrical Engineering before travelling to the US. Over there, I studied Mental and Dental Office Management. I also worked briefly with some financial institutions. I'm the first child and only girl in my family, and I have three siblings.

What is your take on the industry?
The industry is fast growing and improving, unlike when we first started. We are not there yet, but I'm optimistic we shall be there someday.

Aside my husband, I do not think any other thing can make me quit Nollywood.

If you are given the chance to have a duet with any Nigeria musician, who would that be?

I wouldn't mind Timaya for now, because I love his kind of dancehall music and I'm a rapper and a good dancer too like him. I   used to lead an all female group during my secondary school days-Fly Girls.