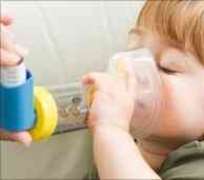 Asthma is caused by both genetic and environmental factors

A large international study has revealed several genetic variants which are linked to people with asthma.

The Imperial College-led research, published in the New England Journal of Medicine, could point to new targets for drugs.

Experts said gene testing could not predict who would get the condition.

One in seven children in the UK suffers from asthma, which causes the airways to become irritated and narrow, making it harder for them to breathe.

Continue reading the main story
Related stories
Pollution link to asthma in womb
Worldwide search for asthma clue
The reasons why people develop the disease are not yet fully clear, although scientists suspect a roughly equal mixture of genetic susceptibility and environmental factors.

The latest genetic variants discovered by the international research appeared in more than a third of children with asthma.

However, the gene with the strongest impact on children did not affect people who developed asthma in adulthood, suggesting that the two versions of asthma may differ biologically.

Some of the genes identified are involved in the body's system for telling the immune system about damage to the lining of the airways, while others appear to control how quickly the airways heal.

Leanne Metcalf
Asthma UK
Professor William Cookson, from Imperial College London, who co-ordinated the research, said: “Asthma is a complex disease in which many different parts of the immune system can become activated.

“Our study now highlights targets for effective asthma therapies and suggests that therapies against these targets will be of use to large numbers of asthmatics in the population.”

However, parents have been warned that although genes make a contribution to asthma development, there is no way to use a genetic test to predict the condition.

Leanne Metcalf, from Asthma UK, said: “This unique study helps us to understand in much more detail how the genetic side of things works.

“Importantly, it has also shown that genetic testing does not help to predict who is susceptible to developing asthma, meaning that early diagnosis and intervention, and effective treatment for everyone who is affected by asthma, are even more vital.

“However the most exciting part is that these results will now help to ensure that scientists are able to focus their research on the most influential targets for asthma, with the important long-term aim of preventing a condition which is responsible for the deaths of three people every day.”