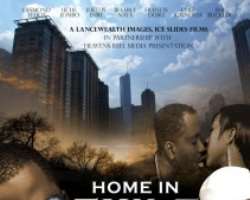 September 26, 2010 will be a day the movie world will not forget in a haste as all road will lead to the ancient city of Benin for the premiere of Home In Exile, the latest work of veteran movie director, Lancelot Imasuen.

A notch higher than what was obtained at the premiere of Ebuwa, a movie also directed and produced by Lancelot, few years back that had more than 32 stars in attendance,the premiere of Home In Exile will be a more star-studded event as plans are in top gear to ensure that the premiere turns out to be an A'list event.

To give celebrities the comfort they deserve, the organizers of the premiere have arranged top class hotels to cater for the lodging of the stars that will be storming the event. The hotels that will be housing the artists include Wesley Hotels, Meridian Lodge, Olivera Intercontinental hotels and the newly opened Alice International suites and hotels. Also, Clue Lounge, an exclusive top class lounge in Benin will be hosting the artists to a Moet night while popular cab service provider, TK cabs will be the official cab for the premiere. Not a few artists have indicated interest in supporting the event with Desmond Elliot already billed to do the advert.

Government is not left out of the celebration as the Edo state government has thrown its weight behind the premiere through the arts and culture ministry; the chief host is the honorable commissioner for arts and culture, Honorable Abdul Oroh. There will also be a joint massive participation by the people.

Also supporting the premiere are, the Edo state House of assembly through its representative, Hon. Patrick Osayimen and the Oredo Local government Chairman

Contrary to what was earlier announced, the movie now premieres on the 26th of September instead of September 18 that was previously announced as the date for the premiere.

Explaining the reason for the shift in date, Lancelot disclosed, “I was abroad, I just came back, we also had a premiere in Atlanta, so we wanted to make sure that we did not have a clash, so that is why the date was moved and also to accommodate all interests. There is a mad rush from all the beautiful ladies in Benin to have invitations, there are calls from right, left and center everybody wants to be part of the event.

The movie, Home In Exile reveals the inherent selfish nature of man. It exposes how humans extol tradition when it favors them and abhor it when it comes against us. Dave's (Desmond Elliot) fiancée Julie, (Beverly Naya) has to marry Dave's father who is the king, a repercussion for her sitting on the king's stool which is an abomination, this sets father against son. The movie also exposes how selfish humans can get in acquiring wealth while relegating need for human development to the back ground.

Though just about to be premiered, the movie has won numerous movie awards which include the ZUMA awards for Best film on Tourism and Best Script. The movie also carted away five awards at the Terracotta awards; the awards are. Best Director, Film of the Year, Best Cinematographer, Best Make-Up, Best Costume and Best Supporting actor, Francis Duru.