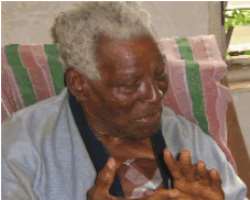 
Lt-Col Conrad Nwawo (rtd), 78, was a mentor to the late Major Kaduna Nzeogwu, leader of Nigeria's first military coup which occurred on January 15, 1966. The Nigerian civil war veteran also taught the young Nzeogwu at the military school. But for Nwawo's intervention, who was then, Defence Attache at the Nigerian High Commission, London, UK, the 1966 coup would have degenerated into an immediate civil war. He, alone could stop the 'unstoppable Nzeogwu.'

During the civil war, his name meant different things to different people, depending on which side of the divide you were. To some, it evoked bravery and courage, while for others, it signaled imminent danger. Recently, at his Onicha Olona, Aniocha North Local Government, Delta State, residence, the former warlord took Daily Sun down memory lane. He spoke on his relationship with Nzeogwu and the previous battles he fought before the Nigerian civil war. Excerpts:

When did you join the military?
I joined the Nigerian Army on December 1, 1950. It was then called the West African Frontier Force. I was commissioned on May 28, 1954, at Ettenhall, UK, as a second Lieutenant. I would later become number 10 in the Nigerian Army. During the crisis of 1966, in the four major regions, there was a shake-up in the Armed Forces.

Where were you during the first coup?
By January 1966, I was the military attachÃ© and Defence aAviser in London. I had to fly back to Nigeria because of the situation then and I had to come from Lagos to Kaduna.

Why did it have to be you that were called back?
I had to be called back because I was a very senior military officer. I was a Lieutenant Colonel and I happened to be from the same region with Major Nzeogwu. Apart from that, I was also Nzeogwu's teacher in Military School and we had a very good relationship. So, that relationship had to be tapped to get Nzeogwu convinced to follow me to Lagos. No other person could have taken Nzeogwu to Lagos except me because he regarded me so much. He was just like a son to me.

If Nzeogwu had no respect for any other person, he had very high regards for me and respected me so much. On that day in Kaduna, I addressed the officers and told them of my mission which was to go with Nzeogwu to Lagos. The address was cordial and the parade was good. He was more like my own son and so he had no problem as he too, briefly told the officers that he was going to Lagos.

Could you recall what happened between Kaduna and Lagos?

At the time of Ahmadu Bello's encounter, during the shoot-out, so many things happened. Nzeogwu was injured. He had shrapnels on his hands and was taken to the Military Hospital, Kaduna. He was treated by one young lady, Miss Alice Mordi, who later became Mrs. Alice Onogwu. She is from around my place here. She hails from Ukala in Delta State. She is married to an Ogwashi Uku man.

What kind of person was Major Nzeogwu?
He was a patriot and a nationalist to the core. He wanted the best for Nigeria. He was so much like a son to me. We had a very close relationship

Before the Nigerian civil war, did you fight any other war?

From the Congo operations, the Queen of England gave us an award, the MC which means the Military Cross. The award was given to just the two of us. I and Adekunle Fajuyi were the only Nigerian military officers to be so honoured in the history of the Nigerian Army. We were the only two. It was a professional award given by the queen then. By the time I got the award, the Nigerian Army was still known as Queen's Own Nigeria Regiment.

What was your relationship with the late Adekunle Fajuyi?

He was a junior officer to me. Adekunle Fajuyi was killed on the same day when they killed Major-General Johnson Thomas Aguyi-Ironsi.

Can you remember one striking experience in the Congo operations?

The Congo United Nations operations were brought about by the fact that they were not organized to do things so the Nigerian Army was left to do that. Other Commonwealth countries were there. And of course, we were very efficient. We knew our job. I was a Major. I was a Company Commander in the Congo. It was not as a result of a company action. It was a lot of individual action.

Could you recall your parents' reaction when you were going to the military?

My father was not very happy at all. I remember that day. It was on a Saturday. I was ready to go to the NMTC, military school. I was very happy. I had come from Lagos, working my way through the military. It was not an easy matter at all. They had to get to the divisional officer in Benin City to find out about my parentage. That was in those days. I knew that was happening but I couldn't care less because I knew that nothing would happen. They just wanted to know whether we were from a fighting stock. You know what it means, then.

How old were you when you joined the Army?
I was in my early 20s because I had finished secondary education and gone to the School of Agriculture, Moore plantation, Ibadan. I graduated in December 1946 and started working as a civil servant before I went to the Cameroon.

What happened and how did you move from the Nigerian Army to Biafra Army?

The thing came and swept all of us. It was at the 4th Area Command in Benin City, then. Emeka Odimegwu-Ojukwu was very keen to have me in particular. It was a question of loyalty. One had to be careful about it. I was very loyal to the Nigerian Army. Whatever happened, I couldn't care less. I was in the Nigerian Army until things started happening.

At Umuahia, where you were said to have been caught off in ambush, although, you still pulled through, what gave you the courage to fight the way you did at that time?

The courage was because I was the Commander and a Commander is a courageous man anytime. I had a strike force at Umuahia and we were caught off. Then, we got there and bulldozed with my group across the federal forces. When we had succeeded in clearing them, and we were coming back across a river, I told my men that I would not step into the river or walk across it.

I told them to lift me over and above the river which they did, of course. The idea was that I wanted to see the picture of that particular portion so about 10 men had to carry me over the river. That was an incident that has remained memorable. It was an experience for about two days in the bush with the federal forces before we cleared them.

Was there any other striking experience?
As the Commander of the 4th Area Command, when we had taken off our defensive positions, which was why I was sent to Onitsha to take over the defensive there, along the River Niger. Having deployed all available men there, I observed that the troops had fought there but they were not quite organized and not very reliable too.

We had to push in some strength by visiting them, redeploying men. At that point, I was moved in there to hold them and to try and organize them because those we met were not so reliable.

Sometimes, when I went through the bridge now, and on the left, I remember things. When I saw the river, I remember Abagana and the incidents leading to it and all of that. I remember Achuzia and Madiebo when we deployed at Abagana.

I also remember one very striking incident at Itikwukpo junction when Achuzia had told all the other soldiers to go back to their places as he didn't want the senior people to be behind him. Just as they were preparing to move after telling them, and in less than 10 minutes, they started bombing. One of the bombs fell just on where we were standing. Madiebo was wounded with some shrapnels. I also had a small one at the back. We were all rushed to Iyienu Hospital. So these are some of experiences that I try to recall.

Did you have a specific position in the Biafran High Command?

Of course, yes. I was the head of the strike command.

What is the name of the strike division that you had?

It was called the 11 Division. That was the command that moved from Onitsha. There was another one, the 13 Division. Then, there was the Commando Group which was the final one. We had people like Emeka Ananaba.

Can you remember any major decision you took that either helped or influenced Ojukwu during those hey days to accomplish what you people had aimed at?

What was your relationship with Ojukwu?
Ojukwu had great respect for me throughout the Biafran war and I knew that. He showed me a great measure of respect. And he was always saying it that he had great hope in my capability. That was quite understandable. He knew that I was there with my whole being. And there was no question about that. He always said it