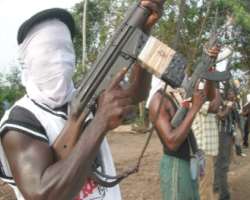 
KANO, Sept 14, (THEWILL) - A senior operative of the State Security Service (SSS), Malam Garba Bello, 54, his wife and three children were in the early hours of Monday murdered in Kano by unknown assailants.

The incident occurred at the residence of the deceased along Zoo Road Housing Estate in the Municipality.

The wife, Habiba Garba, 40, was murdered along with her three children, Hafsat 16, Khalifa 14; and Murjanatu 5, while two children, Farouk and Bello, miraculously survived as one of them locked himself in the toilet and the other one escaped through the fence when the assailants entered their home.

THEWILL findings revealed that due to the intensity of an ailment the deceased suffered from during the recent holy month of Ramadan, he could not observe the Ramadan fasting. Malam Bello was former a medical personnel before joined the State Security Service.

THEWILL also gathered that Bello alongside his wife and three murdered children have since been buried after their bodies were retrieved from the hospital.

The Police Public Relations Officer of the state police command, SP Baba Muhammad, who confirmed the incident said the deceased who was serving in Sokoto State, came to Kano for medical attention at Aminu Kano Teaching Hospital (AKTH).

He said even though no arrest has yet been made, the command is carrying out an investigation with a view to tracing those behind the heinous crime.

The Commissioner of Police in the state, Alhaji Muhammad Gana, who also visited the house, told journalists this morning that police investigation into the incident had already commenced.

He said the police suspected that the culprits were hired assassins, noting that no item was stolen from the house.