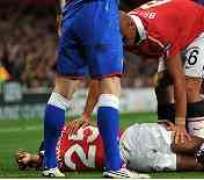 Manchester United midfielder Antonio Valencia suffered what appeared to be a very serious injury in the club's Champions League tie against Rangers.

In the second half at Old Trafford, Valencia was involved in a challenge with Rangers defender Kirk Broadfoot and required immediate attention.

Television broadcasters decided against showing a reply – indicating the severity of the incident – and Valencia required lengthy treatment before taken immediately to hospital.