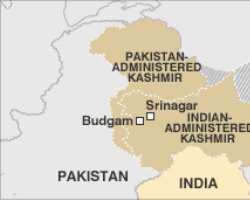 A mob has defied a curfew in Indian-administered Kashmir, pelting the security forces with stones.

Police fired tear gas at the group in Khanpora Baramulla district, north Kashmir, and one man was injured. The curfew has been extended to new areas.

The protests – the latest in a series of violent demonstrations – are over reports of Koran burnings in the US.

More than 80 protesters have died this summer in widespread anti-government demonstrations.

Nearly all of them were shot dead by government forces after protesting against Indian rule in Kashmir.

All commercial flights to Indian-administered Kashmir have been cancelled for three days, because of the ongoing trouble.

Police shot dead 18 civilians on Monday in the deadliest day since the Kashmir protests erupted three months ago.

Continue reading the main story
KASHMIR FLASHPOINT
Angry housewives
Back to frontline
Q&A: Kashmir dispute
Twenty years on
A policeman was also killed when he was run over by a lorry.

The BBC's Chris Morris in Delhi says that there is now an enormous sense of anger, and many people see this as the biggest challenge to Indian rule in Kashmir for 20 years.

One suggestion supported by Jammu and Kashmir Chief Minister Omar Abdullah – a government ally – was to ease emergency regulations as a gesture of goodwill.

But a decision on that has been put on hold – many in the security establishment do not approve.

Our correspondent says that there is no sign at all of any progress towards a lasting settlement of the Kashmir dispute, which has poisoned relations between India and Pakistan for six decades.

The latest protests in Srinagar were over reports of Koran desecration in the US, which stoked public anger.

The curfew was extended on Tuesday to cover fresh areas and thousands more federal police were deployed across the valley.

Continue reading the main story
SUMMER OF DISCONTENT
• On 11 June, a 17-year-old student dies after being hit by a tear gas shell during a protest in Srinagar.

• On 7 September a curfew is imposed in Srinagar by Indian authorities.

• Death toll from protests rises to 69 by early September.

• Reports of Koran desecration in the US trigger fresh protests on 13 September, leaving 15 more dead.

In pictures: Kashmir protests
Thousands of people defied the curfew and took to the streets on Monday, chanting anti-India and anti-US slogans and burning effigies of US President Barack Obama.

Protesters set fire to several government buildings and a Protestant-run school, as well as attacking a police station.

Police fired live ammunition to break up the demonstrations. Eighteen civilians were killed and more than 100 people were wounded.

A policeman died after he was run over by a lorry driven by demonstrators in the town of Humahama.

The Indian government said it was “deeply distressed” by the violence.

The latest violence was mostly caused by last week's plan by a Florida church to burn copies of the Koran during the 9/11 anniversary caused outrage across the Muslim world; it was eventually called off.

But reports that pages had been torn from a Koran outside the White House over the weekend reignited the controversy and further heightened tensions in the Kashmir Valley.