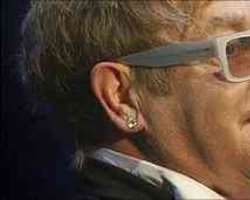 Tickets for the festival will go on sale later this month

Singer Sir Elton John will open this year's BBC Radio 2 Electric Proms, it has been announced.

The star will perform tracks from his new studio album, The Union, with musical legend Leon Russell. He will also collaborate with rapper Plan B and hotly-tipped balladeer Rumer.

In a statement Sir Elton said he was “delighted” to launch the musical festival, which starts on 28 October.

Led Zeppelin's Robert Plant will headline the second night of the event.

Sir Elton's concert will take place at London's Roundhouse and will be broadcast live on Radio 2.

It will also be broadcast on BBC Two, as part of a special one-off series called A Night In with Sir Elton John, which will also include a documentary about Sir Elton's life.

“I'm delighted to be kicking off this year's Radio 2 Electric Proms, particularly as I'll be joined on stage by Leon who is one of my musical heroes,” Sir Elton said.

“The performance will feature some very special guests and memorable moments.”

Grammy award-winning Plant will take to the stage on 29 October with Band of Joy and the London Oriana Choir.

His performance will also be screened on BBC Two as part of a night dedicated to the artist.

Tickets for the festival, which stages special collaborations and one-off performances, will become available later this month.

Previous artists who have performed at the Electric Proms include Sir Paul McCartney, who played Eleanor Rigby with a string quartet; Dame Shirley Bassey accompanied by Manic Street Preacher James Dean Bradfield; and James Brown, with guest backing vocals from the Sugababes.