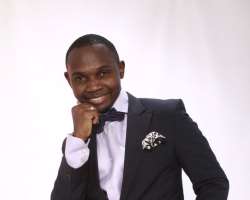 Why has acting taken a back stage for you?

Because I really don't enjoy acting like that and the industry didn't really encourage me anyway and I doubt if it was only me. It is not a very encouraging industry around here. I mean, you would have thought that after Diamond ring, I would have made it into the big league.

Did you pursue it?

Did I pursue it? I remember going to someone's office after Diamond ring and this man made me queue for an audition; I read two lines of the script that wasn't even suited for me and I was asked to go. I mean, I went to places, I don't want to mention names, I tried. I acted in a few films after that but it was a harsh industry.

That is your view and I wouldn't blame you for seeing it that way, although I wouldn't agree with you. I didn't get discouraged. I was doing acting and I was doing comedy too and I thought acting was going to be the main job and comedy would just be what I will do on the side, but as it turned out, comedy opened up ways and acting was there looking at me, doing nothing for me. So, I pursued comedy. Was I supposed to cast the gift of comedy back in the face of God and insist I wanted to be an actor, when comedy was opening up gate ways? They say man proposes God disposes. I don't exactly apply it thus in this particular instance, but it just happened to be that where I thought was the path wasn't the path and I have now found out that I really do not enjoy acting. You can ask Mr. Tade Ogidan, the work he had to do to get the performance in Diamond ring out of me. It wasn't as easy as it ended up being. There were times they had to record me over and over and I really did not enjoy being recorded over and over.

So, why did you give it a shot in the first place?

I was in year two in the University of Lagos and Tade Ogidan wanted to put me in a movie. Was I supposed to say no? Don't get me wrong, I loved to act back then because I was a member of Theatre 15 in school. At the time I did Diamond ring, I didn't do it grudgingly, I did it with a lot of passion and love and I was very excited. But with the benefit of hindsight, having done some years in entertainment, I have actually found out that if I had to do either, based on what I have done thus far, I would rather deal with comedy. I don't even like comedy that much these days.

Because we progress in life. It is a marathon, a journey. Everything is a means to an end; there is nothing that is an end in itself as long as you are working with a vision that God has given you. Acting was a means to an end at that point in life. Maybe that end was to meet Tade Ogidan who is now the director of Teju Baby Face Show, and Richard Mofe Damijo, who has been a great influence to my life, etc. I left acting and got into comedy and comedy is also a means to an end as well, the end being that I could come up with some other things.

So,this explains why you are hardly ever visible on the comedy scene. Does this mean you are done with comedy?

What prompted you to start The Teju Babyface show?

I felt some disquiet in my heart about six years ago. I just started to feel that stand-up comedy has taken me as far as it could at that time and by some research which I carried out by omission, I found out from the progenitors of comedy that after a while, comedy simply became a means to an end for them. I wanted to get to another level rather than to keep emceeing weddings and shows. So, I started to pray and the vision was delivered to me by God right in a church programme.

How has it been thus far?

It has been very difficult. I have been awake since 3.30am, sitting in front of the computer trying to figure out ways to raise funds, because it is such an expensive venture.

You don't have sponsorship?

But with the high calibre of guests that come on your show, getting a sponsorship shouldn't be a problem?

You would have thought so. We would get there; the vision is yet for an appointed time. The easiest answer I can give here is that Rome wasn't built in one day, but the point is that you have to have a forecast. Things don't just turn around the first day it starts; you have to persevere in it. If you stay with the vision long enough, then things will begin to happen. It has been difficult, television stations won't give you free airtime and the show has to be produced somehow

How do you fund the show then?

God tells me per time and I have to carry it out diligently. If I have to meet someone for funds, I have to be prepared with my figures and feasibility studies in order to make a good pitch. As spiritual as that sounds, that is the truth. You can't throw away work when it comes to faith. I have also found out that money follows value; so, if you are adding value to people through your show, getting impacted, then money follows value and you have to find a way of turning that value into money.

Your show has been getting some rave reviews and accolades. How does that make you feel?

It makes me feel good in the validation sense of it. It means that I wasn't wrong; that I truly heard from God and that what I drew out on a piece of paper is beginning to take shape and that above all these things, it means that I am a valued proposition; that the world is beginning to reckon with what I am doing. People have always known me, but I am a bit more popular and now, respect has entered.

Yes, we won the The African Audio Visual Awards, TAVA, just about a month ago for excellence in directing. We had only been on air for a month when we won that award.

What are your projections for the show in the next five years?

Unless God changes it, we are still going to be on in the next five years. There has to be a place where a politician wants to talk about his plan for the nation, out of his suit and tie, to talk about it in a way that it doesn't bore people. We poke fun at him and he does the same to us and everyone is having a good time. We want it to be a programme that brings the whole family together, like the defunct Bala Miller show, The Art Alade show, etc. We don't have them anymore. We also intend to build a television empire. Quality television in Nigeria is almost none existent, with due respect to all those who have done it before me and those who are still doing it.

What determines the calibre of guests you feature on your show?

They have to be exclusive, interesting and popular. The popularity part is the smallest part of the three because, as time goes on, we will begin to empower other people who are exclusive and interesting and who may not be so popular; but by reason of being on our show, the name becomes a bit more popular

What else do you do?

Nothing else. Teju Baby Face Show is all I do. One of my mentors, Leke Alder, always says you need to consolidate before you diversify. I have no business investing in other businesses when my own business needs the fund and isn't where it is supposed to be yet. I must be on top with this present task before I start to diversify into other things. You need to make a success of one thing before you move on to some other things.

You have been in the public eye for quite a while now. What has been your staying power?

It has been by omission, not by commission. It is God, really. It isn't like I do anything special; I just try to do different things at certain times. I tried doing many things, some worked out others didn't.