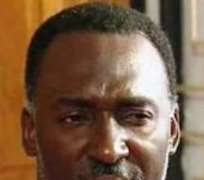 It was so brazen of star actor Clem Ohameze who has featured in most of the Nigeria movies to admit he is a fine man and appreciated by women. But he does not see this virtue loudly flaunted by him as an excuse to sleep with his fans. “ I am a fine man with or without acting, I get appreciated by women but first and fore- most I respect my marriage, and I don't sleep with my fans”, he said.

Fans
Although he is handsome, tall and with a pointed nose, the Nollywood actor says to anybody who is willing to listen that he respects his marriage so well and will not lay down his reputation and mess around with other women, no matter how much they woo or appreciate his looks. Ohameze is conservative and says he does not like being called a star, although admitting that movie watchers like to see his face and most times buy films because he featured. “Everybody is a star and it depends on the way you look at it, it' s only natural that you get attracted to the opposite sex”. Giving a peep into his world of admirations to the opposite sex, he informed that most of his fans are women. “If I am not exaggerating, about 92 per cent of my fans are women and I still believe that it is only natural that you get attracted to the opposite sex. But that notwithstanding, I respect my marriage, I don't engage in any inordinate relationship with them because that will make me cheap”. To drive home his reservation about such relationships, Ohameze insists “ it can debase a man. Although I really appreciate girls, appreciation should not go skin-deep. One should not capitalise on the fact that many people call you a superstar and then take that as an advantage on people”.

Not just acting
The Nollywood actor with diploma in Mass Communication, and a degree in Sociology from the University of Port-Harcourt said before he joined the movie industry in 1996 that he was a businessman. “Outside acting, I still do other businesses. I was a contractor before I went into the industry, my entry into acting was through happenstance because it was a friend who introduced me to the movie industry. 'The friend was a schoolmate of mine, and he believed I would do better in the industry. So when he was going to direct and produce for Hint Magazine, he invited me for audition which I attended and surprisingly, I took the lead role, it was blissful and God has been very wonderful.” He added that although he was nervous his first time, especially working with big stars in the industry as time went on he was able to overcome.

Embarrassing moment
Speaking with Saturday Sun, the Imo State-born actor who calls his fans attitude towards him as something a little away from outright embarrassment caused by excessive excitement said “ the way they behave towards me is out of much excitement, in the sense that most times they don't know how to contain their feelings when they see you. They act like people forced to do one stupid thing or the other, but if you understand them, you will know the reason. That understanding I have developed over time makes me understand that they are not actually out to embarrass”.

Immuned to criticism
“Every role is challenging and no story is small because I give myself into every movie, and I believe that I've created a standard which people look up to”. To underscore his resolve to always strive higher, he has also concluded that criticisms would never take him aback. “Instead of allowing critics to have the better of me, especially those that don't actually point out the errors to correct or build but to bring down, I would rather take seriously every movie I take part in. “Because of my liberal approach to my roles in all acts, I cannot pinpoint particularly a film that has been more challenging than others. But talking about stress, some movies are more stressful than others. There are stories where you relax and take your lines, but there are some you go to the field and into the bush like Price of Sacrifices, which left me all soured but when the film came out it was worth the trouble, no pain no gain”.

Playing real
You might not guess accurately why Ohameze seems to emerge the best and most natural in his roles until you listen to him say “I always come out with the best because I imagine my self to be the real person in that character. “I don't follow what is in the script most times. What I do is to go through the story and imagine if I found myself in that situation, what I would do. By putting myself as the real person in that character I get natural in movies and it has really helped me to interpret my roles”.

I can act nude
Talking about romance in films, Ohameze said he could go any length just to do his job, “ once the script says so. I have no limits, it's my career after all, I will act nude if the need be, it does not actually matter, especially with a wife who understands my career. I am fortunate to be married to a very exposed and educated woman. She has been abroad for almost 18 years, and knows what my kind of job entails. She knows my career is a make-believe, and so my wife understands, knowing full well that everything ends where it starts”.

Happiest moment
Ohameze who is married and has a child, recalled that his happiest moment was when his wife was delivered of his daughter. “She was on her way to London to have our baby when her water broke in the air. That was ten minutes to her arrival in London, so she was rushed from the plane to the hospital. When I got the call, I prayed that everything should be alright, and fortunately, at the second call was the great news that she had been delivered of my daughter”.

No sexual harassment here
Those that allege sexual harassment in the movie industry are liars, so says Ohameze. He challenges them that “ the best way to prove the allegation is for one of them to identify herself a victim. We have been waiting for the opportunity when a person will come out to tell us that she has been harassed and who harassed her. But all we hear everyday is that I can't go into the film industry because there is so much sexual harassment. Apart from these unsubstantiated claims, we all know nobody can force you to sleep with you, otherwise it will be rape and it is criminal. You can only sleep with a man you want to. All I know is that these things are rumours. I remember sometime in the past when a rumour hit the streets that Nkiru Syvanus was dead, Nkem Owoh, dead and Clem Ohameze, dead. That rumour started somewhere. So anybody that is sexually harassed should come out and say it, because I have not heard that any artiste or director was arrested for rape and subsequently prosecuted and jailed when found guilty”.