Nothing Is Wrong With Endorsing Goodluck Jonathan— Ngozi Ezeonu 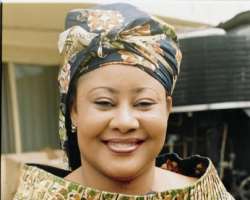 THE first time I met her was way back in the eighties. I was a teenager and had gone with my friends' movie director Madu Chikwendu and Christopher to Owerri from our Aba base to cash a cheque. We had gone into this restaurant to eat and a beautiful an absolutely charming young woman who years later I found out was Ngozi Ezeonu was helping to serve food. It was her mother's restaurant. We went back to that restaurant many times to look for the little angel that had brightened our day that rainy Wednesday in Owerri but Ngozi did not give us the light of day. Next time I met her, I had already become a movie director and she had already become a movie star, having starred in Kenneth Nnebue's Glamour girls. She walked into the auditions I was casting for and we became great friends.

Everybody attests to Ngozi's charm, grace and most of all her humility. She has become the role model for many women and young girls and hitherto has been free of scandals and bad report in an Industry that is bedeviled by scandals. But recently has faced some flak especially with the rumors that she had moved out of her matrimonial home and also with her involvement with the Artistes for Goodluck Jonathan campaign led by actor Francis Duru.

“My life is a very private one. I have three kids, a girl and two boys I am happily married and that is all I am going to say about that. The kind of job I do has its pressures but I was already doing that job before I got married so my husband understands those pressures and has helped out in his own way. I appreciate that and I refuse to be dragged into this dig up dirt about every actress campaign that is going on in Nollywood right now. I do not have any skeletons in my cupboard so I just wish that people will leave me alone to live my life.”

Presently on set for the recording of Osuofia In Brazil, a movie he is making with Nkem Owoh in Enugu and Sao polo Brazil, Ngozi Ezeonu reacted to some salient issues we raised about her work and Nollywood.

“I laugh when I hear that Nollywood has been rated as number two movie producing cultures in the World I start laughing. What is it that makes us number two. Is it in the quality of the rubbish we are producing. Mind I have not said that Nollywood is absolute rubbish I said the rubbish that is being produced. We were once on the right track but things have changed drastically. This thing that is called packaging has killed our industry, where a producer decides to use the same artistes to shoot five movies of four parts at the same time. The artistes are overworked, paid pittances and are bereft of interpretations for the parts they are made to play because they do not have enough time to remove themselves from one character and enter another one. the quest for quick money has degraded the quality of Nigerian movies and until we finally settle down and wash our eyes well before we continue with movie making.”

Ngozi hails from Anambra state and grew up in Owerri. She was into modeling before she came into Nollywood.
“I was discovered by Zeb Ejiro. Who had seen me and recognized me as the girl who had advertized Phensic. He called me and cast me in one of his movies. I cannot remember exactly which one it but that was how I came in but I have succeeded not because of how hard I have worked but because of the grace of God. He is the one who has led me through all that I have gone through to the point where I am today.

I was disowned by my mother because I went into acting but my father was there for me all the way but look at my mother today, she is the happiest of women. Growing up was difficult. We did not have much but it was a happy home but my mother is still my role model because after my father died she stood there and took care of us with the little she had. She is a very strong woman.”

A long journey that has led from one level of success to another Ngozi has been to different parts of the world but still says that her bedroom is her favorite hangout. But what is this epitome of propriety toying with the controversial for.

“I believe in enjoying the good things of life, I also believe in success and I think our president has done pretty well so I and a group of other artistes have come together to support him by endorsing him. I do not think anybody should criticize what happened. We did not go to him looking for money. We got together and did a song and there was some money for the song, I believe it was three hundred thousand naira. I was not there when the song was done because I was on set. That does not mean that anybody went to the president to collect any money. If there are some artistes who have spoken up against it it is simply because they thought we had collected all the money in the world and they did not receive their share. What we have done was for a good cause. And after all there is freedom of association in this country.”