We didn’t break up over boyfriend snatching - Iban girls 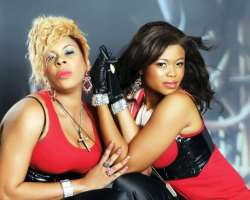 Vivian Richard and Pamela Eboh are the remaining members of Iban Girls – a musical group of three ladies that used to be popular but suddenly went cold. In this interview with Ada Onyema, Richard shares all the details of their rise, fall and other sundry issues. You used to be very hot in those days? Yes, very hot and we are still hot. But suddenly you went off the scene.. What happened was that Ify Arinze the other member of the group had to leave because she wanted to do her own stuff. She said she does not want to be in the group anymore and we have to replace her with Pamela. While going through all that, we did some repackaging , new songs and that took a long time. It is just remaining 2 of us Pamela and I with Segun Arinze as our co-ordinator. Most of the time we are always in Ghana for shows, it's just that this period we are around but would be going back to Ghana next month.

You were three in the group and now two, why?

Nothing really happened, it is just that Ify left to do her thing.

Learnt she left because you had a misunderstanding...

We can't have misunderstanding because I and Ify were living in the same house and we were like a family .

Even same siblings do quarrel and fight.

But we did not quarrel not to talk of fighting.

But your close pals had it that you seperated because money started flowing in and all that.

Money was never an issue, I don't know why everybody is attributing it to money. There was no money problem; at that time we were actually hot, everything we did was on the three of us: promotions, video we put our resources together and get things done. There are times that I may not have money, Ify or Pamela would fund the bill and get a refund later, same thing applies to all of us. And most of the time money comes in; we know how the money goes. There was nothing like Ify or any of us took money. Whenever we are having a show, we know what is coming in and what to be spent.

So where do you think the story emanated?

I don't know where they actually cooked it from, if there is any cash coming in; we all would know. It was not as if we had a label and someone was trying to cheat us; nobody was cheating anybody.

Another source had it that you were dragging and fighting over your boyfriends.

Boyfriends, how can we drag or fight over boyfriends? You know definitely people would talk because when they see three women walking as friends that such may exist; there was nothing like that.

But instances abound especially with ladies where one can be attracted another's boyfriend.

Nobody did such. If you ask Ify the same question, she would tell you that such a thing never happened. She had her own boyfriend, Innocentia had hers and Pamela as well. But we respect that, we know one another's boyfriend. If I have problem with my boyfriend, Ify can step in and vice versa. Whenever one is emotionally down, we are always talking and encouraging one another.

I heard Ify snatched boyfriend from you.

Never, nothing of such happened. Ify is not like that and likewise me. I trust Ify, Innocentia and Pamela. Who is the person they are even snatching, the so-called boyfriend we are talking about, Innocentia still has her own, Ify has hers and I still have mine, so where is the snatching coming from? We are here for people to appreciate our music and talent not just looking at our bodies.

And you never tried snatching Ify's man from her?

Ify tends to have the upper hand in the group because when she left nothing much was heard from the group.

Nobody has an upper hand in the group; three of us are equal.

Nobody sings better because talent is different, you can be a singer but not a good performer, a performer and not an entertainer. Everybody in their own right can sing, even talking may be your own way of singing. I can't say she sings better than me or I sing better than her or she dances better than me. The only thing I can say is that we came together to do something and we did it, there is nothing like she has the upper hand or was the backbone; I thinnk our backbone is God. We can't say we did not feel her absence, we did because we were together for a while.

How did Iban group come into being?

I used to be in a group called X5 under Pem and they kept us for two years and nothing was coming in. Then Ify was staying with me and we said there is no strong female group in Nigeria because most of them after a while fall apart. I called on Innocentia, who also had was interested and we started going to the studio for rehearsals, voice grooming, writing songs and after a while we came out with our video and songs.

What is the meaning of Iban?

Iban is an Akwa Ibom word for a lady. The full name is Light ladies, ladies with presence.

Why did you decide to stick with the name?

Nothing, we wanted something that would identify us with our roots.

How come you picked a name from your state when you have other members from other states?

They actually brought names but because we wanted something to identify us, we all agreed that this is short and unique.

You are a jack of all trades and master of none?

I don't think so. Rather, it shows that you are eclectic to identify with different people at different times and as a singer it pays to know different genres of you industry.

Most people are into entertainment to make money and fame. What's your reason for being here?

The passion comes first, then you will think of the finance. If there is no passion, the few break-ups we had, I would have left the industry. But we have the passion. That is why you see us still doing what we do today. It is something that I have actually desired to do right from my childhood.

What kind of impression are you showing as a pastor's daughter in entertainment industry?

My parents saw it in me; they knew I love it and even when I got to Lagos I was in the music industry. I have acted in some movies though I don't have much time for acting, but I love acting. I think my parent saw it in me and they have shown me the way to go. It is true that people expect much from pastor's children but I always tell them, God did not call me, he only called my parents. It is my talent, funny enough , the church where my parents pastor does not approve of wearing earrings, weave-ons or wear trousers.

So does it not bother you?

I tell people to listen to my dad's preachings, don't look at his children. Jesus should be their saviour, I'm just human.

Love has no shape it has no size, I cant say a fat, tall, fair man, anywhere I find love I take it. if the person is who you are compatible with, you understand yourself people think love is the foundation of relationship. No, it is understanding and compatibility and these are the main thing in relationship.

Supposing he asks you to quit music?

Where did he see me? He saw me in it now, so he should know it is part of me. I won't even give chance for that because it is like telling someone's soul to leave the person. Entertainment is me.