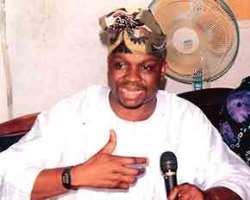 The electoral body had, in an advertorial in some national newspapers, said that governorship polls would not hold in January 2011 in Rivers, Edo, Ondo and Anambra States because their governors took the oath of office at a time different from the others.

But Oni has since kicked against this comment from INEC saying his tenure started counting after he was inaugurated following the controversial supplementary poll held in April 25, 2009.

But one of his predecessors who is now a chieftain of the Labour Party, Fayose, said that INEC's comment on the election date was a confirmation of the ruling of the Federal High Court, Jos, that Oni's tenure would expire on May 28, 2011.

Fayose, who spoke in a telephone interview with our correspondent in Ado-Ekiti said that Oni had known that his tenure would end in 2011 if he could survive the appeal filed by Dr Kayode Fayemi of the Action Congress of Nigeria against his victory. Fayose said that the governor just feigned surprise at the advertorial because he was aware that he would either be sacked by the court or by the people through their votes.

He said, ' Oni has no case at all. He should not pretend that he is shocked. The INEC's advert is just a reminder of the ruling of the Federal High Court in Jos that Oni's tenure would end in 2011.

' His case is peculiar and it is a shame that he is afraid of election. He has spent close to four years and he is surprisingly afraid of an election. Either way, I am set for the election. If he survives Dr Fayemi at the appeal, I will sack him at the poll. I have told my people to begin to celebrate my victory in advance. I will return to the Government House in Ado-Ekiti as the governor in 2011.'

Also, the Action Congress of Nigeria in Ekiti State has described the comment of the INEC of the election time in the state as a welcome development.

The Director of Communication of the party, Mr. Yemi Adaramodu, in a telephone interview with our correspondent in Ado-Ekiti, said that although the party was okay with the INEC's comment on when governorship election would be conducted in the state, the party was optimistic that Oni would be sacked by the Court of Appeal before the election time.

Adaramodu said, 'We have an appeal against Oni victory at the court. He will be sent parking by the Court of Appeal before the election date. But the INEC's advert is confirming the ruling of the Federal High Court in Jos which said that Oni's tenure expires next year.

'There is no tenure elongation for Oni because it will be wrong to make him to benefit from his sins by elongating his tenure.'

However, the state Commissioner for Information and Civic Orientation, Mr. Taiwo Olatunbosun, while reacting to the electoral body's comment, said that the state government would not allow anybody to sneak into the Government House through the backdoor.

The commissioner said this in a statement made available to our correspondent in Ado-Ekiti on Thursday.

He said, 'There should be no contention on the issue which is a constitutional matter. The case is still in court for proper adjudication.

The people from my home town for example, would be disenfranchised if the governor was erroneously forced to vacate office next year as they voted for him to be governor in 2009. It would mean that he would utilise their mandate for only about two years.