INEC: A COMMISSION AND THE BURDEN OF VOTER APATHY 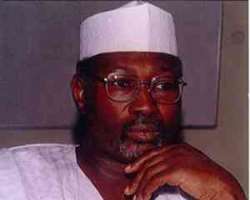 Attahiru Jega
NIYI ODEBODE writes that apart from providing materials for credible poll, the Independent National Electoral Commission must address, through voter education, the problem of apathy arising from past flawed elections

In January, Nigeria will hold another general election that many have described as a make-or-mar exercise. Last week, former president Olusegun Obasanjo tagged the January 2011 poll as 'operation totality' for the ruling party, the Peoples Democratic Party. This has been interpreted to mean that the party is desperate to win more states. There are concerns that the poll may be another do-or-die affair like the one held in 2007, which has been adjudged as the worst in the history of the country.

The 2007 elections were characterised by violence and massive rigging almost in all states. The flawed elections have resulted in apathy of voters who believe that country is incapable of conducting free and fair poll.

In 2007, the late President Umaru Yar'Adua, in his inaugural address, admitted that the election that brought to office was flawed. He promised to initiate an electoral reform that would strengthen democracy in the country.

Before his death, the late President made good his promise by setting up Muhammadu Uwais Electoral Reform Committee. The committee came up with many far-reaching recommendations, which were hailed by both the ruling party and the opposition.

Among other recommendations, the committee said the appointment of the Independent National Electoral Committee Chairman should be done by the National Judicial Commission and there should be financial autonomy for the electoral commission. Unfortunately, many of the recommendations are not in the 2010 Electoral Act signed by President Goodluck Jonathan.

But the President has repeatedly assured Nigerians of credible election. At a media chat on the Nigeria Television Authority, Jonathan described fraudulent poll as embarrassment to Nigerians. During a visit to France, he promised that 2011 elections would be credible.

'What I can promise Nigerians is that we will do everything possible to conduct credible elections. New laws will help us. We must develop a system of electing credible leaders. That will be the beginning of real development for our country. Without the ability to elect credible leaders, all our talk about rapid development will be a waste of time. We cannot have good governance without a good electoral system that ensures that elections are free, fair and credible,' Jonathan.

The appointment of Prof. Attahiru Jega as INEC chairman, has been seen as an indication of the President to fulfil his promise. For instance, a former Nigerian Bar Association President, Mr. Rotimi Akeredolu (SAN), had said that the new INEC chief has a high pedigree as an activist, adding that Nigerians were looking up to him to deliver credible elections in 2011.

Also, the president of the Academic Staff Union Universities, , Prof. Ukachukwu Awuzie, had also said, 'We are convinced that Jega, being a member of the Uwais Electoral Reform Committee, is knowledgeable enough to know our feelings. We also believe that he is a man of integrity. The choice of INEC boss is for the President; he has made his choice and we will support Jega.'

Besides government's efforts, many believe that there is need to educate voters to avoid the pitfall of the past. Some analysts are of the view that voters have not been sufficiently educated for the forthcoming poll.

The President of the Campaign for Democracy, Dr. Joe Okei-Odumakin, in an interview with our correspondent expressed concern that Nigerians had not been sufficiently educated for voter registration.

According to her, voter registration is the foundation of a credible election. She argued that if the country did not get the exercise right, the forthcoming elections might not meet expectations of Nigerians and international community.

She noted that voter education should not be left to INEC alone, adding that religious groups, the media and political parties should assist in enlightening the electorate to ensure credible poll The Edo State Governor, Mr. Adams Oshiomhole, who is one of the politicians calling for voter education, in an interview, said that Nigerians must be educated on the need to ensure credible poll through one-man-one-vote.

He identified multiple voting as bane of Nigeria's elections. The governor said, 'If you look at all the problems we have had, it is all about somewhat thumb-printing. If one man thumb-printed more than one ballot paper, then, that is what we call rigging. Or I wanted to vote and was denied the vote. Or, they cast one hundred votes and one thousand was declared. So, one vote equals ten. The heart of the electoral reform campaign, for me, can be reduced to one man, one vote. Or more appropriately, one person, one vote. I believe the presence of the Acting President represented by a state governor, who delivered a written address in which he renewed his pledge to the nation, I think, was most appropriate.'

With the nation approaching another general election, analysts believe that there is the need to solve the problem of voter apathy and ensure that all votes count through active participation of the electorate.