Day I was booed off-stage---Bowjoint 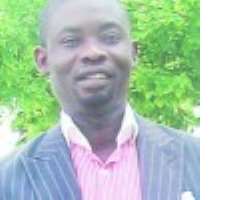 When it comes to the job of cracking jokes, comedy's rave of the moment, Bowjoint, is one comedian you cannot easily ignore. The Edo State-born humour merchant, going by his prowess and ingenuity in the delivery of jokes, is widely viewed as the next thing to happen to the comedy industry. The ever-smiling comedian appeared on the scene in 2000 after undergoing some baptism of fire. Ironically, he started out on a rough note when he was booed off the stage at an event. “I was invited for a show. I was to be paid after the show. During my performance, I couldn't connect well with the audience. I was booed off the stage with the shout of “E don do oooh. Dey go. Make you dey go, make you dey go, make you dey...” because I couldn't connect well with the crowd. I felt really so bad and totally embarrassed that day, that I felt I didn't deserve the money that I was supposed to be paid for the show”.

However, despite the initial setback, he went back to the drawing board, repackaged himself and came back better with determination. From that point, he has refused to look back, lapping up excellent performances everywhere he went. In an exclusive interview with National Life, the tall and handsome comedian recalls his journey into the humorous world of comedy, his style, his previous attempt and many more.
Excerpt

My name is Solomon Okoh. I am the first born in a family of five. I graduated from Lagos State University, Ojo, where I studied Industrial Relations and Personal Management.

You are a graduate of Industrial Relations and Personal Management. Why did you decide to abandon your degree for comedy?

Actually, my father wanted me to be a medical doctor, but due to the shape of things I couldn't aspire to be a medical doctor. So, I just examined myself and felt comedy is what I can do better. I have been in entertainment and have done a lot in entertainment. I was once into acting and presently into comedy. I also love music a lot. I just discovered that I can do well in comedy. After my graduation, there was no job so I decided to come into entertainment. Initially, I started doing acting and comedy together but not professionally. Acting didn't pay off. It was later I finally decided to settle for one, that is comedy and that was far back 2000.

In other words, joblessness or hunger pushed you into comedy?

I don't want to say it was joblessness. I was doing comedy before I started looking for a job. All of a sudden, I started getting some kind of favour. So, I felt I should forget about job hunting after all there are people that were working in offices and later abandoned their jobs for the entertainment industry. We have about one or two of such artistes.

If you truly discovered yourself to be good in comedy and you actually believe in yourself, why were you still looking for a job?

I was looking for the job and at the same time doing comedy, though not professionally. It wasn't as if I wasn't sure of myself doing comedy. At that time, I felt like looking for a job and that was when I just came out of school

Don't you think you will abandon comedy again if you get a good job which pays you well?

No, no, no. I can't abandon comedy anymore. I am not even thinking of working for anybody at the moment. When I was looking for the job, I was at the same time doing comedy. I felt anyone that comes first will deserve my full attention. So when comedy came, I decided to give it my full attention. I am benefiting from it and I felt since I am good at it and equally have the talent, let me give it a trial and I discovered that I am doing well. So, I can't abandon it.

Not even when you get a job that can pay half a million?

I can do a job within two weeks and get more than half a million. So that is the reason why I can't abandon comedy. For now, I don't think I can work under anybody. I believe the entertainment industry is very vibrant enough to accommodate everybody. There are one or two things that you can be good at if you try.

What was the first job you did as a comedian?

I can't even remember. I think it was when I got a call from a lady to perform at a particular function and at the end of the day I was given N10, 000 which happened to be my first pay.

But now you are worth more than a million?

Yes, by the special grace of God (laughs)

You said you were into acting. Can you give more details?

I was into acting after my graduation. That was early 2000. I acted in Law of Karma, Rejection, and some other flicks.

Did you play any major role?

That is the problem. I was given minor, minor roles, what they call waka-pass. The major problem was, I may be called upon to play a particular role but before you know it, the director or producer would give an excuse why the movie cannot be produced. The next thing, they will postpone it and that will be the end of it. You wouldn't see that movie again.

So how much were you paid for those waka pass roles?

Who were some of the actors or actresses you acted along ide with?

I acted alongside Charles Okafor, Ramsey Noah and some others who are no more in the industry. I have forgotten most of their names now. Another one is Desmond Elliot. He was still in UNILAG as a student.

If you were patient, don't you think you would have become a big star like Desmond and others by now?

Well, God knows best. When I was into acting, I still had so much love for comedy and I think that was really what I wanted to do. So I can't tell what would have happened. Maybe for certain reason, God diverted my attention from acting to comedy. I thank God for where I am today.

Do you have anybody that you consider a role model?

I don't take anybody as a role model. If you asked me which of the comedians I admire, then I will say so, so and so person. I admire good comedians. Well, I can say I have a role model in no one else than Alibaba. He is a good leader; he is somebody who has set the pace for others to follow.

Has Alibaba made any impact on your life?

Yes. There was one event I attended which I have even forgotten about it. Someone sent me to buy a newspaper for him. As I was going through the pages of the paper, I saw the person's letter of appreciation to people who made the event a success. There were names of governors, ministers, companies and surprisingly I saw my name and it was like, 'Waoh! Me too!' I didn't know that it was Alibaba that made it possible for me to be remembered. When I later saw him (Alibaba), I thanked him and since then I have not really had the opportunity to do him a favour. So, when he was putting up a show and he needed one of the stand-up comedians to support him, I just made myself available to him, though it wasn't me that he really called. He sent for my friend Koffi. So, it was Koffi that notified me.

Who are some of the comedians you hope to work with?

A lot of them like Koffi, Gordon, AY, Bash and some few other upcoming comedians. Others are artistes like MI, though I am yet to contact him.

How will you describe your kind of comedy?

I describe my comedy as a reality comedy. I want to use comedy to point out the real issues as they affect Nigerians and every one of us.

What inspire your kind of jokes?

I watch TV a lot like DSTV and I read newspapers a lot. The sad daily occurrences as relaid on TV and published in newspapers inspire my jokes. I just use my jokes to point out the evils and also call for change.

What is the highest amount you have ever been paid to perform?

(laughs) Ah! Na everything dem dey talk? That one go be latter. I no go fit tell you that one. Ah! Shuooo.!

Can you remember some of the events where you have performed?

I am singly married

Singly married! What does that mean?

That is why I say I am singily married.

Can you recall any ugly experience you have ever had with female fans?

I have had lots of ugly experiences

Can you remember a particular one?

Guy, na everything mouth dey talk? (laughs). There are times the ladies will come to you after shows and demand for your contact maybe out of appreciation for a job well done. It is very hard to turn down their request and by the time you give it to them, you are in trouble. Also, it's annoying when people call you on phone unnecessarily. They can flash you from morning till night and if care is not taken, you can run mad with their flashing.

What are some of the things you hope to achieve in the next few years?

I am not God. I don't want to start predicting several things. When I get to the bridge, I will cross.

Have you ever had any embarrassing moment on stage?

Every comedian has a bad day. There is no comedian that doesn't have bad day. I had an ugly experience in 2001 when I was invited for a show and I was to be paid after the show. During my performance, I didn't connect well with the audience. I was booed off the stage with the shout of 'e don do oooh. Dey go. Make you dey go, make you dey go, make you dey...' because I couldn't connect well with the crowd. I felt really so bad and totally embarrassed that day, that I felt I didn't deserve the money that I was supposed to be paid for the show.

At that point did you feel like giving up comedy?

Yes, I felt like giving up on comedy if not for the intervention of a particular lady who urged me on despite the embarrassment. I never knew I will get to this level