By I AM PR Agency 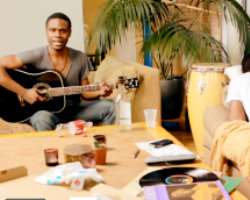 slated for release later on this fall.
Directed by Kristopher Rey Talley
Synopsis from the Director Kristopher Rey Talley: " I met Chris a ways back at a Moruf and Theophilus London Show. He performed an acoustic hip hop set with Moruf and it was taken aback by how nice and different it was to hear hip hop done in this manner; not to mention Chris' voice, which has a very genuine and relaxing quality to it. We talked after the show and after what ended up being months of back and forth talks, we began production for Radio. Chris wanted the video to feel like a good summers day. So to that end, the video has two Chris' in it.

Chris the performer, the narrator to this perfect day; and Chris the reality, the musician waking up from a night writing on the couch, to go out and play. Warm tones were employed stylistically, and aside from the effects in the beginning, I wanted the video to take a simpler turn, so that we could showcase as much as possible. Chris as a person and performer is very much like his music; intelligent, laid back and genuine. He was initially nervous and slightly twitchy on camera (as is the case with a lot of people on their first music video) but that was quickly removed within a day of shooting. So please enjoy this video and the amazing new talent it is showcasing. Let's hope the world can help keep the music alive. "