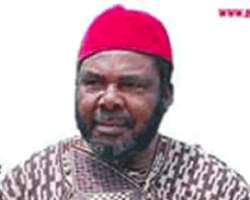 Edochie
This is definitely a clash of 'the Titans'. Nollywood veterans, Olu Jacobs and Pete Edochie are at loggerheads with each other. The genesis of their feud is an interview Edochie granted in which he claimed Olu Jacobs was destroying Igbo tradition with the way he portrays 'the Igwe' in his movies.

In another interview he granted another daily paper which was on the internet, Edochie said Olu Jacobs should not be playing the Igwe in any movie, because he doesn't understand the culture and tradition of the Igbo. When asked about Nollywood, the respected actor said 'The people who are making movies are children and most of them are unintelligent.

This is the reason why the role is not being properly interpreted. Have you ever seen a woman beside an Emir? But I watched a movie in which people had to help hold Olu Jacobs' wife in the movie and he basically raped her , because she refused to have sex with him and he was supposed to be the Igwe in the film. That is an absolute insult to the traditional stools of the Igbo people. If he knew better, he could have advised the producers of such a movie or should never have even taken part in it at all'.