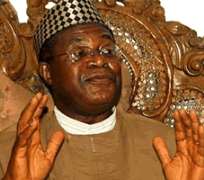 There was a fire outbreak this morning at the national secretariat of the Peoples Democratic Party (PDP), in Abuja razing the Conference Hall where the National Working Committee (NWC) meets every week and destroying drapes, furniture and a stockpile of documents, which were kept in the hall.

However, the timely intervention of men of Federal Fire Service, officers of the Nigeria Security and Civil Defence Corps and members of the public yesterday saved the party's National Secretariat from being completely razed.

Reports said the fire broke out from an air conditioner unit in the National Working Committee meeting room of the secretariat located at Wadata Plaza, Wuse Zone 5 Area of Abuja. A passerby who noticed the smoke reportedly raised an alarm, which fortunately attracted the attention of men of Civil Defence whose head office is located a few metres away from the PDP secretariat.

The Civil Defence officials in conjunction with other fire fighters who were precept at the time of fire outbreak and fire fighters were able to contain the inferno before it could extend to adjoining offices.National Publicity Secretary of the party, Prof. Rufai Alkali, said in a statement that the fire service personnel and members of the public contained the fire.

Alkali, in the statement, commended those he said saved what could have been a major disaster for the party.

In a press statement, the publicity secretary noted that, 'There was an outbreak of fire at the National Secretariat of our Party today, the fire started at the NWC meeting room on the second floor.

'From Preliminary reports, we learnt that the fire started from an Air conditioner in the hall. The quick intervention of the Fire Service personnel, Civil Defence Corps and staff of the Secretariat quickly contained the fire and stopped it from spreading.

'We wish to commend all those who moved in QUICKLY and stopped what would have otherwise become a major disaster,' the statement said.