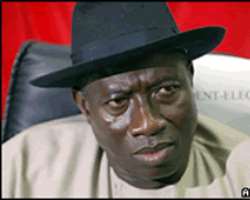 President Goodluck Jonathan
Governors elected on the platform of the Peoples Democratic Party (PDP) have demonstrated that they hold the aces on who would eventually clinch the party's presidential ticket for next year's election. Within the week, the governors have considered options, in deciding who would be the standard bearer of the PDP.

In their various meetings in Abuja, the PDP governors, in an attempt to solve the problem of the polarisation of the PDP along North and South line, owing to the perceived ambition of President Goodluck Jonathan and the declared ambition of former military president, General Ibrahim Babangida and former vice president, Alhaji Atiku Abubakar, had proposed to support one of their colleagues from the North for the PDP ticket.

Saturday Sun gathered that the governors considered the option, as they thought that, perhaps, a neutral aspirant, from outside the Jonathan and Babangida/Atiku camps, would be better for the party. However, the choice of which of the governors would be the lucky one became the Achilles heels. It was gathered that almost all the governors from the North are interested in becoming president. The narrowing of the choice to governors of Gombe, Niger, Kwara and Bauchi could not solve the puzzle, as each of them has strong supporters among their colleagues.

It was gathered the northern governors, who are interested in being president, have intensified lobby among their colleagues, a thing, which has also caused polarization of the PDP Governors' Forum, the same problem the governors set out to solve, in the first place.

Sources said that owing to the governors' perceived preference for a northern candidate, even if it is within their fold, this has bolstered the Babangida/Atiku camp to also lobby them for support.

The governors' other options
Sources revealed that while the governors have not been able to resolve who, among them, they would support, they have listed conditions on which they could support any other aspirant.

It was gathered that the governors, in the meeting held with the Jonathan camp as well as the camp of Babangida/Atiku, want an automatic ticket for the governorship elections next year.

Also, sources revealed, the governors want to decide those who would attend the staggered congresses that would pick the presidential candidate.

It was also revealed that the governors want one of them to be picked as vice presidential candidate in the elections.

Sources revealed that while the request for automatic ticket and choice of delegates favour Jonathan, the president has a problem with the one that has to do with the choice of vice presidential candidate. It was gathered that Jonathan wants to run with Vice President Namadi Sambo and his camp has been trying to sell this to the governors.

The argument of the Jonathan camp, in support of Sambo, is that he was a governor just a few months ago and should be seen as a friend of his colleagues.

Sources revealed that the Babangida/Atiku camp has also been lobbying the governors for their support. The camp, using Niger State governor, Alhaji Babangida Aliyu, as arrowhead, is believed to be ready to pick a serving governor as vice presidential candidate. However, the camp said it is not in any position to guarantee the governors automatic tickets.

Jonathan's worry
Sources revealed that the fact that governors have considered supporting one of them for the PDP ticket has jolted the Jonathan's camp. More worrisome to the president is the fact that the governors prefer a candidate from the North.

It was learnt that Jonathan is also trying to play on the sentiment that he was also a governor before becoming vice president and then president, to sway the PDP governors for support. Also, the president's camp is embarking on a zone by zone lobby, using governors from the South South. The lobby team, made up of South South governors, is led by Cross River State governor, Senator Liyel Imoke, with the support of Akwa Ibom State governor, Obong Godswill Akpabio.

Sources revealed that Bayelsa State governor, who has been embattled, with the rumour that the PDP may deny him second term ticket, is using his participation in the lobby to secure his own position. It is believed that the Jonathan camp is not sure of where Rivers State governor, Mr. Chibuike Amaechi, stands.

Jonathan, it was learnt, wants to be sure whether the governors would support him before making a public declaration on whether he would contest next year's election or not.

The North not relenting
Even as the governors are meeting, political bigwigs in the North are also working to ensure that a politician from the zone is picked as PDP candidate. Sources revealed that the plot to support a northern governor for the position of president was mooted by big time politicians from the zone, who are working with emirs and emirate heads.

The northern group working to stop Jonathan has spoken to Babangida and Atiku and them to work together. The recent declaration by Babangida and Atiku that they may forego their individual ambitions if that would ensure that power returns to the North, is an outcome of the meeting the northern lobby group had with them.

Sources revealed that Babangida and Atiku were asked to go ahead with their aspirations but to be ready to forego them if that would ensure that the North gets the PDP ticket, as first option or post of president, as the ultimate goal.

The northern group, it was gathered, has also left the option of using another political party to actualize a northern president ambition next year open. The plan is that if Jonathan gets the PDP ticket, the North would shift support to another political party that would present a candidate from the zone. It believed that Babangida and Atiku may defect from PDP, just to stop Jonathan.

The South East
While lobby is going on, it was gathered that the South East also wants to get something from any candidate it would support. Sources said that political leaders in the zone, including governors, are looking for concession for the South East to produce the president in 2015.

Babangida had offered to ensure that somebody from South East succeeds him in 2015, if he is elected president next year. Some Igbo leaders, who met with their northern counterparts recently, are favourably disposed to this.

As a counter measure, it was gathered that the Jonathan camp is also selling the idea that the president would only do one term and also work to ensure that South East produces the president in 2015.