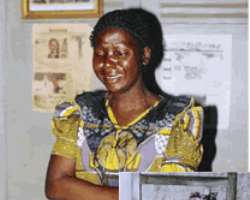 Mrs. Olaleye
Her name is Dansola Olaleye, a resident of Ibadan. Mrs. Olaleye is currently in trouble, as she has been docked in the Oyo State capital for deliberately dumping her six-month-old child beside a church at Olorunsogo area of the city.

After abandoning the child, Mrs. Olaleye allegedly took to her heels.

According to the woman, she could no longer care for the baby single-handedly, and so she decided to abandon her by a church.

But the motherly love between a woman and her child would not allow Dansola rest, apparently. Three days after abandoning her child, Mrs. Olaleye returned to the scene, seeking the baby.

Unknown to her, some public-spirited Nigerians had discovered the baby and had taken her to the nearby Agugu police station.

As she was searching for her, residents who knew that the baby had been taken to the police station alerted the police who promptly arrested the woman and took her to their station.

Dansola told Daily Sun that she abandoned the child out of frustration and hunger. According to her, the father of the child, whom she married for five years, had failed to perform the normal role of a father to her child.

She said her husband was a driver and that they were both staying in Lagos. 'He was not taking care of the child. Though we were staying in his brother's house in Lagos, at a stage, he ran away and I felt frustrated and came to my parents in Ibadan. When my parents and my husband asked about the child after I abandoned her, I told them that thieves had stolen my baby,' Dansola said.

She said the police arrested her when she came later to search for the child that she had abandoned three days earlier.

Speaking on the development, Divisional Police Officer, Agugu Police Station, Mr. Victor Olaiya, a chief superintendent of police (CSP) said residents of the area where the baby was abandoned reported the matter to the police. The child was then taken to the Welfare Centre in Ibadan, he said.

He said the woman was arrested three days later following a report that she was searching for an abandoned child. He further said that the police refused to accept her explanation that the child belonged to her.

Daily Sun gathered that the Social Welfare Officer later invited her husband, Mr. Seyi Olaleye, who confirmed that the child was his and that the wife had packed out of the house after a misunderstanding,

'Anytime I asked her about the child, she told me that the child had been stolen,' Olaleye reportedly told the Social Welfare Officer.

She ordered that though the child should be released to the mother Dansola, she must bring the child to the court every three months.

The case has since been adjourned till September 24, 2010.