THE U.S PULL OUT FROM IRAQ 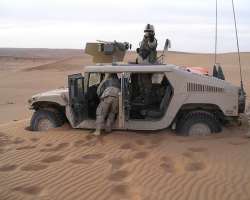 PHOTO: A US HUMVEE STUCK IN SAND IN SOUTHERN AFGHANISTAN. PHOTO: US DEPARTMENT OF DEFENCE.
Listen to article


The 4th Stryker Brigade, the last US combat unit scheduled to pull out of Iraq did so on August 19, marking a symbolic moment in America’s seven years and five months misadventure in Iraq and a fulfillment of President Barack Obama’s campaign promise that his administration will bring the boys back home. But what has America achieved? And has the war really ended? Many of the troops now returning home and a section of the American media have been claiming that America’s intervention in Iraq has been a huge success, but their claim is exaggerated. America’s intervention tagged "Operation Iraqi Freedom", has done no more than to expose the limits and the contradictions of American imperialism. The US may be the world’s supreme power but it is not omnipotent.

This is the lesson that America should have learnt in Vietnam, with over 50, 000 Americans, and millions of Vietnamese dead, it is the same lesson it is now failing to learn in Iraq and Afghanistan. America’s foreign policy is driven by the idea of American exceptionalism; by the dawn of the 20th century, a policy decision had been taken to ensure that America is the most powerful nation on earth. But the adoption of the role of an all-knowing Big Brother deploying mafia-like tactics have often put America into too many troubles for it is poorly cut out for the kind of colonial power role it is almost assuming in Iraq. America must be humble enough to admit its failure. The American Empire is a castle of contradictions.

When the coalition forces led by the United States stormed that country, in two wars that lasted ten years taken together, the ambition was to get rid of the Iraqi dictator, Saddam Hussein and to establish democratic rule in Iraq. The principle as defined in the US Iraq Liberation Act is "regime change." The Americans even boasted that the Iraqi populace will welcome them with flowers on the streets of Baghdad. That didn’t happen, rather the people were skeptical. The coalition forces got rid of Saddam Hussein in due course, a high moment in the expedition, and that was celebrated in the Western press as well as the subsequent elimination of the Saddam cabal, but all of that did not result in the freedom that the Americans promised. What has been proven in Iraq is that freedom as concept and reality is far more complex. Who should define it? The people themselves or outsiders?

The average Iraqi since 2003 has not been able to boast of Freedom. Iraq is virtually a failed state, with the average citizen facing serious challenges of survival and the collapse of social infrastructure: water, electricity and so on. Having removed Saddam Hussein, the Americans stayed back to help the Iraqis develop democratic structures, and perhaps there is much less violence now than hitherto. But not much transformation has taken place. Three elections have been held, the last in March 2010, but Iraq still does not have a functioning government. The local elite, political and the military, are corrupt, and they are sharply divided along sectarian lines: the Shia, the Sunni and the Kurds. They appear to be unimpressed by the lessons that America came to teach, ironically through the barrel of the gun. President George Bush once said that "It’s going to take a while for them to understand what freedom is all about." The general understanding of freedom in Iraq is that the people want to take charge of their own affairs without American supervision.

Indeed, the strongest source of unity in that country is the hatred of foreigners, hence the various suicide bombings and attacks on the coalition forces. America’s claim of supreme understanding, its claims of omnipotence, is primarily responsible for the wave of anti-Americanism that has increased since the war in Iraq and Afghanistan and the sabre-rattling with Iran. America’s long stay in Iraq has been at great cost to the ordinary people who have suffered many casualties and to the coalition troops and their families. The scale of the human tragedy far outweighs America’s objectives. As Americans receive the heroes and heroines of Iraq back home, the point cannot be lost that their country has had to pay heavily for its defiance of the will of the Iraqi people. The transformation of a so-called "humanitarian war" into a war of occupation speaks to the failure of policy and strategy. The exit from Iraq should mark the beginning of a review of America’s policy of engagement. Those who had predicted earlier that Iraq will end up as another Vietnam are vindicated.

There is much instructiveness in the following declaration by Geoff Morell, Pentagon chief spokesperson: "I don’t think anybody declared the end of the war as far as I know. There’s still fighting ahead." True, the exit of the last combat unit does not mark the end of the war, but perhaps not exactly in the same manner as Morell thinks. The United States is leaving behind 56,000 non-combat troops, 6, 000 of which are scheduled for exit by August 31, the remaining 50, 000 will stay behind, on a phased withdrawal basis till December 2011. With effect from September 1, the United States is proposing what it calls "Operation New Dawn," to be spearheaded by the State Department, and targeted at the reconstruction of Iraq and the assistance of the Iraqi army to take charge of national security. It is a mischievous proposition. America is trying to eat its cake and have it; having failed in Iraq, it wants to use "Operation New Dawn" to recoup its losses obviously. With Congress losing interest in further massive funding of the Iraq misadventure, corporate interests which drive American foreign policy are set to take over the initiative. This is the euphemism for the proposed new operation. It has been suggested that in the absence of Congress funding, Iraq oil resources will be used to fund the reconstruction process in collaboration with the Iraqis. This has been the primary interest, not Saddam, not the people’s freedom.

The truth however, is that continued US presence in one form or the other, may help to sustain US presence in the region and its interest in the balance of power in the oil-rich region, where it is still the most influential power, but it is not likely to give average Iraqis the chance to define their own freedom. The hope that the "New dawn" will end a master-servant relationship between the US and Iraq and create a platform for relations as two civilian democratic equals may not be realized. Operation New Dawn is therefore a face-saving strategy for continuing the same agenda by other means in the hope that it will be less costly, and that through it America can recoup some of its losses and ultimately win the war through the control of energy resources which is a major factor in global dominance. But there is a lesson perhaps to be learnt from "Operation New Dawn" as proposed, and America’s selfish interest. The pure logic of war is to win it by any means possible.

It is as much a matter of the human mind as it is of strategy. And flawed as the American example may be, there are lessons which Nigeria can draw from it. We also got involved in wars that we chose to fight, ostensibly on "humanitarian grounds" when through ECOMOG, the West African peacekeeping force, Nigeria invested enormous resources in helping to bring freedom to the people of Sierra Leone and Liberia in their fratricidal, civil wars between 199o and 2003. Nigeria left that adventure despite its huge deployment of funds to ECOMOG with nearly nothing. The British and the Americans arrived at the last minute to seize the glory. Nigeria did not get any diamond mines, and no Nigerian company was involved in reconstruction efforts in both countries. We also lost whatever mileage we could have gained in terms of image; today the average Liberian or Sierra Leonean has a low opinion of Nigerians even when in our case we were fighting a purely "humanitarian war." The grand result from the audit of Nigeria’s involvement in ECOMOG is that its soldiers left behind some 250, 000 children with single mothers. This is a classic case of how not to go to war, or fight it. Countries go to war to defend and promote the national interest. America may have lost the opportunity to control the Iraqi mind, but its post-combat reconstruction efforts may serve corporate America well.

There is also something in the Iraqi war about the power of public opinion. In the last elections in Britain and the United States, the countries’ continued stay in Iraq was a major issue with the populace condemning the adventure and the huge investment of taxpayers’ money in it. It was a factor in Labour’s loss of popularity in Britain. In the United States, President Barack Obama, on the campaign trail, promised to pull out the troops from Iraq. He has been consistent in defending that position and has delivered on it. That is leadership.

Nonetheless, "there’s still fighting ahead" in Iraq in the shape of more acts of terrorism, suicide bombings and attacks on foreigners occasioned by continued American presence. America’s exit is not likely to translate into any lowering of anti-American rhetoric. Perhaps the Iraqi people will consider more acceptable, a coalition of peacekeepers under the umbrella of the United Nations the objective of which should include bringing together the Shia, the Sunnis and the Kurds, and ensuring that political reconciliation in Iraq is as defined by the people themselves, not a foreign imposition. For too long, the UN stance on the Iraqi question has been ambivalent; it is time the United Nations played a more frontline role. Across the Middle East, there is a fanatic conception that democracy is a subterfuge designed to promote Western capitalist motives and interests. There is greater faith in Islamic principles even if the interpretation of those principles is conflicted. Any intervention is bound to be filtered through the prism of race and religion, except it appears neutral. The UN may guarantee such neutrality.

The biggest awakening in Iraq may be on the long run, the emergence of another Saddam Hussein-styled dictatorship, curiously wearing the toga of democracy. But whatever happens, the heroes (and sheroes) of the Iraqi war so far are the average soldiers on all sides who knowing little about the reason for the war nevertheless had a sense of duty to obey their commanders and go to the battlefield to kill the enemy. Even if a soldier knows the reason for war, it is not in his or her place to question the motives of his commanders. He goes to battle all the same, determined to lay down his life if need be. The other heroes are the journalists who reported the Iraqi wars. Many have lost their lives, or their limbs and thousands of families will remember Iraq as the killing fields, but the Army has been able to preserve its traditions, the media too, many of the young men and women in the frontline in Iraq deserve to be remembered and honoured for their bravery and patriotism even if the politicians got it wrong most of the time.