I DON'T WANT HER TO BE AN ACTRESS, BUT SHE ALREADY KNOWS HOW TO SMILE AT THE CAMERA â€“ LOLA ALAO 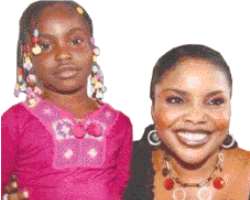 Lola Alao and her daughter
After waiting for a long while, the joy of Lola Alao was boundless when she gave birth to her daughter, Damilola. Now seven years old, both mother and daughter are inseparable. Does she miss the complementary role her husband should play in raising the child? Not quite, she says.

Lola is both mother and father to the child. In this interview, she explains why she is wearing both hats. Excerpts…

How does it feel to be a mother?
I don't know how to describe it, I can't describe the joy.

When you were still single, what was your dream of motherhood?

In my own case it was different, because it took me a long time before I could have my daughter. So that's why she means a lot to me. She is my life; she's everything I've got.

Why haven't you had another child?
I don't know; everything is in God's hands. Even my daughter keeps asking me, 'mommy when are you going to give me another baby'. She is my closest friend.

What was it like in the labour room?
You know what happened? Because I wanted the child desperately, when I went to the hospital, I told them that I wanted them to like bring her out, I didn't want her to have any problems. They told me it wasn't time for me to put to bed; they said I should wait for another week. I told them that I didn't want to wait and so they brought her out and I thank God that she is alive today.

When they were doing the C-section were you conscious?

Yeah! I was looking at them.
Can you recall what happened?
Immediately they brought out my baby, they injected me and I slept off, I knew when they brought out the baby. I knew when they were cutting the umbilical cord. I remember that the doctor told me that we had to save one life and I told him not to bother to save any, that if my baby was not going to be okay, there was no need for the doctor to save my life. Because I was 33 then, I needed the child desperately.

Why were you so desperate to have a child? What's the big deal?

The big deal was that now I have somebody that is my own, somebody I brought into this life. You don't understand that's the big deal; that you are not barren. That you can even bear a child; that you have your own blood. You know your husband can divorce you. Anybody can say I don't want you again, but you have your child. She's your child any day, any time.

Was your husband in the labour room with you?
No, he was in Jamaica. I didn't even tell anybody. The only person that knew that I had my baby was Bukky Wright and she was the first person to carry her.

The first time they put the child into your hands, how did you feel?

I was so happy. They put her on my chest and I was very happy, I can't explain the joy, I was very, very happy. I felt fulfilled.

So what names did you give her?
Damilola and Lola. Lola is from me and Damilola is from her father because her father name is Damilare. The grandfather named her Omowunmi, so we call her

Omowunmi. Bukky Wright named her Praise.
How old is she now?
She turned seven April 4th, this year.
What's it like raising the child alone here in Nigeria?

I'm not raising her alone. My mum is here, and so are my aunties, everybody is around.

But did you understand what I meant by 'alone'?
Without the father, that is? It doesn't matter because I'm not always at home. I'm not feeling it. Do you know why? Right from day one, her father has been in America, and I've been here. It has just been the two of us and my family, so I don't really feel alone.

But people say it is healthier that both parents raise the child. What's your view?

Even when the father is around, it doesn't make any different since my daughter is always with my mum. My mum lives with me.

Are there times she feels your absence ?
Yes! Because I've not really had time to take her out of the country. I'm planning to do that now.

Has she ever been naughty?
Yes. She ate at a stranger's house and I gave her a mark in her hand and I'm sure she will never do that again. She came back and I asked have you eaten and she said 'yes'. I asked where and she said 'at my friend's house' and I was so angry.

So why were you angry?
Why should my daughter eat in somebody's house?
I thought when you were growing up, people ate in anybody's house?

I don't want my own daughter to be like that, omo kan ma la pe, oju kan epe.

Apart from love, what is the biggest gift you've bought for her?

I buy her gifts everyday. I buy her clothes, everything she wants, everyday. I don't really have anything special because everytime I go out, if she says she wants this I buy it for her because she is my only child. Why am I working if I can't give her the best of life?

People say we only have men who can father a child, that we no longer have fathers in the real sense of the word. Do you share that sentiment?

Truly that is a fact. Honestly. It happens all the time. Most men, especially when the marriage has broken down, they just forget the child and all that. It happens.

But what do you think is the remedy?
It's in their blood. There is nothing you can do about that. But there are some women like that too who would abandon their children and go away, but I can't do that. Do you know why most men do that? They believe they're punishing their wives, but it's not true. It's only an irresponsible man that will reject his duties, because iya ti baba ba feran, omo na ni o ma feran.

You understand? It's all lies, I just see that as irresponsibility. That's why I respect Will Smith. He's not married to his first wife any longer but he cares about the children. That's a man I respect so much. You can imagine children saying my daddy is this, my daddy is that and your own child cannot say that about the father and you say I wish my daughter can say this about her father. I don't know some men are just irresponsible.

But does your child miss her father?
They are very close. They talk all the time.
But what about you and him?
Well still talk to each other.
But doesn't your child say 'I wish I can hold my daddy's hand'?

What are those moments you and your daughter share alone?

Okay like in my house, she has her room but we sleep together and we are very close and we have names we call each other and we go out together. We do many things together; on location, I'm always with my daughter.

Has she ever had a reason to disagree with you?
Yes! If she says she wants this and I say no she will say, mummy I want it today.