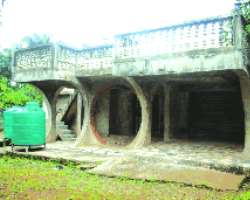 Uburu paints a perfect picture of a rural setting. It is a community, where nature competes with modernity. Here, houses hide behind and between trees and shrubs to create a beautiful atmosphere. Indeed, it is a community short on the troubles and complexities of city life.

Found in Ohaozara Local Government Area of Ebony State, Uburu is popular because of the large deposit of salt in the area. In fact, during the ill-fated Nigeria/Biafra civil war, between 1967 and 1970, it produced the salt with which the latter combated the ravages of kwashiorkor, occasioned by the blocking of essential items from entering into the secessionist republic by the Federal Government.

However, the tranquility that characterises the community was, interrupted on June 10.

And it is doubtful if the community would ever remain the same again. In the early afternoon of the fateful day, lorry loads of a combined team of soldiers and policemen descended on the community. Armed to the teeth, they looked menacing. Their look was a portrait of men on a difficult assignment, portrait of courage and professionalism. Fear-stricken natives scampered into their houses and shops, as the security men took positions. It was, indeed, like a war situation or a scene from a war movie.

Saturday Sun had exclusively reported that 'when the gang attacked on December 10, it could not gain access to the bank's vault. The robbers, armed with AK 47 and other sophisticated weapons, ran amok, hence they opened fire on villagers in the heart of the community. In the process, they killed eight people. The case of one of the victims, Miss Nkechi Eze, a 20-year-old student of College of Education, Ikwo, was pathetic. The robbers blew off her head.'

When the June 10 shooting ended and the smoke cleared, the true picture of the event unfolded. It was not another attack by a gang of dare devil robbers. What happened was, indeed, a showdown between government and kidnappers, who had made the community their detention and torture chamber.

Recalling the incident, the Traditional Prime Minister of Enu-Uburu autonomous community, Chief Sylvester E. Odi, said that the exchange of gunfire between security men and kidnappers threw the natives into pandemonium, confusion and fear. He added that they were shocked to learn that the community was a den of kidnappers.

Chief Odi said: 'It was a very surprising and shocking incident. We are a peace-loving and law abiding community, not knowing that people had made our place a haven for keeping kidnapped victims. On that fateful day, we woke up and saw 16 vehicles of military personnel, each loaded with arms. We were thinking that there was war between our community and the neighbouring community, but we didn't know that security personnel got information that there were kidnapped victims held in Uburu. The kidnappers had held them for more than four days without the knowledge of my community.

'But as God would have it, the security men had to go into action to rescue the victims. Fortunately for my community, those involved were even coming to find out if the ransom had been brought. The victims are from Enugu State; we didn't know them; we didn't even know they were being held captive in our community. We only got to know what happened when the security men condoned off the area. Fortunately again, it was one of our sons who they lied to with the story that they had goods, who quickly contacted the State Security Service (SSS) and they contacted other security agencies.'

Chief Odi added: 'When the security men arrived, the kidnappers opened fire on them, but the security men were precautious because they did not want innocent people to be caught in the crossfire. At the end of the day, it was realised that an Uburu boy, known as Pedro, masterminded it. It teaches us that any calamity that befalls a community, her son or daughter must be involved. The people connected are not from Uburu community, but those who led them are members of the community.'

In the same vein, an indigene of the community, who identified himself simply as Nwabueze, said that the people were living in palpable fear because they do not know if there were other such chambers in the community or if the fleeing kidnappers would launch a reprisal attack on them.

It was also gathered that indigenes of the community have fallen prey to kidnappers. For instance, the mother of the Ebonyi State chairman of the PDP, who hails from the community, Engr. Dave Umahi, was kidnapped not long ago. An unspecified amount of money was said to have been paid as ransom before the old woman was released.

Inside the den
The 'kidnappers' den' is a modest bungalow located at Onuogborozi, Uburu. Unoccupied and hidden behind trees, it is owned by an indigene said to be studying abroad. Sparsely furnished, it has about six bedrooms and living rooms, which the kidnappers converted to their operational base. While their victims are usually chained and blind-folded, the kidnappers bring in a few essential needs, like food, hot drinks and marijuana. The road leading to the house is dirty, narrow and bumpy. Indeed, the location is suitable for the evil enterprise.

An unconfirmed report claimed that apart from the brother to the Secretary to the Government of Enugu State and a businessman, who were rescued during the June 10 operation, other kidnapped victims might not have been ferried through the route.

When Saturday Sun visited the 'kidnappers den,' part of the building was riddled with bullets, even as the glass door was shattered. It was the evidence of the battle between the security men and the kidnappers.

Modus operandi
Investigation revealed that many of the kidnappers keep the victims in unoccupied or uncompleted buildings. Sometimes, they do this in connivance with those saddled with the responsibility of taking care of such buildings while their owners are away. For instance, policemen recently killed five members of a gang of seven kidnappers who specialize in keeping their victims in the Ideato, Imo State country-home of a Lagos-based businessman.

A source, who craved anonymity, said: 'When we noticed unusual movements in and around the house of one of our illustrious sons, we notified him and he returned without notice. When he came back, he reported the matter to the police and they stormed the house. Five of the kidnappers died in the shootout with the police while two were apprehended. The house was made available to the kidnappers by the gateman, who was usually rewarded for his co-operation.'

It was further learnt that a similar scenario played out at Nwangele, in Imo State recently. But the operation to dislodge the kidnappers was, however, disastrous, as two of the policemen went down. The kidnappers had laid ambush for them and caught them off-guard.

Jungle experience
Saturday Sun investigation revealed that many of the kidnap victims do not enjoy the luxury of being kept in a house. Some of them are chained, like dogs, to trees in the forest without shelter over their heads. So, whether the sun is shining or it is raining, they remain in the open air without food and water for as long as it took their relations to raise the ransom.

Mazi Chima Ibeh, a businessman, who was kidnapped from his residence in Aba, Abia State recently told Saturday Sun that he was chained to a tree in the forest without water and food for five days, even as he was blind-folded all through. He said that his relations paid one million naira for his freedom.

He said: 'When I was taken away from my house at gunpoint that fateful night last month, I was forced into the booth of their car, an SUV. They drove me to a forest, where I was chained like an animal to a tree. I was in that position for five days, while still blindfolded. And each time their negotiations with my people did not go well with them, they will use their cutlass to make lacerations on my body. I was cut at the ankle and back and I bled without treatment whatsoever. They even threatened to kill me and sell me in parts, if my people did not raise the ransom within seven days.

'At a time, I was even praying for death, as I had been tortured beyond measure. To make matters worse, I was putting on only shorts at the time I was kidnapped from my home. When my people made the payment on the fifth day, they dropped me at Akpa, in Obingwa Local Government Area of Abia State. It was about 9p.m. They gave me a female dress, as I had no shirt on my back, when I was kidnapped. Because I had been blindfolded for five straight days, I could not see clearly. My eyes were blood shot. I couldn't stand properly. I was bent like an old man.

'I spent two weeks at Living Word Hospital, Umuocham, Aba. I moved with the aid of a walking stick for several weeks. Right now, I still feel tenderness in some parts of the body, where I was beaten with a cutlass.'

Ibeh added that he has been compelled to abandon his residence for a rented apartment because he still nursed fear that the kidnappers could stage a come-back.

Kidnappers' paradise
Indeed, the kidnap business is flourishing in Obingwa and its environs. There, they have different leadership. And with each passing day, more gangs are springing up.

Saturday Sun gathered that some of the operational tools of kidnappers, particularly guns, are manufactured in the Obingwa axis. The Abala community is said to be the major manufacturers of guns. Not long ago, a team of policemen pursuing armed robbers were ambushed in Abala and five of their six vehicles burnt.

Kidnap victims are also kept in the forests at Edda, Ebonyi State; Nnewi, Anambra State and Ikot Ekpene, Akwa Ibom State, among others.

Police and bankers involved
It is believed that policemen aid and abet kidnappers. Only recently, the Inspector General of Police (IGP), Ogbonna Onovo, accused his men of complicity but he certainly does not know their level of involvement. Take this: After a Port Harcourt-based businessman reported the kidnap of his father at a police station in Imo State, the kidnappers called him and told him the content of his statement. It happened barely 15 minutes after he made the complaint.

Bankers are also involved. Indeed, as the kidnaps business booms, kidnappers are networking with other professionals, such as bankers who supply information on the bank balances of their customers for a fee. With such information, the kidnappers will stalk their victims and strike at the appropriate time. And when they do, they tell the victim the exact amount in a particular account of a given bank.

To be on the safe side, many businessmen now operate multiple accounts, where they split their deposits, so that none of the accounts will maintain a heavy balance at any point in time.

Chief Omaka, a victim, said: 'I was surprised when I was kidnapped and the kidnappers told me the exact amount of money I had in my account, with one of the new generation banks. It was too much for me to bear. It simply meant that they had inside information about my financial transactions. It meant that they are working in concert with bad eggs in the banks.'