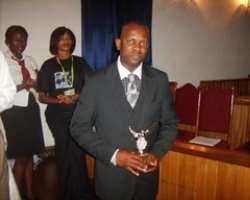 Isaac Izoya has described President Goodluck Jonathan as a strong believer in the rule of law who will advance popular democracy in the country. The Germany-based Nollywood actor and producer appealed to Nigerians at home and abroad to support the president at next year's election for “continuity in national leadership and for the sake of national stability”.

Izoya, a prominent promoter of Nollywood in Europe, was speaking last Saturday at a historic meeting in Frankfurt, where Nigerians across Europe gathered to deliberate on the state of the nation. The impetus for the meeting is the ongoing zoning debate in the run-up to next year's election and the issue received most of the attention at the meeting.

Izoya, who is also the P.R.O. of the Edo Community in Germany and founder of the founder of the Association of Ishan People in Germany, praised Jonathan for the careful way he's been handling the affairs of the country since coming to office.

Izoya, past recipient of NOPA and KAMA awards, warned against complacency among the youths in Nigeria. “Our youths have to be more politically engaged. They must not fold their hands and allow those that misled the country in the past to return to power to ruin their future.”

In his keynote speech at the event, Femi Awoniyi, the publisher of the Europe-wide circulating magazine The African Courier, condemned the zoning debate for being “akin to Nero playing the fiddle while Rome burned”.

“The immense challenges facing the country - lack of basic physical infrastructure needed for any meaningful development, mass unemployment and widespread poverty and human suffering in the country - should dominate election campaign and not an issue that the constitution is clear and unambiguous about,” he said.

The magazine publisher also noted that the zoning debate “unfortunately” promotes a public perception of government as “an agency for self-enrichment” and not as an institution that is primarily responsible for the welfare of the citizens. “This kind of debate promotes corruption in the country,” he added.

Awoniyi said the zoning issue also shames Nigeria not only in the West but also among our fellow Africans. “What this debate does is to convey the impression to the outside world that Nigeria is a failed nation, which after 50 years of independence could not create a sense of national solidarity. We are telling the world that there is utterly no sense of common destiny, of belonging to the same nation in Nigeria and we inadvertently support the position of many in the international community that Nigerians would be better off if their country were dismembered.”

While expressing understanding for the sentiments of the zoning advocates, the media entrepreneur said their agitations however “undermine the very essence and philosophy of multi-party democracy.”

“How do you rotate power among more than 200 ethnic groups?” Awoniyi asked. “We should stop promoting backward policies that drive wedges between and among Nigerians and rather concentrate our efforts on nation-building and the improvement of the well-being of our people.”

Awoniyi paid glowing tributes to President Goodluck Jonathan for the manner he's been running the country since assuming office. “The way he managed the transition of power makes him a credible candidate for the Nobel Peace Prize,” Awoniyi said to loud ovation.

He said that Nigerians should count their blessings for having a 'Vice President Goodluck Jonathan' at that delicate period of our national history. “Some other less thoughtful politician would have acted rashly and plunged the country into deep crisis. His strong faith in divine disposition, his staunch belief in this community of fate called Nigeria and his Mosean humility saved us from perhaps a major tragic conflict.”

Awoniyi also praised the actions taken by President Jonathan since assuming office, among which is the appointment of an illustrious citizen like Professor Attairu Jega, a man who enjoys the confidence of most Nigerians, as the chairman of INEC.

In his speech, Ajibola Antonio, the former president of Afenifere International Europe and founder of the Egbe omo Oduduwa in Germany, said it's important for the country to get its act together and face the challenges confronting it. He said Jonathan, through his unique experience in governance, having risen from Deputy Governor to President, was well suited for the office of president and would provide the country the right leadership it requires.

Antonio, a prominent member of the Nigerian community in Germany, called on his countrymen and women abroad to pay more attention to what is going on at home and offer their views. “This will avail our homeland of the benefits of our education and exposure.”

In an emotional speech, Shakiru Kolawole Oladunjoye, a grandson of the legendary pre-Independence Yoruba politician Adegoke Adelabu, cited the many ills besetting the country and why the situation should not be allowed to persist. “After 50 years of independence Nigeria has not recover from that "peculiar mess" that my grandfather talked about,” he said to loud laughter in the audience. The German-trained telecommunications engineer praised President Jonathan for showing “unprecedented leadership” during the delicate period of the late Yar'Adua's illness. Oladunjoye appealed to Nigerians to give Dr. Jonathan the opportunity to build a functioning government based on common sense and the profound principles of democracy.

In his own presentation, Yomi Awosanya, called on INEC chief, Prof Attairu Jega, to live to the expectations of Nigerians, “who welcomed his appointment with much enthusiasm”, by conducting credible elections next year. The Germany-based political scientist said all the aspects of the electoral process from voter registration to the announcement of polling results should be transparent. “Only credible elections can legitimatise those elected,” he added.

International lawyer and author of the best-selling novel Illegal in Berlin Charles Chukwuma Ofoji, said Nigerians were expecting the Diaspora to play a very active role in the democratic development of the country. “And we should not disappoint our country,” added Ofoji, who practises law in Germany and the UK.

A message of solidarity from John Abizon of the Ijaw Solidarity Group Germany was also read at the gathering.

“With the inauguration of this Coalition today, we end the loud silence of the Diaspora on critical national issues and reclaim our inalienable rights to participate in the affairs of our homeland,” a statement issued at the end of the meeting said.

The meeting mandated Awoniyi to “build a constituency of Nigerians in Europe to support the election of President Jonathan next year”.

Forward Nigeria! said in the press statement that its main goals were to promote peace and unity in Nigeria. It would contribute to public discourse to promote good governance, sustainable economic development and the eradication of poverty in the country.

The group said it decided to support Dr Goodluck Jonathan because “he has shown that uncommon leadership quality - of putting national interest above personal interest - in a most trying period of our history caused by the unfortunate long incapacitation of the late President Umaru Yar'Adua.”

The Coalition said the president's style of consulting as widely as possible before making a major decision affecting the country also marks him out as a leader who will be fair to all Nigerians irrespective of their religion, region or ethnicity.

Moreover, “Dr Jonathan's sound educational background stands him in a good stead to grapple with the complex issues of development in the country,” Forward Nigeria! said.

“None of the other politicians who have expressed interest in the presidency next year possesses any of these qualities,” the Coalition said. “Our support for Dr Jonathan is therefore based on the conviction that he is the best candidate.”

Forward Nigeria! said it would, as the occasion arises, provide through its expert panels, useful information and thoughtful analysis on development issues to policymakers in Nigeria.

The Coalition called on Nigerian politicians to enthrone the principle of justice, equity and fairness in their actions – both in political office or out of it. The group expressed its firm belief in democracy “as the most reliable guarantor of sustainable unity, stability and development in Nigeria.”