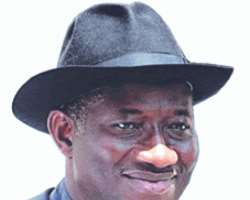 Jonathan
'It is a good thing the (PDP) BoT (Board of Trustees) and NEC (National Executive Committee) did not endorse President Goodluck Jonathan. The party is trying to please all the sides. But the truth is, if we agree that Jonathan is part of the Yar'Adua-Jonathan ticket, which no one is disputing, the question many of our people in the North will soon ask is: Is Jonathan the correct person to finish the eight years that Yar'Adua should have spent, especially when it is feared that the position will go to the South in 2015? I fear the PDP would still have to answer that question at some point.'

These were the words of a northern member of the National Assembly who was uncomfortable with the position of the PDP NEC to allow Jonathan to contest the 2011 polls, despite deciding that zoning stays.

Instructively, an aide to one of the governors of a Southern state said: 'Jonathan could be in trouble because he is carrying an elephant on his head and using his feet to look for ants. He should have known that reform and presidential ambition cannot mix. He should have secured the ticket first and then do what Obasanjo did after securing his second-term ticket, who started showing his hands. Now Jonathan has shown his hands and the governors are alert to what is coming.'

On the ambivalence of the PDP leadership, the aide further said: 'What we are offering the North is a bitter pill they would not swallow. Can the South accept what it's offering the North? If Yar'Adua had not died, would we have killed him? Well, let us wait and see.' Clearly, the ambivalence of the PDP leadership over the vexed issue of zoning is generating heat inside and outside the party and is said to be making Jonathan hot behind the collars.

Another lawmaker, a Senator from the South, told Sunday Sun in confidence that the President may have written his name in the governors black books, with the way he has carried on since he came into power.

'He (Jonathan) carries on as if the governors don't matter, and we all know they do. He should not expect them to fold their arms while their second term ambition disappear into thin air. If the President is not careful, the PDP might as well get ready for a fight-to-finish. The governors are already looking beyond the party primaries and that is a bad omen for the PDP,' the lawmaker said.

On another front, Jonathan is said to have cut a deal with the governors over the controversial issue of e-registration of party member. The PDP governors had complained that the move would whittle down their influence and may even deprive some of them their second term tickets. They were said to be ready for a showdown until the NEC saw the handwriting and suspended the plan.

A source however claimed it was not as smooth as it sounded before the issue of e-registration was suspended. A governor's aide spoke of a stormy meeting where some governors 'expressed their mind and warned that they might be unable to assist the President unless the e-registration idea was dropped.'

Former Senate President, Ken Nnamani, however, sees nothing amiss with the positions of the party's BoT and its NEC. Said Nnamani: 'What the two bodies – the BoT and the NEC- said are the same. They are saying that zoning remains a part of the PDP position sharing arrangement, but that the incumbent President is free to contest because of the unique circumstances through which he became President.

'If Yar'Adua were to be alive today, we would not be talking of zoning because they would have been allowed another term in office. What they are saying is zoning did not die with Yar'Adua and that is why they said that the Yar'Adua-Jonathan ticket should continue and by 2015, the position of the President would revert to the South.'

According to the former Senate leader, 'those canvassing against zoning are missing the point. The issue of zoning is universal; it is to ensure peace, stability and equity. If there was no zoning, the secretary general of the United Nations would not have come to Africa. Now it is in Asia and so it go would round till it comes to Africa again.' A member of the BoT from North Central however saw the decision of the PDP NEC as victory for the North. He said the latest position of the leadership was better than the national chairman, Dr Okwesilieze Nwodo's initial position that zoning in the party was dead.

'It is victory for some of us who want the issue of zoning retained. It is a step forward. We will tackle other issues as they arise but it is important that the party restated it that zoning stays.' The member, who noted that northerners were not against the President, expressed deep concern with the manner Obasanjo was handling the matter.

'We have nothing against Jonathan as a person but his sponsors are not helping his matter at all. They have alienated everybody that would have been of help to the President. Obasanjo was the first beneficiary of zoning but he declared zoning dead and that has alerted other members of the BoT to what some people are planning. Let us wait and see how far they can go,' he said.