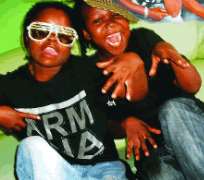 Gary Coleman who starred as Arnold Jackson in Different Strokes was one of the first actors who remained like a child even after attaining adulthood. When Chinedu Ikedieze, a graduate, and Osita Iheme, aka Aki and Pawpaw, who are in the same condition began playing the roles of mischievous kids in Nollywood, they took Africa by storm. Today, they are among Africa's most popular actors.

Right behind them, two new stars are beginning to emerge. Salt and Pepper are also stunted like Aki and Pawpaw, and they have played several roles in movies. Like the first duo, these two are over thirty, but look like 10-year old twins.

Prince Murphy, who goes by the name Salt is a graduate of Delta State University and holds a degree in mass communication. The Urhobo-born singer and actor, alongside his colleague Pepper, has acted in different comic movies including Salt and Pepper (which gave them their names), Bless my Soul, Mental Case, The Talisman, Golden Jewel and Super Striker.

Wilson Ikem, the other, is a graduate of Institute of Management Technology (IMT), Enugu. Although he began acting two years before Salt, it was not until they met that they really began to make waves. He has been with Pepper in all the movies, but with Monday Diamond in his comedy train both in Lagos and Akure, they have also done comedy performances, apart from being in the 2009 edition of Guinness Tours at Ikom. I this interview with Sunday Sun, they reveal their achievements, dreams and goals. Excerpts:

How did you find your way into entertainment?
I started way back in school. I studied Mass Communication at IMT Enugu. It was in 2006 when the late Ebere Onwu, producer of the movie Salt and Pepper brought us together at Enugu where we featured as Salt and Pepper. Since then, we have been acting and living together. We have acted in movies like Recharge Card and we have been in Guinness Tours.

How long have you been an entertainer?

Over eight years now. I started before I met Salt (Prince Murphy). We were in Enugu but we plan to move to Lagos as the capital of entertainment in Nigeria and we hope to really begin making waves around here. It's all about hard work and more hard work and of course, connections. Aki and Pawpaw did not get there at once, they needed a lot of hard work and God blessed them. We are trying to emulate them and God willing, we will become as good.

Is there anything you are working on at the moment?

We are also musicians. Right now we have an album on its way. It's called Iyo. Watch out for it.

Did you realize you were not going to grow as a child?

I did not know, but when my mates kept growing bigger, and my younger ones getting bigger too, I knew something was wrong. Then I saw Aki and Pawpaw on TV and said to myself “There are other people like me o, and they are not growing like me too!” Then I said to myself that there is no problem. If I don't grow, at least I will grow in wealth. I can't lose both ways.

You are probably not married yet?

No, but I have a couple of girlfriends.

Yes, I have plenty of them.

So how do you handle them? (Here, the reporter had meant handling them in terms of number but the response was in terms of sexual satisfaction!)

Ah, the way men handle women. In fact they even ask for more of it. But I'm careful not to take too many of them for the sake of my health.

So how soon are you thinking of getting married?

I'm not thinking of getting married soon o! I will like to enjoy my life before marriage.

Do you mean that marriage is not enjoyment?

Not that. I mean I don't want to hang my boots yet. When you get married, it means you have packed inside.

Is there anybody in your bloodline who has the kind of condition you have?

Nobody at all. In fact, doctors we have consulted said there is nothing wrong with me.

What about your girlfriends? Is there any like you?

They are as big and tall as you are . (Referring to the reporter) My younger brother is just like you. I guess he is about your age too.

How did you become an actor?

I started when I was in SS2. I was eager to act, but my parents did not allow me until I graduated from university. I studied Mass Communication at DELSU (Delta State University).

So after school they now decided to allow you do your thing?

Not really. I took the bull by the horns myself. I took to acting myself and right now, they fully support me.

So when did you realize that you are different from other people?

At 13. I felt really bad when it became too clear that I was not catching up with my mates in terms of size. They all mocked me . They handled me as if I was a mere toy. I tried to cope but it was not easy. But today things have greatly changed. People have learnt to respect me.

Why do you think they decided to change?

I think it's because I am a tough person. I made it clear to them ,that I'm not to be treated like a piece of crap and people see it and “maintain”. I think they are also beginning to realize I have become a person to be reckoned with and respected .

In your days as a child, did you ever see yourself becoming popular?

Not at all, but in 2006 after featuring in that movie Salt 'n' Pepper, it became clear that I was headed for greatness. I nursed the ambition to act but I was in the village after my degree exams. The village won't give you anything, so I left the village on my own. I never knew anybody here before, but I knew God is with me. Back in the village, I used to hear of National Theatre and when I came to Lagos, I headed there straight. After one month, I had played my first role as Salt.

How humble was your background?

Humble is understatement, my background was kpako. But at that, we could afford three meals a day and my parents were able to pay my school fees. I'm not as poor as I used to be back then. God has really been wonderful and we are moving on well.

What's the disposition of your people to you after the success of Salt 'n' Pepper?

The respect they had for me increased 100 percent. They started accepting me as a star, especially my mom. She could not help being proud of me, following what she passed through having a child like me.

When do you hope to get married?

As soon as I get rid of the name ladies call me, “I love you”.

Why do they call you that?

I guess it's because they think I am handsome and also the way I handle them.

You mean you handle them well in bed ?

It's not a big task. It's a simple thing every man does.

Are you saying that when you handle a girl, she screams for more?

She does not scream. She just asks for more.

In your bloodline, has there been any case of stunted growth like you?

No, but people keep asking why I'm the only one in the whole family. My twin sister is big, not like me at all. So I believe that my being like this is for a purpose.

I have seen them o, but I don't go close to them. They are not my taste. If I'm like this, I definitely want to get married to someone who is big. If I marry a stunted person like me, don't you think there is bound to be a problem with our children?