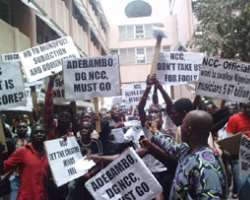 “There is no preferential treatment. This is a government that does not believe in cartels and would not encourage monopoly” were the words of the AGF, Mohammed Adokie (SAN) that sent members of the MCSN into a jubilating mood at the Federal secretariate in Abuja last Thursday.

The MCSN members numbering more than 700 and led by two former PMAN presidents (Charly Boy and Tee Mac) and Vice presidents, (Orits Wiliki and George Durueke), Kenny Ogungbe, Frank Kuboye, Solomon Arueya, Yinka Davis and Big Lo had in the early morning of Thursday laid siege on the Federal secretariate to protest the registration of COSON, a body that has two NCC directors on their board, as the sole CMO in the country.
.
The demonstration which took the peaceful Abuja community by surprise, kicked of with the placard carrying musicians paying an unscheduled visit to the AIT Station and finally pitching at the office of Nigeria's Attorney General.

Interestingly, while the Nigerian Copyright Commission which is under the Ministry of Justice shut its doors to the protesting musicians and the DG, Professor Adewopo absent, the AGF was on hand to receive the protesters.

While waving the olive branch, a seemingly troubled AGF, Mohammed Adokie commended the musicians saying “I have listened to your grievances, but let me first thank you for the peaceful and orderly manner which you have channeled your case. I also want to assure you that this is a government that believes in protecting the right of its citizens in every organization and association. All of you are equal before the law.

He took it further adding “ There is no preferential treatment. This is a government that does not believe in cartels, monopoly and would not encourage monopoly. We want Nigerians to get value for money in whatever activity and whoever is going to be a stumbling block; we would axe or fire.”

And as the musicians clenched their fists and offered three Gbosas to the AGF, the Senior advocate pointed out that “those who know me, would know that I don't sit on the fence, I've listened to your grievances and I want to tell you that I identify and solidify with you.

I will be going for an official assignment in United State of America and will be back on August 14. And as soon as I get back, I will address this matter once and for all.”

As the demonstrators listened, the AGF stopped briefly to take a call, which he explained to his audience as coming from President Goodluck Jonathan and whom he said sent his greetings.

On Professor Adebambo's alleged refusal to harken to his master's instruction to address the aggrieved musician, the AGF took a swap at the NCC DG whom he accused of acting like a sole administrator.

“The reason he has been carrying along as a sole administrator is because there is no board. I have written to the President seeking permission to constitute a board. And in constituting the board, I'm going to make sure that your interests are well represented. I'm also going to resolve this matter in the next two weeks, hold me to my words” he concluded

Chief Tony Okoroji, President of the COSON in his reaction monitored on DSTV news channel NN24 said there was no going back on the issue of who should operate as collecting society in Nigeria, stating that the matter goes beyond the powers of the NCC.